Wealthy nations well stocked with Covid-19 vaccines are gaining control of the virus while it continues to run rampant in other parts of the world, pummelling India and flaring in Southeast Asian countries that had been fending it off 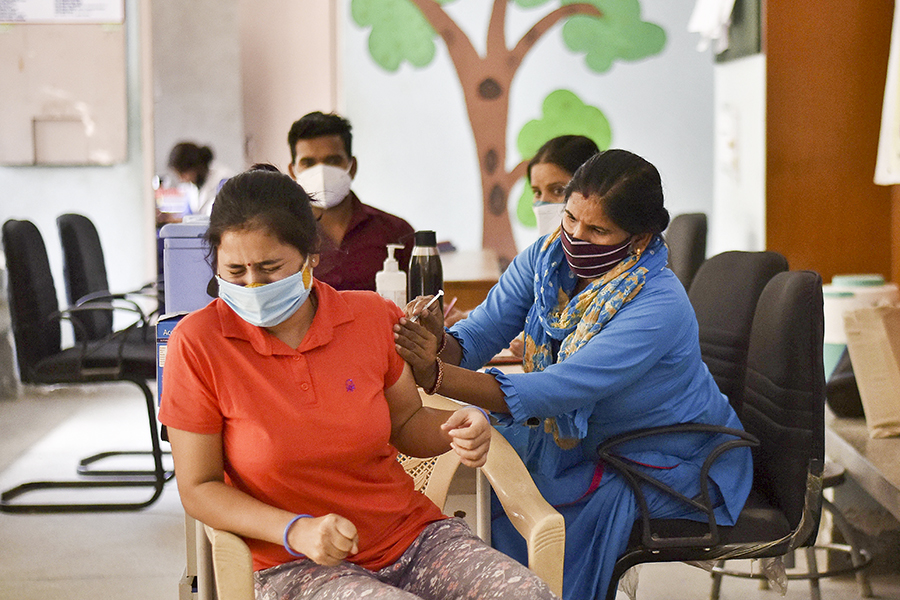 A person being vaccinated against Covid-19 at Sector 51 Urban Primary Health Centre (UPHC) at Tigra on May 10, 2021 in Gurugram, India. Finding a vaccination slot is likely to get easier for the 18+ population in Haryana this week after the state receives 3.5 lakh doses, the first tranche of its order of 66 lakh vaccine doses, from the manufacturers.
Image: Vipin Kumar/Hindustan Times via Getty Images

After a record-breaking tear, global coronavirus cases and deaths are falling as the virus recedes in the West. But world leaders and experts warn that the world is rapidly dividing: Wealthy nations well stocked with COVID vaccines are gaining control of the virus while it continues to run rampant in other parts of the world, pummeling India and flaring in Southeast Asian countries that had been fending it off.

New global cases are leveling off after rising steadily since March and peaking in late April, but the world is in danger as long as they remain at “an unacceptably high plateau,” the director general of the World Health Organization, Tedros Adhanom Ghebreyesus, said Monday.

In Southeast Asia, Tedros noted that “cases and deaths are still increasing rapidly.” Cambodia and Thailand, which had controlled the virus throughout 2020, have recorded sharp increases in infections in recent days. Malaysia went back into lockdown Monday, two days after recording its highest daily case total since January.

Scientists warn that if the virus is allowed to spread unchecked in parts of the world with lower vaccine coverage, dangerous variants will continue to evolve, threatening all countries.

“Globally, we are still in a perilous situation,” Tedros said. About 783,000 new cases are reported on average each day globally, nearly half in India, where a virus variant, B.1.617, has been spreading.

The WHO deemed B.1.617 “a variant of concern” on Monday. Other variants of concern include B.1.1.7, first identified in Britain and now dominant in the United States, and P.1, originally detected in Brazil.

In the United States and Britain, where vaccines have been widely deployed, the virus is subsiding, and people are flocking back to restaurants and other attractions. Vaccines could soon be available to even more Americans, after the Food and Drug Administration authorized the use of the Pfizer-BioNTech shot for 12- to 15-year-olds on Monday.

Dr. Robert Schooley, chief of the infectious diseases division at the University of California San Diego, said that the global rate of cases “remains quite volatile.”

“We’re going to see a bit of a ‘whack-a-mole’ situation for some time to come as local and regional outbreaks flare up and burn out,” Schooley said. “This will continue to be the case as long as a substantial fraction of the global population is not vaccinated with one of the highly effective vaccines.”

Tedros said Monday that “vaccines are reducing severe disease and deaths in countries that are fortunate enough to have them in sufficient quantities.”

Less than 10% of India’s vast population is even partly vaccinated, offering little check to its onslaught of infections. In Africa, the figure is slightly more than 1%.

That “shocking global disparity,” Tedros said, “remains one of the biggest risks to ending the pandemic.”

Still, he added, there are other public health tools besides vaccinations, like distancing and mask-wearing, that help prevent transmission and haven’t been fully deployed, he said.

“My message to leaders is: Use every tool at your disposal to drive transmission down right now,” he said. In India, criticism has been directed at Prime Minister Narendra Modi and his government, which allowed hundreds of thousands to gather at a large religious festival and held campaign rallies even as the virus surged.

And even for countries that have vaccinated large portions of their populations, Tedros warned against premature celebration, urging them to brace for variants that could evade vaccines.

Saskia Popescu, an infectious-disease expert who is an assistant professor at George Mason University, said that Americans should not be lulled into thinking the virus is defeated, because “we have to see the crisis in India as a wake-up call for global vaccine equity and that COVID-19 isn’t gone anywhere until it’s gone everywhere.”