A business model built around online product and price discovery with the user promise of hard cash in the bank has helped CashKaro step on the gas in the pandemic year—and, in the bargain, build some serious street cred 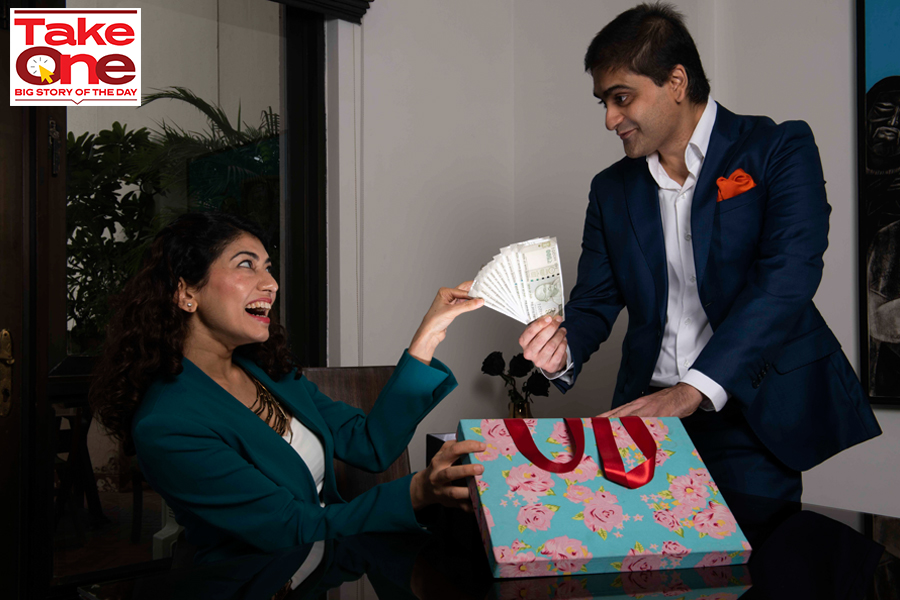 It sounds ridiculous. Well, that’s how the TV commercial of a credit card payment platform starts. When you pay your credit card bills on Cred, proclaims the protagonist in the advertisement aired recently that featured former cricketer Rahul Dravid, you earn Cred coins, which can be used to claim cashbacks and rewards. “I know this sounds ridiculous,” he exclaimed.
He wasn’t alone. Elsewhere, a startup founded five years before Cred also found the promise outlandish, but for a different reason: The cashback it offers is not in the form of ‘points’ or ‘wallet cash’ or ‘coins’. It’s hard cash that can be transferred to users’ bank accounts or redeemed as Amazon or Flipkart gift vouchers.

That’s the unique selling proposition of CashKaro, which claims to be India’s biggest cashback and coupons player. And to drive it home, the venture created an ad film called The Magic of #CashOverCoins, a not-too-subtle dig at Cred, the three-year-old startup that turned unicorn in April, with a series D funding round of $215 million; in fiscal year 2020, the startup that is now valued at $2.2 billion racked up a loss of Rs 360 crore on revenue of Rs 52 lakh.
CashKaro has few illusions of joining that league (in terms of valuation as well as red ink). Raising $10 million at a modest valuation after its last round in September 2020, it showed losses of Rs 7 crore on a top line of Rs 57 crore in FY20. And the founders claim to be back on track, after hitting a speed bump a couple of years ago. “Over 1 crore members have saved Rs 500 crore using CashKaro,” co-founder Swati Bhargava wrote in an email celebrating eight years of CashKaro last month. 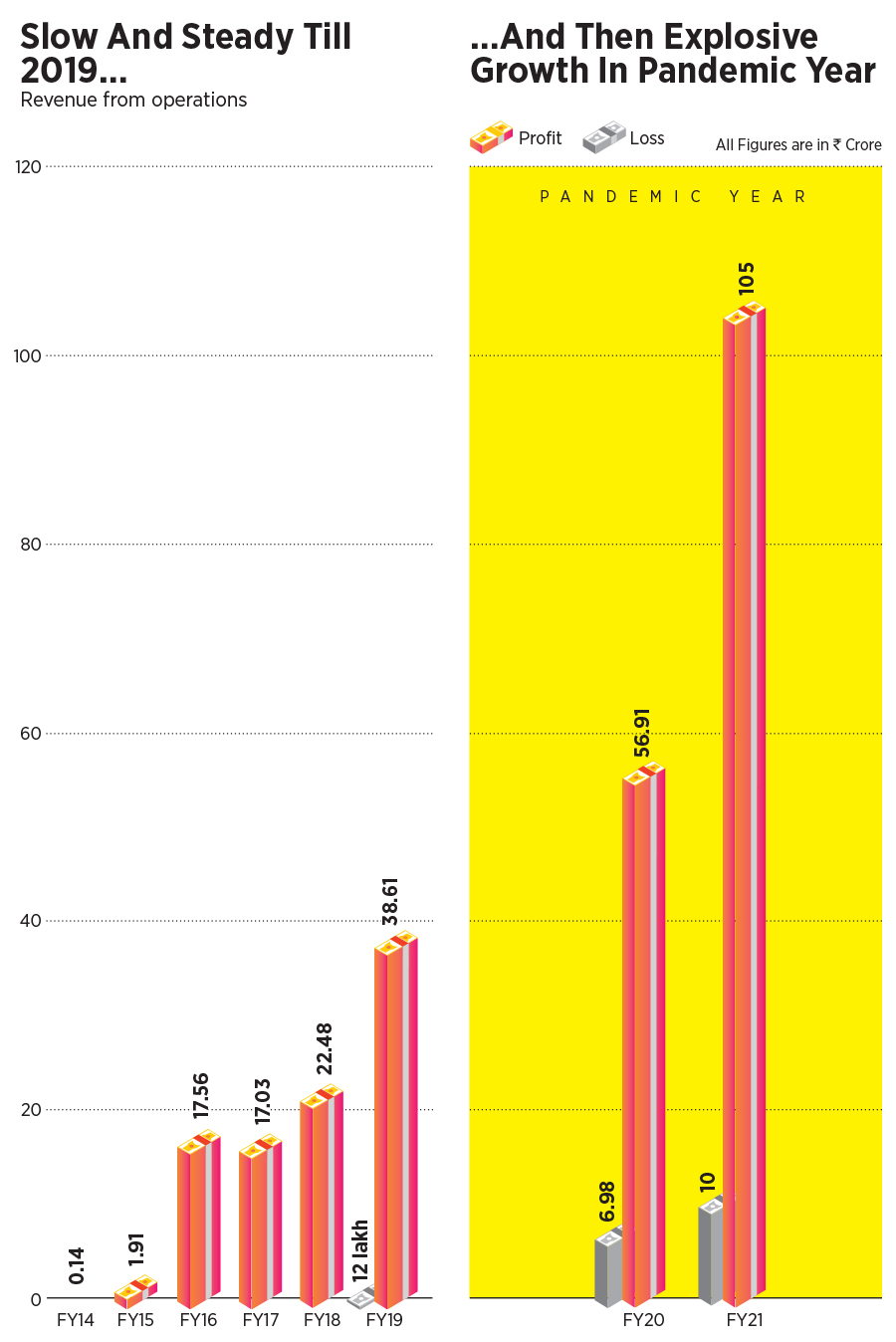 The husband-wife duo of Rohan and Swati Bhargava started CashKaro out of a one-bedroom apartment in London in 2013, after-ditching cushy jobs at Goldman Sachs. ‘How many people shopped online in India,’ asked some of the angels who the duo approached for funding in London. The concept of cashbacks too sounded, well, ridiculous.
The beginning was slow and steady. In two years, revenue was just under Rs 2 crore in FY15, but the user base was galloping: From 40,000 to 2.5 lakh in just a year. It wasn’t long before investors got interested and, by 2015, CashKaro had raised Rs 25 crore in a series A round from Kalaari Capital. But the funding didn’t change the frugal mindset the startup had adopted from the outset. “The thinking was to make the money last long,” points out Swati. Growth, though, wasn’t compromised, and by FY16, operating revenue was up to Rs 17.56 crore; and the startup was in the black.

Then came a period of stagnation. “We should have used our series A money faster,” says Swati. The money raised in 2015 was conserved; it was neither used on marketing nor on hiring. When you are building your business, she explains with hindsight, one must invest in the brand and not look at everything through the lens of return on investment. Cash burn may not be a sin for a company that has got its fundamentals right.
By 2019, CashKaro decided to step on the gas. More marketing dollars were allocated; extra hiring was allowed; and new categories were explored. The cashback player ventured into social commerce with EarnKaro. The idea was simple: Let savvy online shoppers earn money whenever anyone shops via their EarnKaro links. This is how it works. A user simply logs on to the EarnKaro app and shares deals from popular shopping sites such as Ajio, Flipkart and Myntra. These deal links are then shared to the social network of the user via WhatsApp, Facebook and Instagram. Whenever anyone shops via the user’s link, they earn a certain percentage as cashback. This is how a user saves and earns. 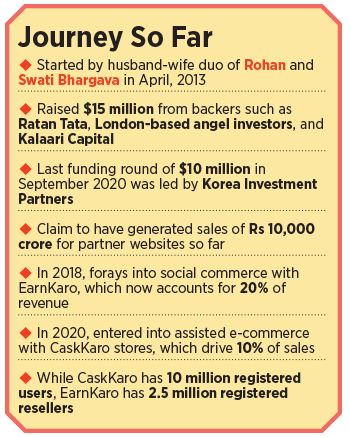 Swati, though, decided not to save. “Now was the time to spend to grow,” she recalls, as the co-founder didn’t lift her foot off the pedal in the pandemic year. CaskKaro forayed into the assisted ecommerce space with ‘CashKaro Stores’ in rural India in August 2020, and closed a funding round of $10 million, led by Korea Investment Partners last September.
A year later, the gambit seems to have paid off. CashKaro has almost doubled its revenue in FY21, from Rs 56.91 crore in FY20 to Rs 105 crore (unaudited). EarnKaro accounts for 20 percent of that top line. CashKaro has over 10 million registered users, and Swati has taken the offline store count to over 4,000 kiranas across the hinterlands in Bihar, Jharkhand, Haryana, Punjab, and south India.
Last year, CashKaro increased its marketing spend by 60 percent, thanks in the main to the $10 million funding round. “It enabled us to grow our revenue and customer base,” claims Swati. The traffic, she let on, from tier 2 to 6 towns and cities now accounts for over 50 percent of monthly visitors.
What also helped in pushing sales was partnering with a bunch of direct-to-consumer startups and online players such as Mamaearth, Ajio, Tata Cliq, The Man Company and Beardo. If mobile and electronics as categories drove sales for CashKaro till 2019, last year the space was taken up by players in the beauty, personal care, fashion, edtech, OTT, gaming, health and men’s grooming segments. Thanks to Covid-19, a new wave of first-time online shoppers also pushed sales. “CashKaro has seen incredible growth over the last two years,” says Rohan. The funding last year, he adds, is being used to tactically scale up marketing, open new brand-building avenues, user-acquisition, product development, hiring new talent and expand EarnKaro, which now has 2.5 million users.

CashKaro, underlines Rajesh Raju, managing director at Kalaari Capital, is the market leader in online product and price discovery with an added incentive of cashback. CashKaro becomes invaluable to millions of customers looking for a good deal and to thousands of brands and marketplaces striving to get their products discovered, he explains. The various channels the company has forayed into, including social selling through EarnKaro and its assisted ecommerce through the CashKaro offline network, will help the company expand the offering to millions of more customers, he adds.
Back in 2017, CashKaro planned to add a few more million users. The route selected, though, was unconventional. Card-linked offers—the process of providing customers with targeted offers based on their purchase behaviour—was what the husband-wife duo was taking a stab at. The idea definitely made sense as it’s a billion-dollar industry in the US. Back then, CashKaro partnered with one of the top private banks to launch a card-linked offer programme, which provided online and offline shoppers with personalised merchant deals. The partners built a robust offer and personalisation engine, which analysed preferences and spending patterns of debit and credit card users, and matched them with cashback offers from different retailers like Starbucks and Lifestyle. The offer would be activated on the card and cardholders simply had to swipe their card to get the offer. “The concept was great, and technology was brilliant,” recalls Rohan, who was confident of success.
The experiment bombed. With multiple POS (points of sales) and payments systems, finding a single standard solution for reconciliation and reporting was very time intensive, Rohan explains. The marketing infrastructure too was missing. CashKaro lost the crucial focus in its growth years. Rohan doesn’t regret it. As entrepreneurs, he explains, one needs to experiment. “Some work, some flop, and some become blockbusters,” he says.
The blockbuster move for CashKaro, reckon venture capitalists, was a sharp focus on the bottom line. For a company that always had fixed the issue of unit economics from the beginning, it was a question of when to step on the gas, says Anil Joshi, founder of Unicorn India Ventures. “You can keep on adding floors if the building is built on a strong foundation,” he says. At times, he explains, entrepreneurs need to cut loose. “Swati and Rohan started spending at the right time,” he says.
Meanwhile, in Gurugram, the co-founders are getting itchy to run at a faster pace. “A lot has happened over the last eight years, and a lot more is yet to come,” says Swati, who is not worried about the losses. Two years ago, she points out, CashKaro was nearly at breakeven with an annual loss of Rs 12 lakh. With the underlying fundamentals staying strong and unit metrics remaining positive, a decision was taken to increase marketing spend and build brand awareness. Though this meant a rise in losses, the co-founders were fine with it. “In absolute amount, these numbers [losses] are small,” she says.
Which also gives the startup a financial report card with some serious street cred.

Tweets by @forbesindia
Global cases are falling, but virus surging in countries that had kept it under control
Future of Healthcare—Focus should be on preventative and holistic care for all: Viren Shetty