Five years ago Rajat Jaiswal co-founded the desi burger chain that now has 60 outlets across 21 cities. And he's steering clear of putting the business in auto-pilot mode 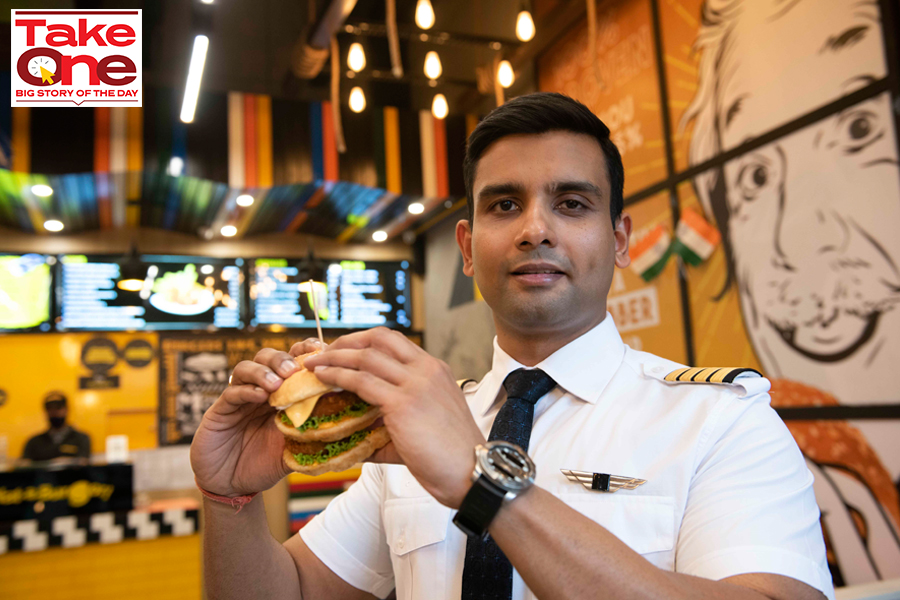 Good morning ladies and gentlemen, this is your captain speaking’…a baritone voice echoed across the cabin. The 7am flight from Delhi to Ranchi was delayed by 15 minutes. “Extremely sorry for the late departure,” Rajat Jaiswal warmly apologises, “but don’t worry, we will land on time.” The weather is good, the 35-year-old lets on in his balmy voice, the seat belt signs have been turned off, sit back, relax, enjoy your breakfast and some cool music. The captain goes on to play an Elvis Presley chartbuster, and takes a big bite of a burger. “Wise men say, only fools rush in…”
11am in Ranchi. Jaiswal rushes to an eatery, just a few kilometres from the Birsa Munda airport. “Welcome, Captain. What can we get for you?” a young man behind the counter of Wat-a-Burger, a burger brand with 60 outlets across 21 cities, greets him. “Aloo achari burger,” Jaiswal replies. “I had one on the flight but I want to taste it again.” The outlet stands out for its bright interiors--yellow chairs, white-black checkered floors, a bunch of fluorescent lights hanging from the ceiling.
Ten minutes later, Jaiswal takes a bite of the vegetarian patty and bun loaded with spicy potato. “This is perfect,” he says with a smile, relishing the spicy taste. “The one I had in the morning was less tangy.” The pilot wants to get on a call with the cook at the Delhi outlet. The problem, Jaiswal says sternly, as he storms into the kitchen of the 800 sq ft outlet after donning a chef’s apron, needs to be fixed. “Aye, Captain,” replies the cook.
Meet Rajat Jaiswal, a high-flying pilot with over 7,000 hours of flying experience and co-founder of Noida-headquartered burger brand Wat-a-Burger. From Gorakhpur in Uttar Pradesh to Ranchi in Jharkhand, from Vadodara in Gujarat to Jaipur in Rajasthan, the desi burger chain has mushroomed across smaller towns and cities in 11 states over the five years since it opened its first outlet in Noida in February 2016. 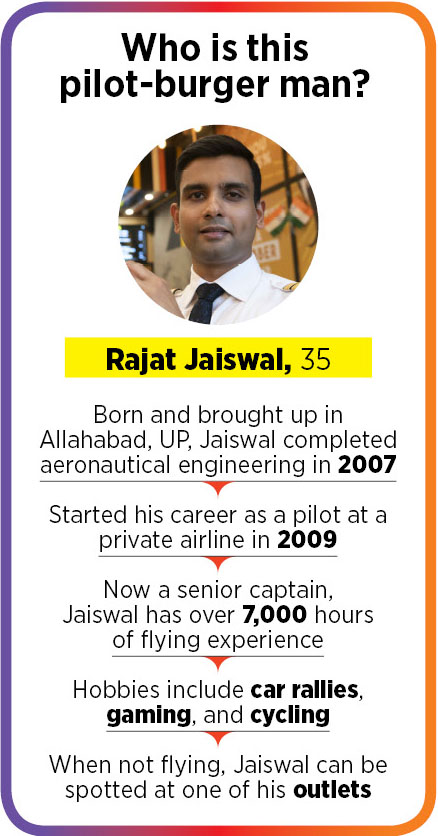 Co-founded by Jaiswal and his childhood friend Farman Beig, Wat-a-Burger boasts of a sizeable presence in top cities as well: 17 outlets in Delhi, six in Gurugram, five in Hyderabad and one in Mumbai. The idea is simple. India, Jaiswal underlines, always had room for a local player, a desi burger brand which is better-placed in terms of understanding the local palate and preferences. “Remember Jughead from Archie comics?” asks Jaiswal. The guy, he points out, had the ability to consume absurdly large quantities of burgers in a single sitting without getting sick or gaining weight. “Well, that’s how we expect every Wat-a-burger fan to be,” he says.
The menu is eclectic. From butter chicken and tandoori chicken makhni burger to Indian chaat fries and aloo achari burger, there’s a burger for virtually every Indian, with fillings and ingredients picked from their regular diet. “Now who doesn’t like aachar (pickle),” says Jaiswal smiling, as he takes a swig of a kesar pista shake. Co-founder Beig opts for a paneer tikka sandwich as the duo move into the cockpit--read front counter—of the small outlet. “I don’t like business to be in auto pilot mode,” says Jaiswal, as he gazes out of the small window.
Once you put the flight in auto-pilot mode, there is little for you to do, explains Jaiswal, a pilot since 2009. During his school days in Allahabad in Uttar Pradesh, he recounts, teachers used to scold him for gazing out of the window. ‘Staring out won’t help you in making money’ was the jibe. A decade later, this is what Jaiswal ended up doing most of the time. “And I am getting paid for that,” he smiles.

What Jaiswal was not getting paid for was his spare time, something most pilots have plenty of. “It’s not 9 to 5 office work,” he says, adding that he wanted to make the most of the extra time after flight hours. His friend Beig, who returned from the UK in 2015 after finishing his business studies, was running a small IT firm in Lucknow. The duo decided to do something bold and adventurous. The ETA (estimated time of arrival) of Wat-a-Burger was around February 2016, and the flight did land on time. 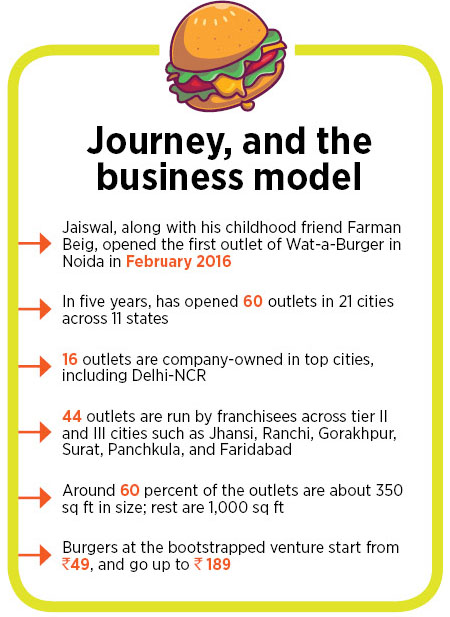 But why food? The duo could have flirted with any other segment like fashion or gaming, common hobbies of the friends. Food, explains Jaiswal, is recession-proof. “There is a food for every mood,” he says. “You cut down on everything but not on food.” Now who understands the perils of recession or a slowdown better than a pilot? The first segment to feel the heat is hospitality and aviation. Having a business family background--Jaiswal’s family was in trucks and transportation—also helped in making the smart move of ditching pizzas.
The friends opted for a burger joint. The reasons were many. One, burgers are easy to make. “It’s more of an assembling job,” contends Beig. You have patties and a bun, and all one needs to do is add sauce, mayo, tomato, onion, and the like. As one goes about expanding the footprint, maintaining a consistent taste in a burger is easier than in pizzas. Two, burgers don’t need high investment in equipment. Three, burgers are easy to eat, carry and share compared to pizzas. And, last, the duo always felt that India had room for a desi burger player. 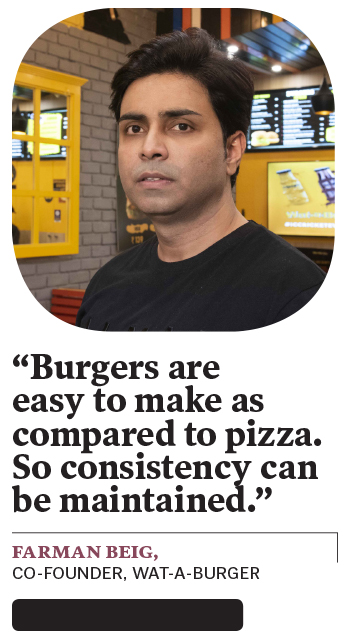 From just a crore in sales in FY17, Wat-a-Burger grew four times a year later, which was followed by another four-fold jump to Rs16.34 crore in FY19. Though the uptick remained in FY20 with close to Rs30 crore, pandemic blues acted as a speed breaker with the top line coming down to Rs13.1 crore. Jaiswal, though, is not worried about the blip, and dip, or as he would call it, a ‘desi tadka dip’ (one of the blockbuster dips that Wat-a-Burger has on offer.) The bootstrapped venture, he contends, is sound enough to survive the turbulence. Firstly, smaller towns and cities—where over 60 percent of the outlets of Wat-a-Burger are operational—have a massive appetite for a desi burger brand that recognises the local taste. Secondly, out of 60 outlets, 44 are run by franchisees. There is a lot of runway in the business, he maintains.
Back in 2016, when Jaiswal opened the first outlet in Noida, the business didn’t have a smooth take-off. The brand was new and was desi in name. In fact, not having a foreign pedigree was turning out to be the biggest obstacle in a market where the top three hamburger brands were American: McDonald’s, Burger King, and KFC. For a country used to foreign brands--the most notable local innovation by McDonald’s has been an aloo tikki burger—Wat-a-Burger didn’t appear to stand a chance. Jaiswal knew how to deal with turbulence. As a pilot, he was used to studying weather patterns and planning accordingly.

Wat-a-Burger planned a guerilla attack. Jaiswal made his store crew stand in front of a McDonald’s outlet, which was just a few metres away from the desi upstart’s store, and the captain was ready with his announcement. “Taste our burgers,” he implored. “If you don’t like them, you will get back your money,” he added. The offer remained in place for three months, and in over 90 days no money was returned. “People just loved our burgers. They were different,” he says.
Having a differentiated offering in a cluttered burger market, reckon industry experts, has given Wat-a-Burger a brisk start.

“Food in India is all about the native palette. The rule of thumb is 80 percent familiarity and 20 percent experimentation,” avers Dheeraj Sinha, chief executive officer and chief strategy officer at Leo Burnett (South Asia). Indians, he points out, have taken international food formats and given them an Indian twist. Take, for instance, the Indian-Chinese mishmash like Schezwan dosas or pizzas with chettinad chicken. Desi burger chains have the potential to do much better than the international chains if they find the right balance between the Indian palette and global format, he says. Instead of pretending to be another me-too of an international burger chain, Sinha maintains that desi brands must embrace and stay true to their roots to be successful. For example, Indians are known to love spice in their food and desi chains should not shy away from adding spicy options to their menu. “We are a country of chutneys and condiments,” he adds. 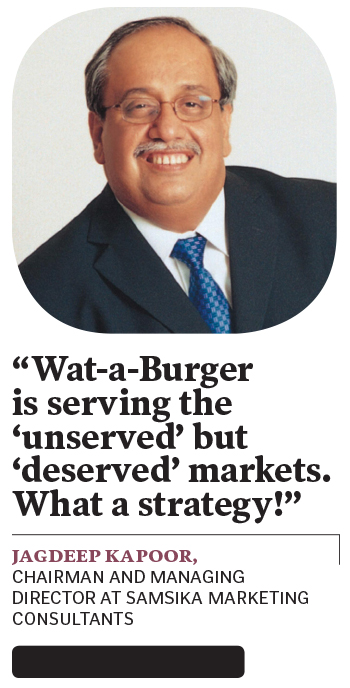 What has also helped Wat-a-Burger is its approach to go deeper into tier II and beyond. “Why should anybody from Gorakhpur need to travel to a metro to have a quality burger,” asks Jagdeep Kapoor, founder and chairman at Samsika Marketing Consultants. The desi challenger brand, he says, understood the ‘unserved’ needs of the aspirational Indian consumers in smaller towns. “Wat-a-Burger can become a brand which can reach where no burger has gone before,’ he says.
Jaiswal, for his part, doesn’t see any competition. For him, it’s a blue sky. The mindset and the vision of decades-old foreign brands in India, he stresses, can’t match the aspiration of a young, local player.
Though Jaiswal has put on the music and is enjoying the ride, one thing he needs to steer clear of is to put the business in auto-pilot mode. Getting into the franchisee business is a double-edged sword. Gazing too much out of the window means losing focus on quality, which means the business going out of the window. “Flying is a serious job, and so is business,” he says, as he gets ready for another flight to Lucknow. The cabin again reverberates with Elvis ‘…Like a river flows, surely to the sea; Darling, so it goes, some things are meant to be...’

Tweets by @forbesindia
From food, water and ORS to hygiene kits, how a Bengaluru-based NGO is helping people survive
Startup Fridays Episode 5: In conversation with Srinath Ravichandran, co-founder and CEO of Agnikul Cosmos