The pandemic seems to have hastened a worrisome decline at the box office for bread-and-butter dramas, musicals and comedies, except leviathan fantasy franchises and the occasional horror movies 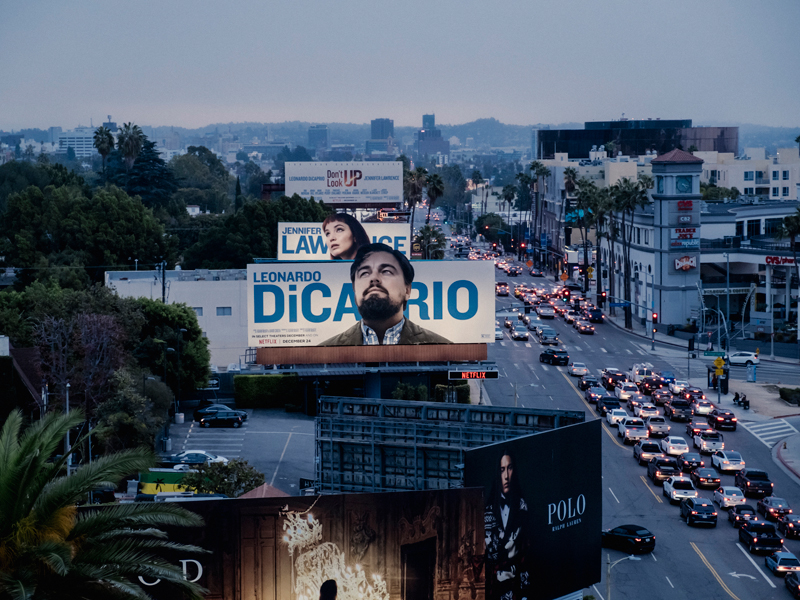 Billboards for “Don’t Look Up” feature Leonardo DiCaprio and Jennifer Lawrence, along Sunset Boulevard in West Hollywood, Calif., Dec. 16, 2021. Boldface names have always mattered at the movies, but a number of recent casts have been full of them — that hasn’t always helped at the box office. (Mark Abramson/The New York Times)

It sure seemed like a must-watch event, mixed reviews be darned. Casts so ultracelestial — embarrassments of celebrity riches — don’t come along every day.

Except that now they do.

“Someday, someone will decide to make one movie with two Batmans — oh, wait, it’s happening,” Terry Press, one of Hollywood’s top marketers, said with signature dryness. She was referring to “The Flash,” a superhero movie from Warner Bros. that is scheduled for late next year; Ben Affleck’s Batman will appear alongside Michael Keaton’s Batman.

All of a sudden, though, they are everywhere.

“Stars matter — always have, always will — and Hollywood retreats to them, leans harder on them, when it gets nervous about a wandering audience,” said Jeanine Basinger, a film scholar and the author of Hollywood histories such as “The Star Machine,” which examines the old studio system. “Stars are insurance — for studio executives who want to keep their jobs, certainly, but also for viewers: ‘Is this movie going to be worth my time and money?’ ”

Describing Hollywood’s customer base as “wandering” is rather kind. AWOL might be more apt.

The pandemic seems to have hastened a worrisome decline at the box office for bread-and-butter dramas, musicals and comedies — everything except leviathan fantasy franchises and the occasional horror movie. “Spider-Man: No Way Home” collected $260 million in the United States and Canada on its opening weekend. Total ticket sales for the two countries totaled $283 million, according to Comscore. That means “No Way Home” made up 92% of the market. “Nightmare Alley,” which was released on the same weekend, played to virtually empty auditoriums. It took in $2.7 million.

The vast majority of opening-weekend ticket buyers for “No Way Home” were under the age of 34, according to Sony.

Between Friday and Sunday, the Spider-Men remained the biggest domestic draw, taking in roughly $81.5 million. The animated “Sing 2” (Universal-Illumination) was second, with $23.8 million in ticket sales. Warner Bros. failed to generate much interest in “The Matrix Resurrections,” which took in a feeble $12 million in third place; it was also available on HBO Max.

Basinger, who founded Wesleyan University’s film studies department, noted that individual star power has faded. Studios have become fixated on intellectual property — preexisting franchises and characters. As a result, there has been less of a need to manufacture new stars and keep the older ones burning hot; Iron Man, Dominic Toretto, Wonder Woman and Baby Yoda are the stars now.

“In the old days, movie stars were the brands,” she said. “They reached the whole audience. Not a slice of the audience. Everybody. But that all fell apart. Now, it’s about adding up niches.”

In other words, few stars remain bankable in and of themselves, requiring Hollywood to stack casts with an almost absurd number of celebrities. Flood the zone.

And don’t forget Hollywood’s favorite game: Follow the leader. “The Avengers: Endgame,” which packed its cast with Robert Downey Jr., Don Cheadle, Chris Hemsworth, Scarlett Johansson, Chadwick Boseman, Jeremy Renner, Paul Rudd, Elizabeth Olsen and a dozen other boldface names, became one of the highest-grossing movies of all time in 2019. On a much different scale, an all-star remake of “Murder on the Orient Express” in 2017 was also a box-office winner.

“It’s trendy at the moment,” Tim Palen, a producer and former studio marketing chief, said of what he called an “all skate” approach to casting. “Not new but certainly symptomatic of the battle for attention that’s raging.”