Shatner, the actor best known as the heroic Captain James T. Kirk in "Star Trek," and three other passengers returned safely from a brief trip to the edge of space Wednesday 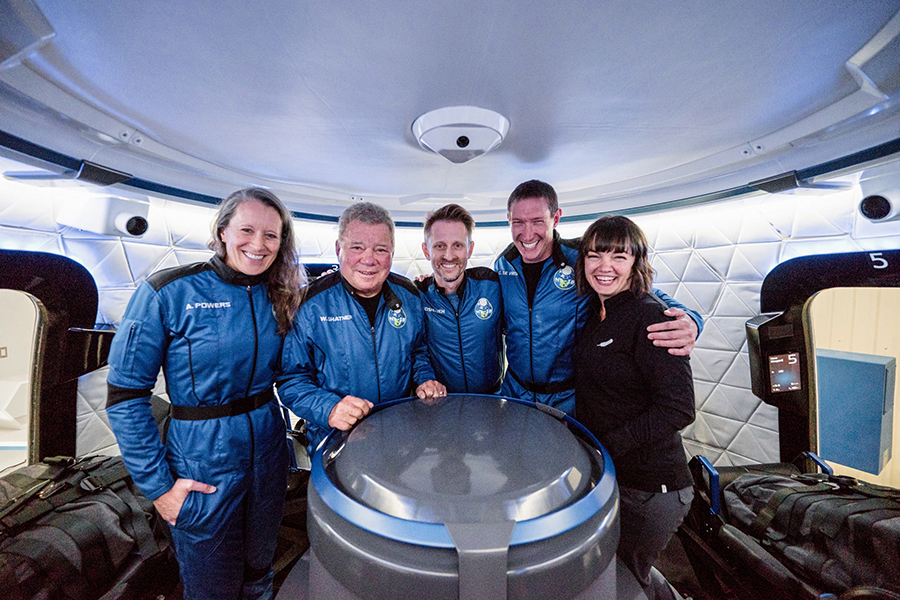 An undated photo provided by Blue Origin shows the crew of NS-18, from left: Audrey Powers, William Shatner, Chris Boshuizen, and Glen de Vries, along with CrewMember 7 Sarah Knights, a trainer, on Oct. 12, 2021. After Blue Origin’s latest launch on Oct. 13, 2021, much of the initial reaction focused more on William Shatner’s introduction to outer space than the particulars of the flight or issues with the company behind it. Image: Blue Origin via The New York Times

NEAR VAN HORN, Texas — William Shatner, the actor best known as the heroic Captain James T. Kirk in “Star Trek,” and three other passengers returned safely from a brief trip to the edge of space Wednesday. Shatner, 90, became the world’s oldest space traveler on the flight, which was the latest excursion over the West Texas desert aboard a rocket built by Blue Origin for space tourists. The private space company is owned by Jeff Bezos, the founder of Amazon and one of the wealthiest men on the planet. It was the sixth launch carrying private passengers this year, as billionaire-backed companies jockey to normalize launching humans to space. Carrying two paying passengers, the quick jaunt to space also checked off another revenue-generating flight for Blue Origin’s space tourism business, advancing competition with Richard Branson’s Virgin Galactic to attract more wealthy and adventure-seeking customers. But the successful flight and landing came amid a string of controversies for Bezos’ company, particularly charges from current and former employees that its workplace culture was “rife” with sexism and that it prioritized speed over addressing some employees’ safety concerns. The company has rebutted the criticisms, but has also faced setbacks in other lines of its business.

Tweets by @forbesindia
If you think you know it all, you stop growing: Mahesh Babu
Photo of the Day: Ram Leela