The Amazonification of space begins in earnest

What was once largely the domain of big government is now increasingly the realm of Big Tech, and the people who sold you the internet will now sell you the moon and the stars

By David Streitfeld and Erin Woo 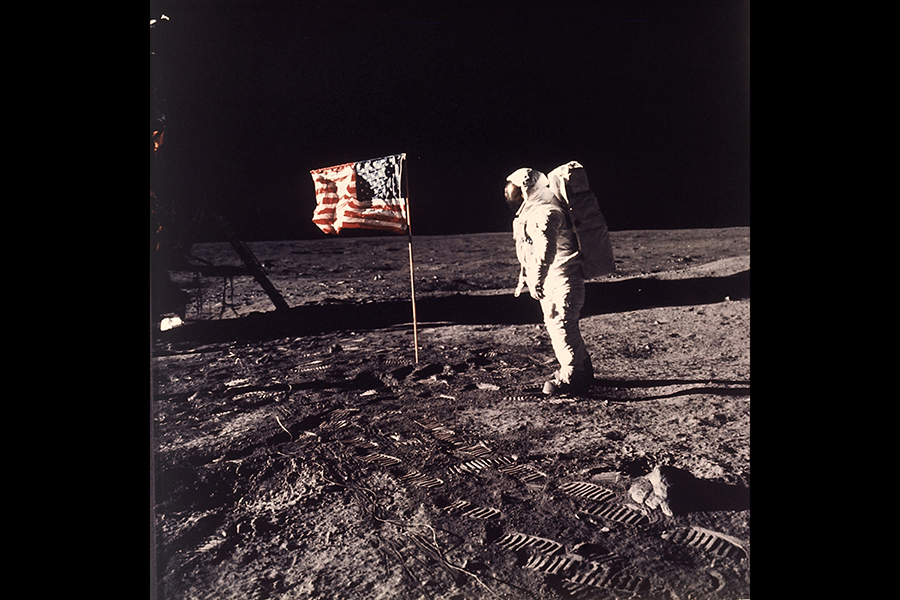 In a photo provided by Neil A. Armstrong/NASA, Apollo 11 astronaut Buzz Aldrin stands on the surface of the moon on July 20, 1969. With the suborbital flights made by Jeff Bezos and Richard Branson this month, the privatization of the space industry has crossed the point of no return. Image: Neil A. Armstrong/NASA via The New York Times

The anniversary of the Apollo moon landing marked one small step for space travel but a giant leap for space billionaires.Jeff Bezos and Richard Branson vividly demonstrated this month that soaring up to the near reaches of the sky appeared safe and, above all, a lark. The planet has so many problems that it is a relief to escape them even for 10 minutes, which was about the length of the suborbital rides offered by the entrepreneurs through their respective companies, Blue Origin and Virgin Galactic.  But beyond the dazzlement was a deeper message: The Amazonification of space has begun in earnest. What was once largely the domain of big government is now increasingly the realm of Big Tech. The people who sold you the internet will now sell you the moon and the stars.

Bezos, the founder of Amazon and still its largest shareholder, made clear at the news conference after Tuesday’s flight that Blue Origin was open for business. Even though tickets were not generally available, sales for flights were already approaching $100 million. Bezos didn’t say what the price for each was but added, “The demand is very very high.”  That demand was there even before the world’s media flocked to Van Horn, Texas, for extensive and adulatory coverage of Bezos doing something Branson had done in New Mexico the week before. They saw a carefully orchestrated event, with the world’s oldest-ever astronaut and the world’s youngest along for the ride, capped by a $200 million philanthropic giveaway.  Even Elon Musk, chief executive of rival SpaceX and a sometimes skeptic of Bezos’ space dreams, felt compelled to offer his congratulations. So did Branson, who got bragging rights by making his flight first. Musk went to see Branson off.  All of this space activity is the start of something new but also a replay of the 1990s. At the beginning of that decade, the internet was government property devoted to research and communication for a few. By the end, thanks to Bezos more than anyone, it was a place for everyone to buy things. Over the next 20 years, tech grew up and became Big Tech, provoking bipartisan fears that Amazon, Facebook, Google and Apple are now too powerful.  Outer space might now be embarked on a similar journey from frontier to big business.  For decades, NASA did not get enough funding to do anything as epic as the Apollo program. The Trump administration decreed a return to the moon by 2024. The Biden administration has endorsed the goal but not the date. If it happens at all, it will be with the assistance of companies like SpaceX and Blue Origin. In contrast to the Apollo project in the 1960s, the next trip to the moon will be outsourced. Smaller space ventures are even more wide open to entrepreneurs.  “If you look at where space is today, especially with respect to lower Earth orbit activities, it really is similar to the early days of the internet,” said West Griffin, chief financial officer of Axiom, a startup aiming to build the first commercial space station.  A swelling ecosystem of startups is attempting to commercialize space by building everything from cheaper launch technology to smaller satellites to the infrastructure making up the “pickaxes and shovels” of space’s gold rush, as Meagan Crawford, a managing partner at the venture capital firm SpaceFund, puts it.  “People are looking around going: ‘There’s this robust space industry. Where did that come from?’ ” Crawford said. “Well, it’s been built methodically and purposefully, and it’s been a lot of hard work over the last 30 years to get us here.” The first space race, which stretched the length of the 1960s and then ran out of steam in the 1970s, pitted a brash can-do United States government against a malevolent and charmless Soviet Union. The Americans won that competition, although critics argued that it was all a mistake in an era when so many domestic issues needed attention and money.  This time? Pretty much the same, although now it’s personal. A petition requesting that Bezos not be allowed to return to earth drew 180,000 virtual signatures. Sen. Elizabeth Warren, the Massachusetts Democrat, tweeted: “It’s time for Jeff Bezos to take care of business right here on Earth and pay his fair share in taxes.”  In an interview with CNN on Monday from the Texas launch site, Bezos said his critics were “largely right.”  “We have to do both,” he said. “We have lots of problems in the here and now on Earth, and we need to work on those. And we always need to look at the future.”  But it’s clear which perspective engages his attention. As valedictorian of his high school class in 1982, Bezos talked about the importance of creating a life in huge free-floating space colonies for millions of people. “The whole idea is to preserve the earth,” The Miami Herald quoted him as saying at the time, adding that his ultimate objective was to see the planet “turned into a huge national park.”  Bezos said much the same thing this week. It was a utopian dream with many complicated moving parts — just like, on a smaller scale, the notion of a retailer that would sell everything to everyone and make deliveries in hours. And to the surprise of nearly everyone, he made that work.  Branson has started another space offshoot, Virgin Orbit, that is launching small payloads to orbit. He has not hinted at grandiose visions like Musk and Bezos for spreading civilization into the solar system.  Musk’s Mars dreams began with a small quixotic quest: He wanted to send a plant to Mars and see if it could grow there. But the costs of launching even a small experiment were prohibitive. Even options in Russia were out of reach. So Musk founded SpaceX in 2002.  Today, he wants to send people, not plants, to Mars. SpaceX is currently developing Starship, large enough to make the journey, and Starlink, a satellite internet constellation, which aims to generate the profits needed to finance the Mars plans.  As it pursues those goals, the company has become a behemoth in the space business. NASA relies on SpaceX rockets and capsules to send astronauts and cargo to the International Space Station, and private, government and military satellite operators fly the reusable Falcon 9 booster rocket to orbit.  NASA recently awarded a contract to SpaceX to use its Starship prototype for the moon program. The contract was challenged by Blue Origin and another firm, Dynetics. For all the camaraderie on display this week, the billionaires play to win.

Tweets by @forbesindia
Photo of the day: Out with the old, in with the new guard
Covid-19 test kits are getting more innovative in India. Here's how