With just days to go before a major UN climate conference in Scotland, Australia is one of the last holdouts among developed nations in committing to net zero emissions by 2050, and it has refused to strengthen its 2030 target or make plans for transitioning away from its deep investment in fossil fuel production 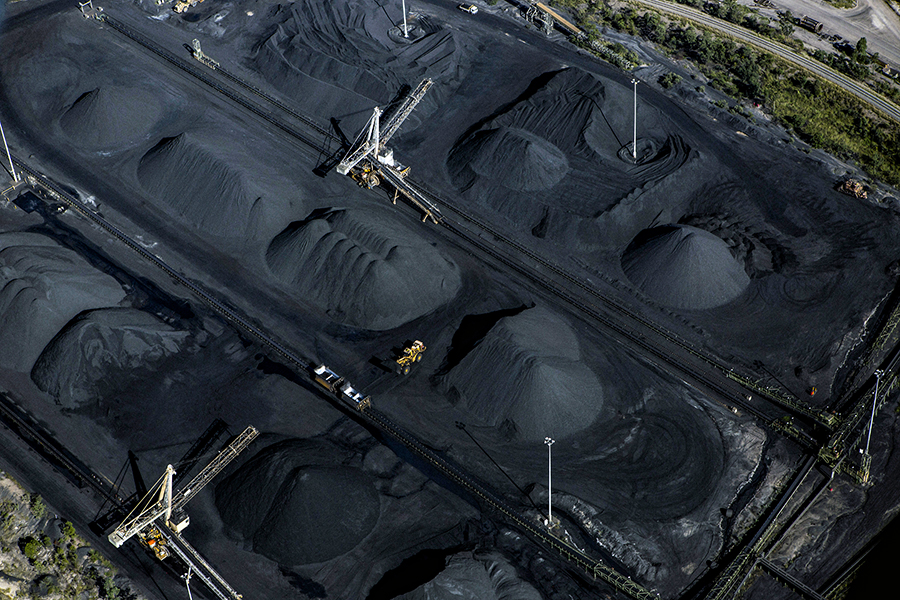 The Collinsville coal mine in Queensland, Australia, on July 5, 2017. The country is the world’s largest coal exporter.

Image: David Maurice Smith/The New York TimesAt a time when climate change and those who fight it demand that coal be treated like tobacco, as a danger everywhere it is burned, Australia is increasingly seen as the guy at the end of the bar selling cheap cigarettes and promising to bring more tomorrow.
Along with koalas, kangaroos and beaches, the country—the world’s third-largest exporter of fossil fuels—is becoming known for refusing to clean up its act.

With just days to go before a major U.N. climate conference in Scotland, Australia is one of the last holdouts among developed nations in committing to net zero emissions by 2050, and it has refused to strengthen its 2030 target or make plans for transitioning away from its deep investment in fossil fuel production.
The country’s prime minister, Scott Morrison, only recently agreed to attend the climate summit after criticism from Queen Elizabeth II and a crowdfunded billboard in Times Square that mocked his reluctance to address climate change, calling him “Coal-o-phile Dundee.”
“The government and the opposition are captured by the coal and gas industries,” said Adam Bandt, the leader of the Australian Greens and a member of Parliament from Melbourne. “It’s a version of a petro-state.”
Australia’s inertia points to a pressing challenge for the world: how to get places that profit from a dangerous product to transition before it becomes too late. With the threat of even more damaging storms and fires looming if temperatures keep rising, a combine-and-conquer approach is required—fossil fuel users and producers both need to kick the habit. 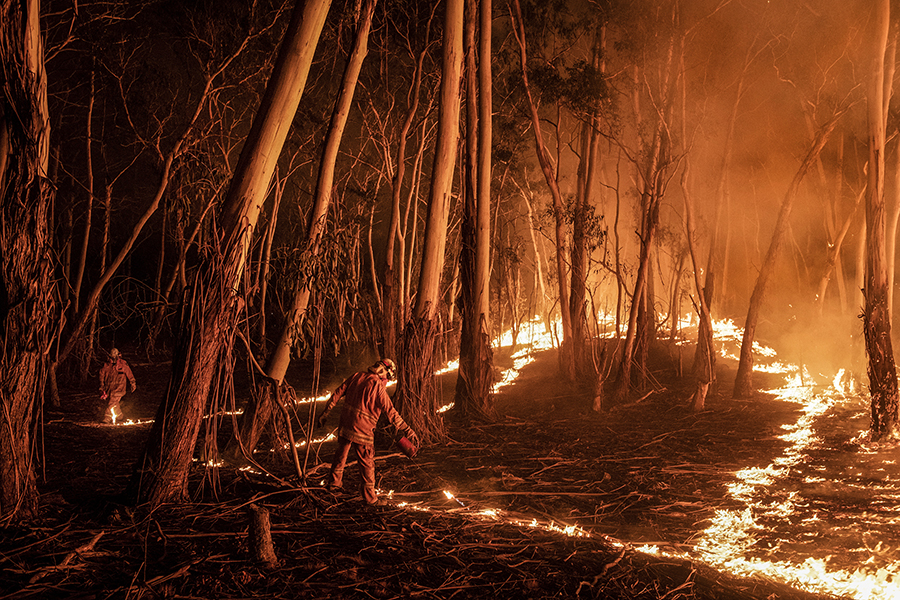 FILE—Volunteer firefighters battle a blaze near Cathcart, Australia, on Jan. 30, 2020. Some parts of Australia have not recovered yet from the summer fires of 2019 and 2020.
Image: Matthew Abbott/The New York Times
The kings of carbon are not in a rush. A U.N. report released Wednesday found that coal, oil and gas production will keep growing at least until 2040, reaching levels more than double what is needed to prevent a catastrophic rise in global temperatures.
Australia is a major contributor to the problem. In energy terms, the continent is essentially a bigger version of West Virginia: Coal is still king, natural gas is celebrated and the conservative government has a lot in common with Sen. Joe Manchin, D-W.Va., who has blocked President Joe Biden’s sweeping plan to shift the country toward renewable energy.
Progress seems to be glacial in many places, but the momentum in Australia is not just slow. The country’s leaders are still actively heading in the wrong direction. The Great Barrier Reef may be bleaching from the heat and acidity caused by climate change; towns and families burned out by the Black Summer fires of 2019 and 2020 have yet to fully recover. Yet Australia’s leaders continue to invest in what they know, defying their own constituents and increasingly the world.
American, British and U.N. officials, along with Australia’s vulnerable Pacific island neighbors, have repeatedly given the same message to the Australian government: More must be done.

Expanding what should be curtailed

In May, the International Energy Agency released a detailed overview of what it would take to cut carbon dioxide emissions to net zero by 2050 and keep the average global temperature from increasing by 1.5 degrees Celsius over preindustrial levels — the threshold beyond which the Earth faces irreversible damage.
Near the top of the list: end investment in new sources of fossil fuels.
Australia’s response? Yeah, nah. 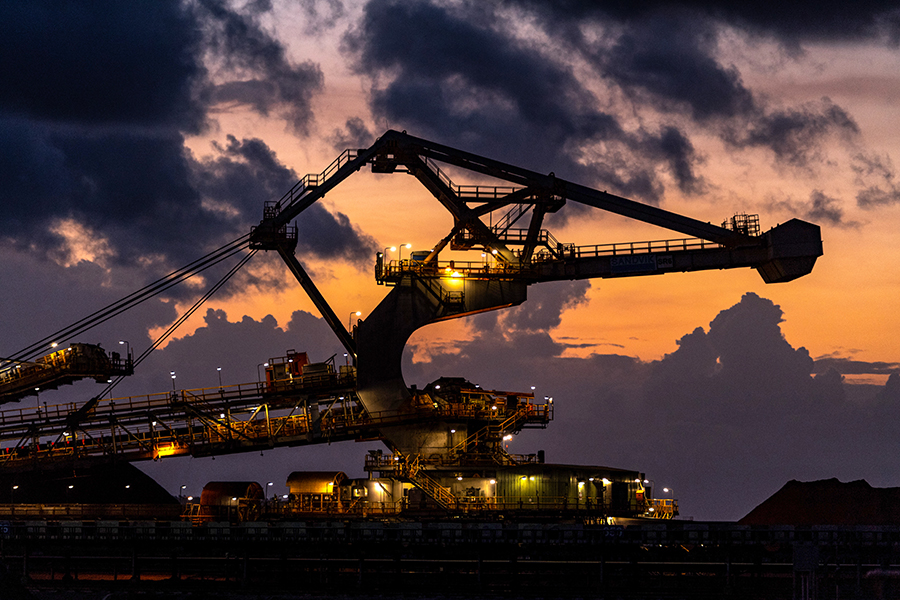 FILE — The Hay Point Coal Terminal, south of Mackay, Queensland, Australia, on Oct. 2, 2019. The country has fallen behind other developed nations in its commitment to slashing carbon emissions.
Image: Matthew Abbott/The New York Times
The federal government still revels in Australia’s role as the world’s largest coal exporter. A report from the Department of Industry, Science, Energy and Resources last month used a medal icon in denoting the country's status as the world’s coal leader, expected to ship out 439 million tons this year, up from 400 million tons last year.
In the last month alone, three new coal mining projects have been approved. In New South Wales, a production hub for the thermal coal burned in power plants — some of the biggest contributors to global emissions — proposals for 20 new coal mines are under review. And that does not include a giant project in the state of Queensland, where the Indian industrial giant Adani is trying to build the largest coal mine in the world.
Nor does it include Australia’s expansion of natural gas. The government plans to open at least five new gas fields, including the giant Beetaloo Basin project in the Northern Territory, which has been granted subsidies of around $170 million. The tax breaks given to the fossil fuel industry last year alone were worth more than what Australia spends on its army — and the federal resources minister, Keith Pitt, said this month that the government should spend even more to protect coal and gas.
Critics argue that it is all the product of a warped political and media culture that has spent decades doing the industry’s bidding while deceiving the public, exaggerating coal employment and understating the need to reverse course. Federal elections are often won or lost in the coal areas of Queensland, and with another contest due next year, the coalition government’s junior partner, the National Party, which represents regional areas, is playing a familiar hand.
“For at least 10 years, they’ve been telling people that climate change is rubbish, that it doesn’t exist, that we can continue digging up and burning coal forever and a day,” said Zali Steggall, an independent member of Parliament who unseated a former prime minister, Tony Abbott, in 2019 with a campaign focused on climate. “They have a difficult job now in turning around to those communities and saying we were wrong or misleading you and we need to do this.”
Richie Merzian, the climate and energy director at the Australia Institute, a progressive research organization, said the task was made more difficult by “the very strong connection between the fossil fuel lobby and Australia’s government.”
To illustrate the point, he cited Brendan Pearson. As the chief executive of Australia’s Minerals Council, Pearson oversaw a series of ads in 2015 declaring that “coal is amazing.”
He also famously supplied Morrison with a lump of coal that he held up in Parliament two years later, declaring: “This is coal. Don’t be afraid.”
Pearson is now Australia’s ambassador to the Organization for Economic Cooperation and Development. Morrison appointed him last month.

Until the devastating bush fires of two years ago, Australians might not have blinked at their government’s continued support for fossil fuels. The country is responsible for less than 2% of the world’s carbon dioxide emissions.
But the Australian public has become increasingly concerned. Polls show that a strong majority of Australians want climate action even if the costs are significant, and want the government to stop approving new coal mines.
“It’s just so frustrating,” said Dan Illic, a comedian and podcast host who raised more than $100,000 for the Times Square billboard. “It’s like all of Australia can see what needs to happen except the people who are getting fossil fuel donations.”
There is some momentum at the local level. Several states, including New South Wales, have committed to net zero by 2050 and more immediate emission reductions that go beyond the 26%-28% cut that Australia promised with the Paris climate agreement. 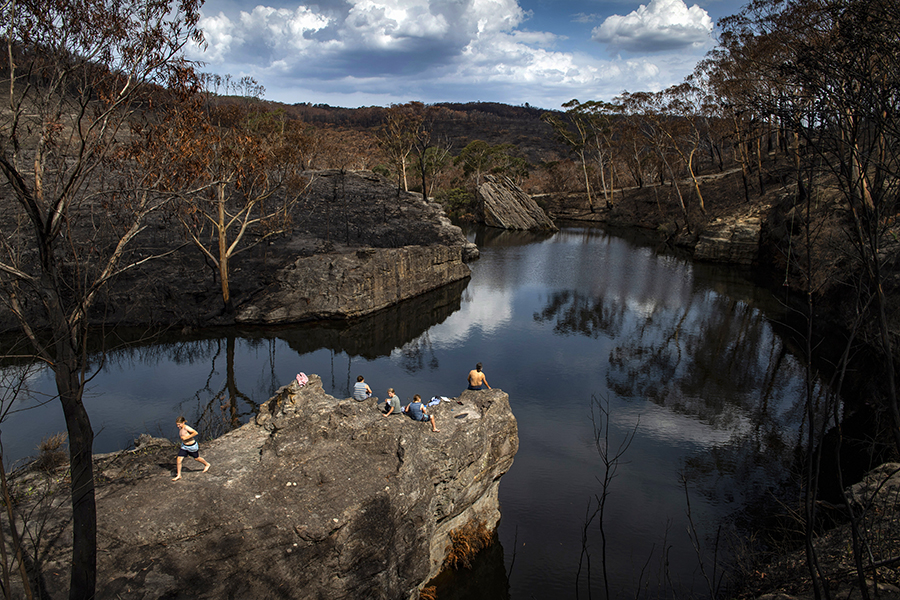 FILE — An art class in which children use charcoal from burned trees to draw in Clarence, Australia, on Jan. 28, 2020. Some parts of Australia have not recovered yet from the summer fires of 2019 and 2020.
Image: Matthew Abbott/The New York Times
Thanks also to changes in farming practices and solar panels on people’s homes, Australia’s emissions are now projected to fall by around 34% by the end of this decade compared to 2005 levels. But that decline is still weak by international standards, with the United States promising cuts of 50%-52% by 2030, Britain agreeing to a 78% decline by 2035, and Japan pledging a reduction of 46% by 2030.
More galling for many as they watch their leaders waffle and argue, Australia has enormous potential to lead the energy transition, with some of the best wind and solar resources in the world, not to mention a mining industry rich in nickel, lithium and other materials that go into batteries and other green technologies.
Even Greg Williamson, the mayor of Mackay, a city in north Queensland where coal ships can be seen off the coast, said Morrison’s coalition was stuck in “old thinking” — maintaining the addiction to fossil fuels while failing to seize new opportunities.
“We are all worried about the future, but we need leadership,” he said. “We need solutions.”

Tweets by @forbesindia
Three accessories men are borrowing from women's wardrobes
Simple and modern: The Mercedes-Benz GLA's transformation is heartening to see