Putin, facing sanction threats, has been saving for this day

Over the past several years, Putin, Russia's president, has restructured his country's economy for the specific purpose of withstanding Western financial pressure 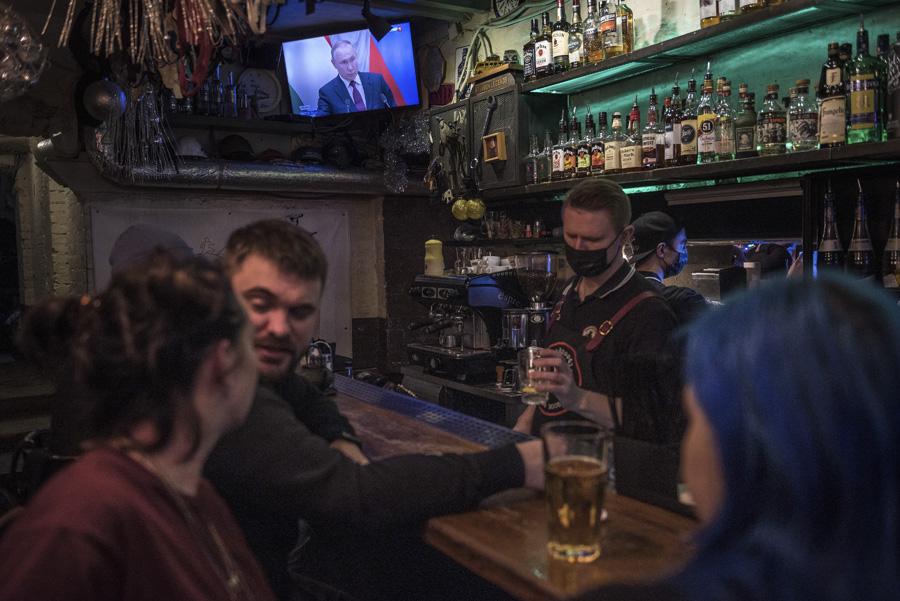 People talk at a bar as President Vladimir Putin is seen on a TV in Moscow, Feb. 1, 2022. Since paying the price for annexing Crimea in 2014, Russia has tried to make its economy sanctions-proof, hoarding currency to insulate the country. (Sergey Ponomarev/The New York Times)

Vladimir Putin’s posture toward the West through the recent Ukraine crisis seems unusually defiant, even for him. But there may be more behind his confidence than military power or empty bravado.

Over the past several years, Putin, Russia’s president, has restructured his country’s economy for the specific purpose of withstanding Western financial pressure.

Russia has drastically reduced its use of dollars, and therefore Washington’s leverage. It has stockpiled enormous currency reserves, and trimmed its budgets, to keep its economy and government services going even under isolation. It has reoriented trade and sought to replace Western imports.

Russian economic officials “are pretty proud, and have good reasons to be, for the work they have done to make the Russian economy more immune to sanctions,” said Alexander Gabuev, a senior fellow at the Carnegie Moscow Center.

This transformation, among the most dramatic examples of what is known as “sanctions-proofing” worldwide, comes less than eight years after Western sanctions over Moscow’s annexation of Crimea in 2014 mired Russia in economic and political upheaval.

Russia’s bolstered economic defenses may help explain why Putin may now be willing to stage another military incursion into Ukraine despite the lasting cost of his move in Crimea.

Still, his changes provide only a cushion against sanctions, not an impenetrable shield. The harshest measures under consideration in Washington would almost certainly break through, wreaking potentially devastating damage — though harming Western economies in the process.

Moscow’s most important economic fortification is its central bank’s stockpile of foreign currency.

All countries reserve foreign currency to cover trade and debts. Most hold U.S. dollars, because of their stability and wide acceptance. Countries that rely on energy exports usually hoard more to bridge price fluctuations.

Since 2015, Russia, by diverting oil and gas revenue, has expanded its currency reserves to a staggering $631 billion, equivalent to one-third of Russia’s entire economy. It is the fourth-largest such reserve in the world, among the largest of any petrostate’s.

“This is what gives Putin his freedom of strategic maneuver,” Adam Tooze, a Columbia University economic historian, has written.

Moscow can use those reserves to keep the ruble propped up if another wave of sanctions hits. It can also use them to cover government and corporate balance sheets.

And Putin, by paring down expenses, has kept overall debts to under two-thirds of his currency reserves.

“This strong financial balance means that Putin’s Russia will never experience the kind of comprehensive financial and political crisis that shook the state in 1998,” Tooze wrote.

Crucially, the once-dominant dollar now accounts for only 16% of Russia’s currency reserves, which Moscow has replaced with euros, China’s yuan, and gold.

It is one of many steps toward so-called “de-dollarization,” reducing Washington’s ability to use its control over dollar-based transactions to choke off Russia’s economy. Russia has also restructured corporate debts in the country to be in rubles rather than dollars, for example.

At the same time, Russia has shifted some trade to Asia. And, after 2014, when Russia imposed trade restrictions on European cheese as a retaliation for sanctions, Moscow replaced lost imports with homegrown alternatives.

Though the world scoffed at Russian Brie and Parmesan, made from palm oil rather than milk, many Russian consumers now say they are satisfied with the change. The cheese episode, though it might seem peripheral, demonstrated Moscow’s resilience to consumer shortages.

Putin has also learned how to keep Russia’s all-important political and business elite (who keep him in power the way that voters keep democratic leaders in power) loyal even under sanctions.

Russia’s heavy economic reliance on oil and gas exports is sometimes discussed as a weakness that the West might exploit.

But, if that were ever true, some analysts say, Russian economic fortifications arguably reverse the effect, making it a point of Russian leverage.

“Europe has not resolved its dependence on Russian gas,” said Emma Ashford, who studies European security issues at the Atlantic Council research group.

Russia’s tightened national budget means that the Kremlin can cover expenses as long as oil sells for at least $44 per barrel, according to international estimates. The current market price is twice this, allowing Moscow to keep government services and military budgets running even amid a severe drop-off.

And Russia’s currency reserves could displace the loss of energy exports to Europe for “several years,” Ashford estimated. Europe’s energy stockpiles, meanwhile, might only last a few months.

The United States, as the world’s leading energy consumer, is deeply vulnerable to shocks in oil and gas markets as well.

But Putin may not have anticipated the harshest measures now under discussion.

“The sanctions on the table right now, namely full blocking sanctions on the largest Russian banks, are multiple orders of magnitude stronger than those even contemplated in 2014,” said Edward Fishman, a top sanctions policy official in the Obama administration.

Under such restrictions, even with Russia’s currency reserves, “actually spending those reserves to support the ruble and maintain Russian standards of living becomes challenging,” George Pearkes, an analyst for Bespoke Investment Group, an investment firm, wrote this week.

President Joe Biden’s threat to block Russian banks from dollar-based transactions altogether would, if executed, curb banks’ ability to do business abroad at all.

“Importers would fail to pay their suppliers. Exporters would receive no new revenues. Meeting normal levels of demand for basic staples would become impossible,” Pearkes wrote, comparing the effect on Russian civilians to that of a wartime bombing campaign.

“There’s just nothing that Russia could do to protect itself from that,” Fishman said.

The move would stifle Russia’s ability to produce advanced industrial or military hardware. It might also bar Russians from purchasing smartphones or similar consumer electronics, depending on how it is implemented.

Western policymakers face a riddle: Does Putin continue to press ahead, despite Western threats exposing the weakness in his economic armor, because he considers the costs to be worth bearing or because he believes the West’s threats are empty?

“I don’t think that our sanctions threats are all that credible because of our track record,” said Fishman, the former sanctions official.

And such severe measures, on an economy as large and globally integrated as Russia’s, would be virtually without precedent. Wider shocks would be likely to also damage Western countries, whose governments are already coping with economic stress.

But there are signs that the Kremlin is bracing for the worst. Last week, Russia’s Central Bank stopped using excess oil revenues to buy up dollars altogether.

Fishman raised another concerning possibility: Putin might not grasp how vulnerable he remains, raising the risk that he would plunge Europe into both a war and the economic conflict meant to forestall it.

“It’s possible that they’re overconfident,” he said, adding that Putin’s inner circle might be telling him only what he wants to hear. “I don’t think the Kremlin is prepared for what might hit it.”