How do we fix the problem of monstrously bad city governments in India? Genuine city governance reforms are a must 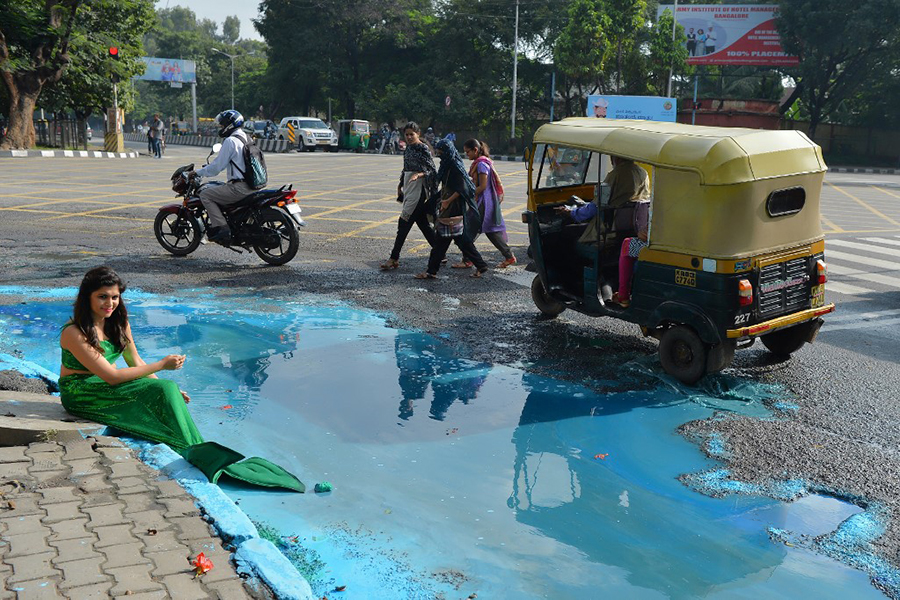 An model dressed as a mermaid takes part in an art installation by artist Baadal Nanjundaswamy to highlight the problem with dangerous potholes on roads in Bangalore. Bangalore's civic authorities have come under fire in recent time over the number of accidents blamed on potholes in the city, with heavy rains exacerbating the problem.
Image: Manjunath Kiran / AFP

I am just sick of the roads in Bengaluru. Literally! Its bumpy and dusty roads give me motion sickness. Main roads like Bengaluru’s Bannerghatta Road that began “repairs” two years ago are still “work in progress”, worsening every rainy spell. Repair and maintenance of auxiliary roads are not even on the radar. This is not the condition of Bengaluru alone. Delhi, yet again, is shrouded by a poisonous cloud that takes away almost ten years from the lives of Delhi residents. Lack of action on this front is slow collective suicide. In other big cities like Mumbai, floods are a regular occurrence. In smaller cities like Ranchi, electricity is inconsistent, making it impossible for digitally connected people to work there. For all the taxes collected, where do the funds go? They usually do not bring any visible benefits to people in tangible physical or social infrastructure. It does, however, fund a regal lifestyle of politicians and other government servants and also their monuments and advertising.

Why are Indian cities so bad? Indian cities have no government—no accountable mayor, no empowered city council. The effective executive in power tends to be a chief minister tasked with running a province that rivals the size of many major countries. The welfare of cities is just one of the many concerns they address, which they delegate to a web of overlapping ministries and agencies with different figureheads. Usually, the delegation of accountability is not clear. Who is responsible if a road is not being repaired? The CM, the MP, the MLA, the Mayor, the minister of transport, some local transport bureaucrat, the DM? Even with 70 years of democracy, we still don’t know.

The problem of governance in India is systemic. Indian democracy was not designed with cities in mind. While municipal and village governments were later created with devolution (like the 1993 reforms), the powers these local governments wield are largely ceremonial. We do not know who is the mayor of any of the big cities. Delhi, which was evolving a system of local autonomy, has also been handcuffed in the past few years as the centre and the Delhi government jostle for power. There is an ever-greater trend towards centralisation, which is ironic for a country that claims to be the world’s largest democracy. Even China, a ruthless autocracy by most standards, offers greater powers to its local governments and career progress avenues to local executives if they show impressive development in the cities.

How do we fix the problem of monstrously bad city governments in India? Genuine city governance reforms are a must. Almost all cities of the world have mayors who hold actual powers to tax, police and manage development projects. Indian cities also need local executives (e.g., mayors) who wield more powers—creating a third tier of recognisable governments, accountable for the running of their city. Such executive power should not be held by bureaucrats who get transferred every few years, as is the current system. They have no skin in the game. It is only effective local electoral democracy that can make politicians deliver. We have never had such a decentralised electoral system.

Such a devolved system of government is unlikely to come to fruition soon because of two reasons. Firstly, creating a new layer of power structure is a political quagmire. Will the Chief Ministers like to cede their power over their resourceful cities to some other mayor? It will create a rival power centre in the state. Similarly, will existing bureaucracy support such decentralisation given that elected city governments will erode power away from them? Due to such misaligned incentives, we rarely hear about city governance reforms. The call for it must come from the grassroots.

The second factor that limits city governance reforms is the genuine concern that decentralised governments without a disciplined bureaucratic backbone will be unwilling to defend the basic principles of the constitution, such as rights to local minority and marginalised groups. This was one of the reasons why BR Ambedkar was sceptical of Mahatma Gandhi’s dream of designing India as a decentralised village republic. These concerns are genuine, which is why cities or urban clusters may be the appropriate unit for devolution. They are large enough to represent a diversity of voices at once while also having a supporting bureaucratic backbone to ensure adherence to constitutional values.

However, as long as these city governance reforms don’t come to fruition, the only alternatives citizens have are data and transparency, and possibly public litigations forcing governments to become responsible for that dangerous pothole in the middle of a highway and that manhole in the footpath. We need a nationwide and publicly crowdsourced dashboard, which provides a live status check of basic amenities like roads, water, electricity, pollution throughout the country. It must also provide the contact details of officials who are at least nominally responsible for maintaining these utilities. Empowered with such data, citizens will slowly wake up to their rights and demand action, if not from the government then from the judiciary. Ideally, the media should do these jobs. But as long as they focus on entertainment and sensationalism over the news, citizens themselves must take charge.

Transparency, participation, and accountability are the three pillars of good city governments. If we want better roads, drains, water, and air in India, we must work on all three.

(The author teaches Strategy at the Indian Institute of Management Bangalore.)

Tweets by @forbesindia
The rise of Psychedelic retreats
He knows the best-kept secret in sports. No, he won't tell.