By constantly meeting targets, Laksh Vaaman Sehgal has proved his mettle. Now, as head of Motherson Innovations, he is using the learnings from his billionaire father to take the group forward 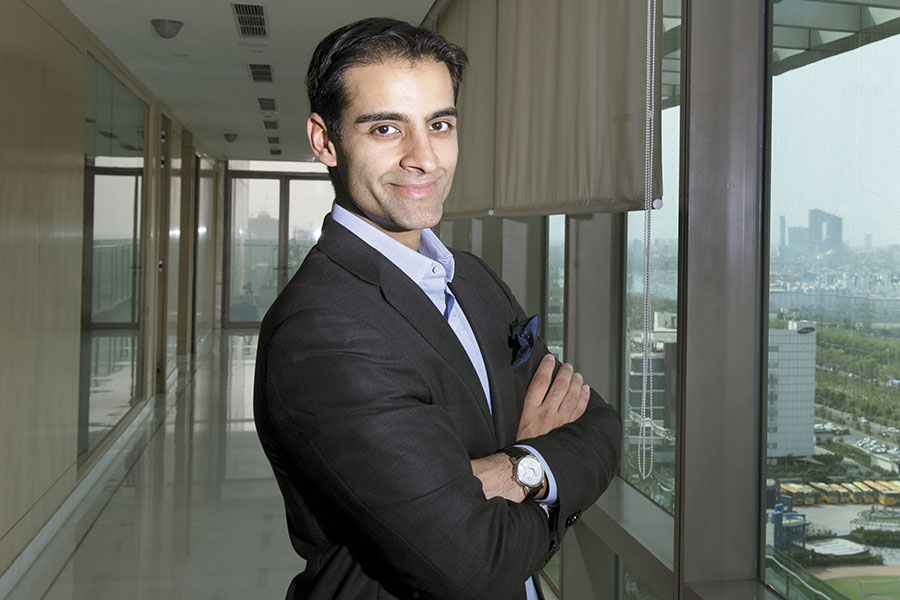 Laksh Vaaman Sehgal says he follows some time-tested formulae that he has learnt from his father
Image: Amit Verma

If your father counts among India’s richest men and is an entrepreneur who has built India’s largest auto component maker, it is not easy to step out of his shadow. But Laksh Vaaman Sehgal, 35, son of Vivek Chaand Sehgal, has done that and more. Right from his first venture as a leader, when he turned around an ailing UK-based company.

Based mostly in London, Laksh —who is a director on the board of the family firm Motherson Sumi Systems Ltd (MSSL)—oversees the business of group subsidiary Samvardhana Motherson Automotive Systems Group. He also spearheads research and development initiatives at Motherson Innovations, a company involved in innovative and technological solutions for the entire group.

But to understand Laksh—and indeed the mind of his billionaire father—one must turn back to 2009 when Laksh had joined the family business on his return to India after completing his master’s in finance from Columbia University. He had earlier, in 2003, trained at MSSL’s partner firm Woco Group, which makes rubber components, at Bad Soden in Germany, and then in 2004, in Thailand on the shop floor.

The company had just acquired ailing UK-based firm Visiocorp, which made rear-view mirrors for cars, in March 2009, and the top brass of Samvardhana Motherson Group (SMG) had gathered in June at the Noida headquarters for a strategy review meeting to discuss how to revive the fortunes of the firm, now renamed Samvardhana Motherson Reflectec (SMR). SMR’s business forms part of SMG.

The UK-based company’s losses were so sharp that they had pushed the flagship MSSL into a loss for the June-end quarter. SMR had posted a loss of ₹22.3 crore in the quarter ended June 2009, which plunged MSSL into a loss of ₹12.88 crore (before considering minority interests) in that period. Even in the subsequent quarter, SMR reported a standalone loss of ₹24.3 crore.

The total capital invested in SMR at the time of acquisition was €30 million; MSSL held a 51 percent stake in SMR while a group firm, Samvardhana Motherson Finance Limited, held the balance.

At the review meeting, Vivek Chaand Sehgal, the chairman and group co-founder, suddenly turned to his son and said: “You will be the new CEO of the [ailing] company.” Laksh was just 26 then.

When he pointed towards me, I actually looked back to see if someone was standing behind me,” Laksh recalled while speaking to Forbes India after the FY17 financial results of MSSL were announced in May 2017. After the meeting, his father had joked with Laksh that SMR was in such a bad shape that it couldn’t do any worse. “It was like a motivational speech for me; that was a good way to take the pressure off me,” says Laksh.

Laksh believes in: “Topline is vanity. Bottomline is sanity. Cash in bank is reality.”

Sehgal senior, being a self-made entrepreneur, has always been an advocate for learning business and leadership skills on the factory floor than in a classroom. Making Laksh responsible for turning around a sick company at a time when the global automobile industry was facing one of its worst crises in decades due to slowing demand was his way of training his son: A true baptism by fire.

SMR did not fare any worse and, in fact, in less than a year, Laksh had managed to turn around its fortunes and navigate MSSL’s financials into positive territory. For the quarter ended December 2009, MSSL reported a profit of ₹78.05 crore and SMR reported a small but significant standalone profit of ₹9.16 crore.

Laksh says he followed some time-tested formulae that he had learnt from his father. He first broke the business down into units, so that each manufacturing unit operated like a separate company and found its own strategy to becoming profitable. This technique helped them keep a close watch on costs and processes (SMR had 16 plants and a majority of them were loss-making).

He also brought in a lot of financial discipline. Laksh repeats the mantra the company believes in and follows: “Topline is vanity. Bottomline is sanity. Cash in bank is reality,” something that has also helped the firm choose its acquisitions well.

The $9.1-billion Samvardhana Motherson Group has made 19 acquisitions since 2002 and in all of them, it has created synergies but allowed them to manage themselves as autonomously as possible. It has 230 factories across 37 countries and MSSL’s auto components are found in cars manufactured by some of the automotive world’s biggest brands like Peugeot, Ford, Volkswagen, Audi, Porsche, Toyota and Honda.

Listening to their customers, adopting financial prudence and the drive to achieve aggressive five-year targets have all brought the group, and its promoter, to where they are today.

Vivek Chaand Sehgal, India’s 23rd richest man according to the 2017 Forbes India Rich List, with a net worth of $5.85 billion, had formed the group with his mother (hence the initial name Motherson) in 1975. It was then a silver trading firm, which they shut down. The capital was used to set up a company that manufactured wiring for houses and telephones. The fortunes of the company changed when Sehgal senior met Maruti Suzuki officials in 1983 and signed a JV with Japanese firm Sumitomo Electric in 1986 to make wiring harnesses for Maruti Suzuki.

Both father and son travel over 250 days a year, meeting officials and staff at the various factories and companies they have acquired, as well as their customers. Laksh, who stepped out of SMR in 2013, is now more focussed on building solutions for the future.

He heads Motherson Innovations, which works on projects involving surface, lighting, and new interior lighting technologies, all of which can be built into the next generation of cars. He is also working on a project—with 14 experts in the group across the US, UK and Germany, internally called ‘Dashboard X’—which will explore unique designs and technologies in building the dashboards of the future. Some of these products are likely to be showcased at the CES (Consumer Electronics Show) in Las Vegas in January 2018.

Laksh could not be in a better space today. The innovation space appears to be getting only more exciting and with the buzz of electric vehicles getting louder, more wiring components would mean an increase in MSSL’s “content-per-vehicle”.

Prior to working full-time at Motherson, Laksh had also worn an investor’s hat in his personal capacity (the Sehgal family too makes investments in companies through the Sehgal Family Venture Fund). In 2006, he had helped a close friend, Paramdeep Singh, set up music streaming platform Saavn (in its earliest form) by seed funding it during his undergrad years. Laksh is still one of the largest independent shareholders outside of the founders of Saavn.

Having been in the family business for over nine years, Laksh seems to have internalised the company philosophy. Though his role now is to guide the group towards understanding and integrating technologies of the future into the group, he is also clear that the policies that have worked to make Motherson Sumi what it is cannot and will not be compromised on, as their business practices evolve. Relationships are important at the group and even as most promoters eye both acquisitions and exits, their mantra on this, as Laksh points out, is clear: “We are a family company, we do not sell companies. We only buy them.”

Tweets by @forbesindia
Boosting your creativity with negative emotions: The case of self-conscious emotions
India is a fertile environment for impact investing: Bill McGlashan