From malls to hotels, office parks to departmental stores, and more, the Rahejas have shown they have a keen sense of what makes real estate work, and that it helps to have extremely long-term orientation 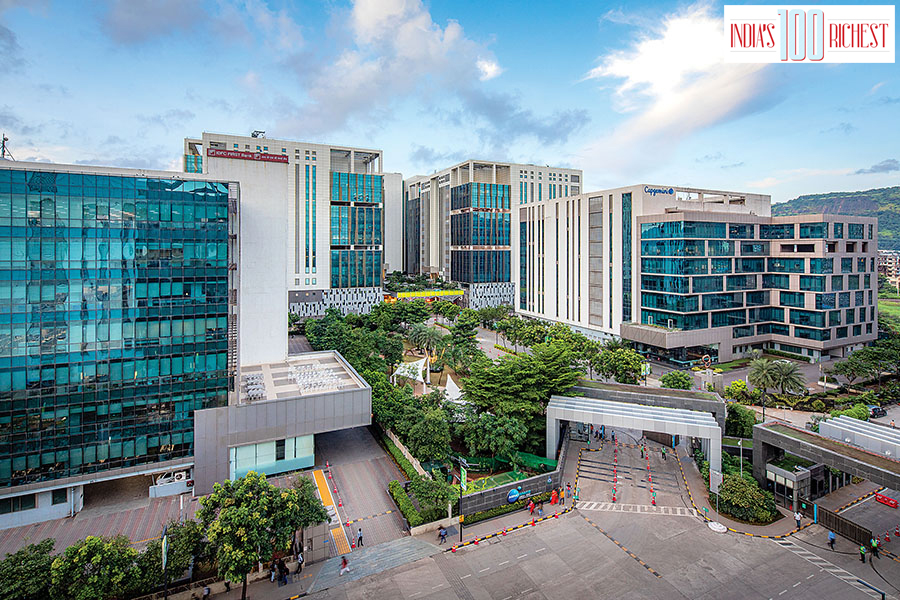 Venu Nair, who runs Shoppers Stop, has the third Tuesday of every month blocked on his calendar. The Raheja family, which set up India’s first departmental store in 1991, conducts a monthly review, agrees on action points and then mostly leaves the management team on their own to execute.

It’s not just Shoppers Stop. A similar template is followed at the other businesses at K Raheja Corp. The Chandru Raheja-led group is present across a variety of real estate businesses—from departmental stores, office parks and hotels to residential real estate. Its steady rise through the last three decades has catapulted the real estate billionaire to rank 46 on the 2022 Forbes India Rich List with a net worth of $4 billion.

Sons Ravi and Neel are the next generation stewards taking the legacy forward. A rival who has known them for a while says they are not too comfortable with their wealth to do nothing, but they are not so aggressive that there is a risk of a blow-up on account of excessive risk-taking or leverage.

Through the years, the group has shown that it has a keen sense of what makes real estate work. It is present across a swathe of real estate businesses and except for residential real estate, the rest are operating businesses where they are responsible for the long-term health of the companies. The group has three listed entities—Mindspace REIT, Shoppers Stop and Chalet Hotels—that are valued by the public markets at ₹37,000 crore. And there are the unlisted residential as well as malls businesses. Promoter stakes in each of the listed entities are above 65 percent.

“Ravi and Neel have the reputation of top-notch fund managers,” says Ashish Jakhanwala, who runs SAMHI Hotels that competes with the Rahejas’ Chalet Hotels. He’s seen them over the years build a hotel chain that is well-positioned for the revival in room occupancies. 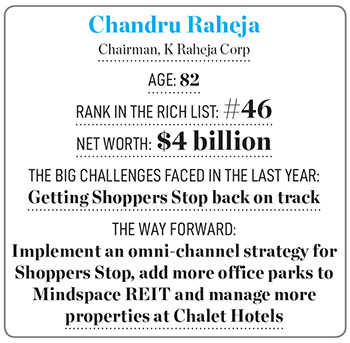 How have the father-sons trio built up such a vast portfolio over the years? First, they’ve shown it helps to have an extremely long-term orientation. Vinod Rohira, chief executive of Mindspace REIT, narrates a story from 2005. On a visit to Bengaluru, Raheja took a detour to Hyderabad before returning to Mumbai. There he was presented with a barren piece of land strewn with boulders. Madhapur, now a sprawling suburb there, went on to become among the top office park clusters in the country with companies ranging from Google, Microsoft and Tech Mahindra to TCS.

Today, Mindspace Madhapur offers tenants 11.5 million sq ft of office space. Mindspace REIT, valued at ₹21,000 crore, has an average rental yield of ₹61 per sq ft per month. The company has also been built with a fair amount of financial discipline. “Part of the reason why Mindspace has the highest valuation among the listed REITs is because its debt is the lowest,” says Manish Agrawal, vice president at JM Financial Institutional Securities Ltd. “The interest outgo is minimal leaving aside nearly 90 percent of the REIT distributions in the form of dividend.” They also have a portfolio of under-development properties that can be brought into the REIT.

While a long-term orientation is critical, the Rahejas have also shown that businesses need patient capital. Case in point: Shoppers Stop. The store has gone through a series of ups and down over the last three decades, but the group has persisted with the business. It now wants to morph the company into an omni-channel play and have recently spun off the beauty business. This is a relatively higher margin business with a long runway. This is something the market has taken note of. After stagnating for a decade, the stock has doubled in the last year, taking Shoppers Stop’s market cap to ₹8,500 crore.

The manner in which the Shoppers Stop board operates provides a peek into how the brothers think of independence, capital allocation and strategy. First, no one from the family is the chairperson of any company. It is the board that is responsible for setting strategy, reviewing strategy, capital allocation and, in Shoppers’ case, signing off on capex decisions in excess of ₹5 crore.

Another point investors note is the lack of large block deals or inter-se transfers between promoter entities in their listed companies. This leads to lower volatility in their stock prices.

Lastly, there’s the need to defer to management teams when they come up with a plan to boost business. Chalet Hotels runs a portfolio in the west and south, but when the management team had the opportunity to bid for a 400-room hotel at Delhi’s airport Terminal 3, they knew they had their work cut out in convincing the board. “When the management proposed, we were able to convince the board,” says Sanjay Sethi, managing director at Chalet Hotels. The company is well-positioned for an upturn in business and MICE travel, and ranks as the third-most valuable hotel company after Indian Hotels and East India Hotels.

For now, the residential and malls businesses remain within the private fold and it’s unclear whether the Rahejas plan to test them in the public market. But as their record in the Forbes India Rich List has shown so far, their wealth has grown steadily with low volatility, rising steadily from $1.8 billion in 2013. That’s a good recipe for the decade ahead.

Tweets by @forbesindia
How Ravi Modi built the Manyavar empire
Photo of the day: The desi experience