Tata Communications rallied around the well-being of its employees, fostering a sense of camaraderie during the Covid-19 crisis 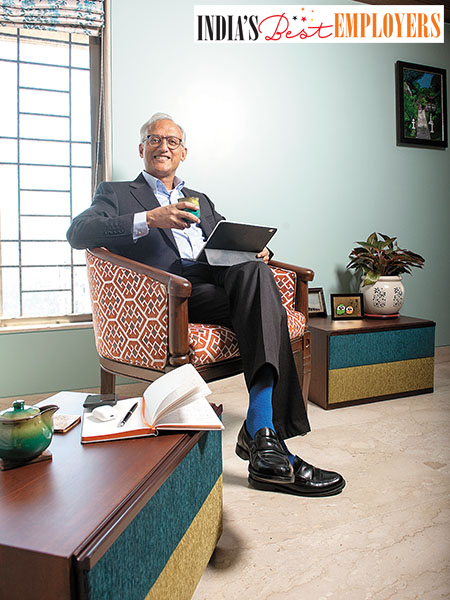 Aadesh Goyal was pleasantly surprised to see beaming faces and an array of vibrant colours on his laptop screen during one of the initial days of the pandemic. An internal team at Tata Communications had organised a contest where staffers had to dress up as superheroes—the response to that was overwhelming. “It was surprising that they had those accessories and costumes during the lockdown when the shops were closed,” says Goyal, the chief human resources officer (CHRO). “Our emphasis in that period was on conveying that everything was fine and that we can still have fun.”

The coronavirus pandemic came as a bolt from the blue last year with fears of downsizing and salary cuts looming large among employees. In such times, Tata Communications took a series of measures to assuage those worries and ensure the well-being of its staffers as people began working from home, while keeping its business continuity plans in place.

Amur S Lakshminarayanan, the MD and CEO, was blown away at the manner in which the workforce adapted to a daunting environment. Though the company had put its employees’ health as top priority, and monitored that with a cross-functional team, the feeling of oneness displayed during the crisis left him impressed. “It was more about coming together, showing resilience and demonstrating what we were capable of.  There were a lot of positives to take away from this than the fears,” he says.

Goyal believes employee engagement is not a series of small, opportunistic steps that one takes. “It’s a long-term strategy that you put in place. When you implement it well, it starts to produce results,” he says. And the telecommunications services company with over 12,000 full-time employees can claim to have succeeded on that front as it is among India’s Best Employers, yet again.

One of the biggest challenges for Tata Communications was ensuring a seamless work from home experience. “Pre-pandemic, only about two percent of our workforce used to work from home; in two weeks since the lockdown was announced, that number shot up to 98 percent,” explains Goyal. In office, people worked in shifts and shared machines. So, the organisation requested people to use their personal computers (PC) till the company arranged for devices at their homes. That meant ensuring the IT security policy was robust and not compromised. “It was a huge task to procure PCs during the lockdown as warehouses were locked and shipping was an issue too,” adds Goyal.

Employee morale also had to be taken care of. Lakshminarayanan says they organised numerous well-being programmes, including yoga and meditation sessions, for the staffers. That apart, managers would regularly meet their team members in small groups to address their concerns and company emails gave them frequent updates on the way forward during the pandemic. Those who had to visit office and the field force were given special considerations to make sure they were safe. Fun activities like ‘#VirtualWorks’ where teams played tambola, had karaoke sessions and organised quizzes were a happy distraction from the pandemic.

“A combination of these measures and the spirt of our employees not only helped us get past the situation but also do exceedingly well in stressful times,” says Lakshminarayanan. “If the employee engagement is good, taking care of the morale is somewhat easier.” 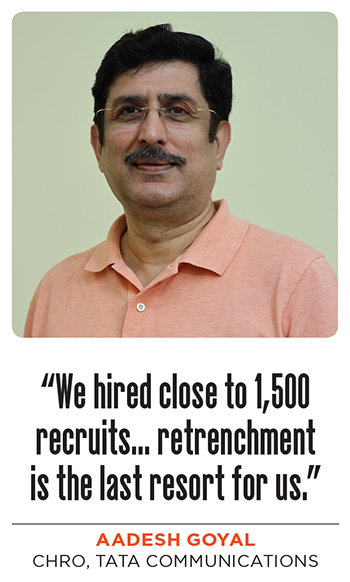 Both the CEO and CHRO claim that a dipstick employee satisfaction survey conducted by Tata Communications last May showed an improvement of 10 percent. This was a result of initiatives like the SKY Happiness Programme—about exercising, healthy living, eating nutritious food and sleeping habits. Besides, there’s a Global Employee Assistance Programme done through a third-party where staffers can get professional counselling in case they are stressed or have mental health issues.

Kamal Karanth, co-founder of specialist staffing company Xpheno, believes Tata Communications’ financial statements are a testimony to its seriousness about employee welfare. “It’s a unique balance sheet. Thanks to Covid-related cost benefits, which reflect on its Ebitda growth, it has increased the deployment of cash to employee benefit expenses. It is a rare thing to do, especially during Covid quarters,” he says. “Any company that is financially healthy is likely to have a positive impact on how it treats its employees.”

That apart, the company has quelled any doubts there may have been about job losses. “During the pandemic itself, we hired close to 1,500 recruits,” claims Goyal. And he emphasises that the plan is to increase the headcount in the coming fiscal. “We hire for the long term… retrenchment is the last resort for us.”

Karanth points out that since communications became an essential service during the lockdown, Tata Communications was positively impacted by the situation. As a result, employees were skilfully engaged. “Many companies were struggling with work and had layoffs. It is a sign of a healthy company when you are recruiting people… it’s a big positive, more so during Covid,” he says.

From a business standpoint, explains Lakshminarayanan, there were a few tailwinds and some major headwinds. He says customers and major corporations relied on Tata Communications during the pandemic. “We not only had to move quickly to help ourselves, but also our customers. The team showed great collaboration to address market needs.” Concurs Goyal. “When there is a crisis, teams come together. And they drop their individuality. We saw a lot of that last year. None of this would have been possible had all our employees globally not been able to quickly, flexibly adapt to the new way of working,” he says.

(This story appears in the 26 March, 2021 issue of Forbes India. You can buy our tablet version from Magzter.com. To visit our Archives, click here.)

Tweets by @forbes_india
Simplicity and personalisation: What customers expect from brands in 2021
Handa's new Funda: From Academy to Unacademy