How IITian Ravi Handa scaled up his seven-year-old online venture for MBA preparation, and eventually sold it to an edtech major 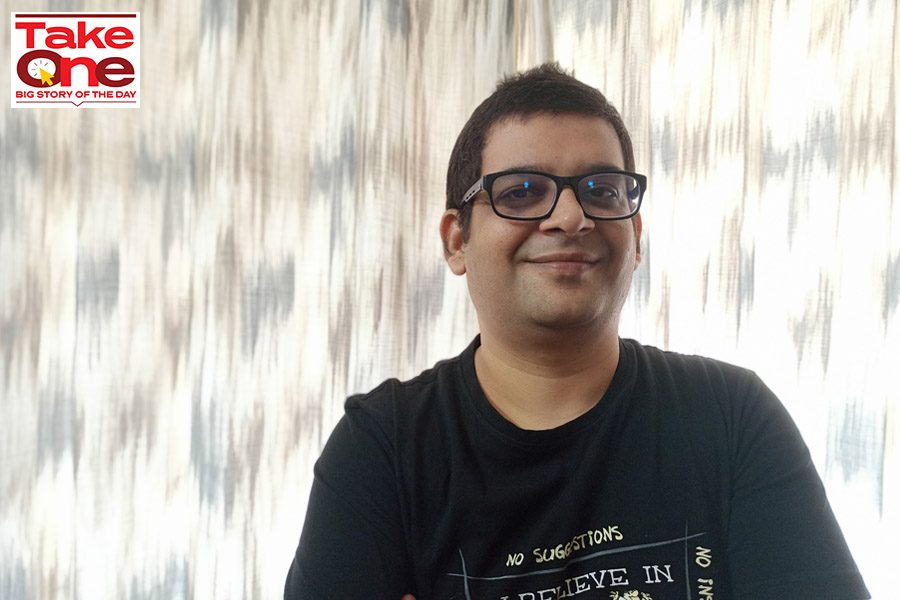 The first thing that strikes you about Ravi Handa is his brutal honesty. A teacher, after all, needs to be upfront. The IITian starts the conversation by making two candid confessions. First, he reveals his weak spot: Computer science. “I was bad at it, and I mean really bad,” smiles the 37-year-old edtech founder of online CAT (common admission test) and MBA coaching venture Handa ka Funda. An IIT-Kharagpur alumnus, Handa has dual degree (BTech and MTech) in computer science and engineering. Earlier this week, Handa ka Funda was acquired by edtech major Unacademy for an undisclosed amount.

Unlike a fellow IITian—or any other from Handa’s alma mater—who would have traded the prized-engineering tag by joining some fancy multinational company and settling for a hefty pay pack, Handa was the odd one out. Reason: He knew his limitations. “I did not try apart from the campus placement,” he concedes. Poor computer science, he underlines, would have been a major handicap. “Even if I could get a job because of the IIT brand, I was sure I would get fired once they realised I was Jon Snow,” he laughs, alluding to the fictional character in a Game of Thrones. The second confession is what changed his life: Love for math. He settled for a career in coaching. In short, teaching math. “I loved the subject. I never felt that I was working while teaching math,” he says. Apart from his love for the subject, there was one more overwhelming personality trait that kept him glued to coaching: Laziness. “I am a really lazy person and I liked the idea that it (teaching) wasn't hard work,” he says, explaining why he got hooked to coaching. “It’s a pretty comfortable job to stand in front of a bunch of 40 to 50 graduates, and explain basic math to them, something they already know, but have forgotten,” he smiles.

Handa’s tryst with coaching started quite early as a student when he took a break for a year after he finished his school and went to Kota—the Mecca of IIT coaching. His relationship with the subject continued during his IIT-Kharagpur days when he would rush to Kolkata—some 135 km from his campus—to take part-time classes at a coaching institute. The money was peanuts. But what fuelled the young engineering undergrad was the passion for the subject. After finishing engineering, he started teaching full time. “In 2006, I started with a salary of Rs22,500 per month,” he recounts. The amount, he stresses, was lower than the job offer that he got at a campus placement. “I do not think any IITian, or any top engineering or B-school grad gets into coaching for money,” he reckons. The reason is only one: Passion. What also helped to opt for coaching was zero pressure from his parents. “Both are doctors, and they gave me enough space and freedom to choose whatever I wanted to pursue since I was a kid,” he says. “There was no financial pressure on me. I was lucky to pursue what I wanted to do.” 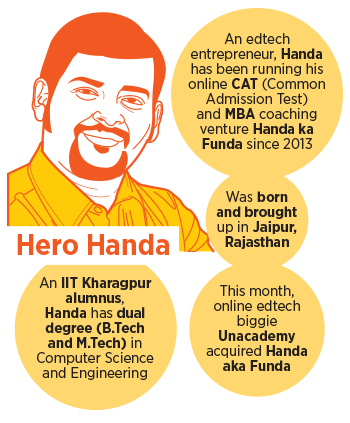 Early in his career, too, lady luck smiled on Handa, who started working for some coaching institutes in Kolkata, then shifted to Jaipur, co-founded a learning company in 2010 after which he worked at sales readiness technology firm MindTickle, and finally started his own website—Handa ka Funda—in January 2013. The easy part for Handa was quitting the job once he realised that he is not cut out for it. “Coaching was my calling,” he says. The difficult part, though, was convincing students to opt for an online medium of education. Most of the MBA and CAT coaching was offline in the country; teaching academies used to have brick-and-mortar branches; and students were used to studying from physical reading materials and books. The first year of operations, therefore, showed little results. Only 200-odd students joined the institute. Handa, though, remained undeterred. Reason: He was still not looking at coaching as a profession. “I just asked one question: Can it pay my bills? And surely, it could,” he recalls. Over the next few months and years, what started as a trickle was fast turning into a steady stream. Word-of-mouth worked; being actively present on question-and-answer website Quora helped immensely; and willingness to help students by offering some free content during the initial days added to his popularity. By the end of the last year, Handa Ka Funda had some 4,000 students. So, if the going was great, what was the reason to sell out to Unacademy in March? The reason again, Handa underlines, is not money. The biggest pull, he points out, is the freedom offered by the much bigger rival to do something that Handa had not been able to do over the last few years: Focus solely on teaching. Managing an institute takes a toll on the teacher. “Now my key responsibility would be only to teach and not to think about running the establishment,” he says. The transition from employer to employee, too, has some handsome perks: No pressure of revenue target, no headache of managing the show and being worried about umpteen trivial things. Unacademy’s pitch to teachers who are founders is a simple message: You know how to teach. So please stick to teaching, and let us take care of the other things. “It’s a big load off my chest,” he says. The acquisition talks, he adds, started in the middle of January. 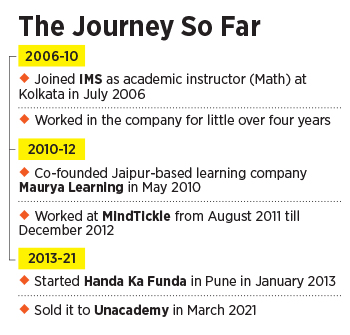 The edtech boom in India over the last few years has brought about a paradigm shift in the teaching landscape: Both as a full-time profession, and the money involved. Handa explains. “Now for a lot of people, teaching is not an experiment,” he says. “It’s a very good way to earn a handsome living.” What the edtech revolution has also done, Handa points out, is to nudge all the part-timers to turn full-timers. Are listening to his heart and following his passion the secret sauce to his success? Handa pauses for a while before saying, “To be honest, I just happened to be the right person at the right time.” Too many variables fell into the right place. “I was just lucky,” he insists, explaining how his strong dislike for computer science made him realise his love for math. “It’s like Pepsi versus Coke,” he says. If one opts for Pepsi, it might not just be that he loves the brand. “It could also be that he hates Coke and there is no other option available,” he says. “I disliked engineering, I disliked computer science, that’s why the secret love with math blossomed,” he says. As a kid in school, he recalls, he would end up solving tough problems in math that the others would struggle for days. And what made him more addicted to the subject was the compliment that would be lavishly heaped on him by his friends: Arey wah (wow!). Two decades after finishing his school, Handa has still managed to get compliments. The trigger this time is to sell out to Unacademy, and the exclamation is ‘Arey wah.”