The Talwalkars have led from the front in encouraging people to stay in shape. In the process, they have built their own financial muscle too 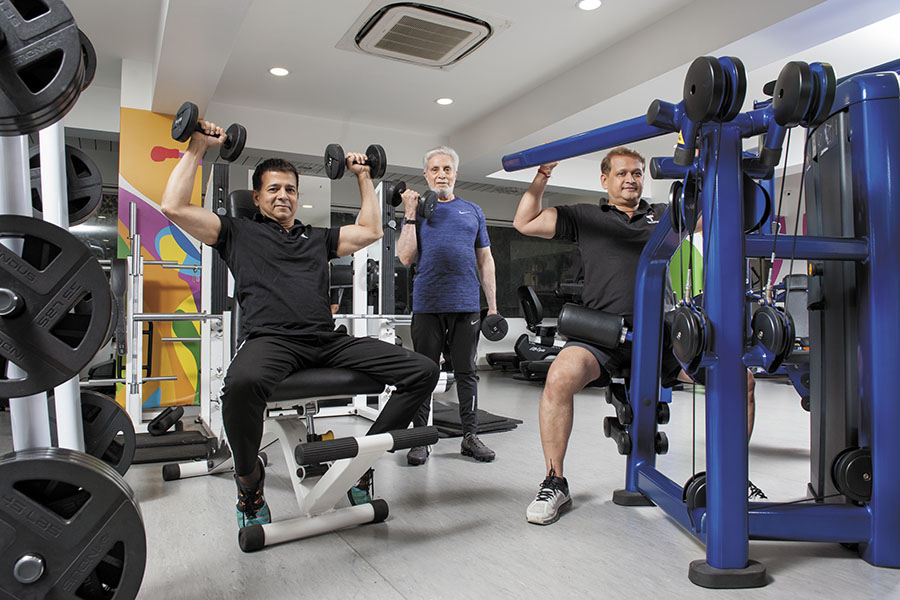 "If you take my blood test, you will see dumbbells and plates,” jokes Prashant Talwalkar, 55, managing director and CEO of Talwalkars Better Value Fitness Limited.

The third-generation member of the Talwalkar family—whose name has been synonymous with fitness in India since the 1930s—is comfortable with the weight and expectations of running a ₹286-crore (by revenue in FY17) business along with his paternal uncle Madhukar Talwalkar, 84, and cousin Girish, 56.

Mumbai-based Talwalkars today has 220-odd gyms in 80-plus cities in the country and claims to have close to 2 lakh members. Its financial muscle has only grown stronger (See ‘In Good Shape’) over the years, helping it scale its business overseas too. Last year, it opened 17 gymnasiums in Sri Lanka in partnership with Power World Gyms and, having acquired a master franchisee of Snap Fitness in Singapore, it plans to foray into the Southeast Asian country as well.

The foundations of the 86-year-old business were built by Madhukar’s father, Vishnu Talwalkar, who set up the first gym, Ramkrishna Physical Culture Institute, at Linking Road in Khar, Mumbai, in 1932. “It was a small gym and members were charged 2 to 4 annas [an anna was 1/16th of a rupee] as fee,” recalls Madhukar. 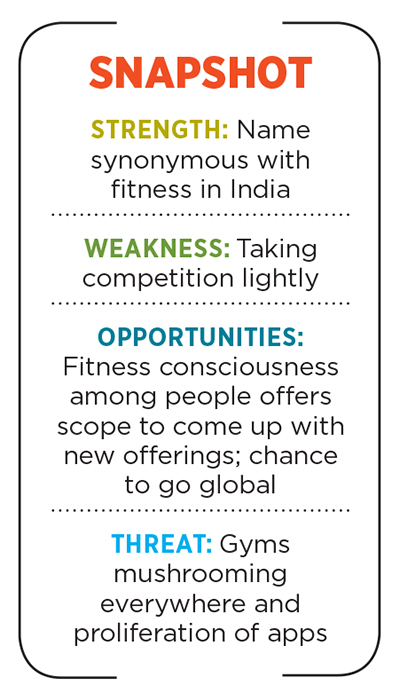 A wrestler from Ashta village in Sangli, Maharashtra, Vishnu had moved to Mumbai in 1928 at the age of 22 and worked as a physical trainer at Girgaum’s Hindu Sarvajanik Vyayamshaala (gymnasium) in his spare time. “It was more like an akhara [wrestling pit] where the uneducated and unemployed flocked. Slowly, even the educated class or whom we called ‘freestylers’—people who had career aspirations and wanted to build a good body to stand out—also came in,” says Madhukar. He adds that his father built a reputation of sorts by winning wrestling competitions held at Girgaum Chowpatty on weekends. Goaded by his associates and friends, Vishnu then set up his own gym.

At a time when even women characters on stage were enacted by men, Vishnu encouraged his members to get women to his gym. “That is what made our gyms family gyms. They are serious fitness centres,” says Prashant, who joined the business in 1982. The outlet at Khar subsequently shut down, but Vishnu’s love for fitness saw him go home to home, teaching those who sought his help. “It’s what you call personal training today,” says Prashant. Later, the Talwalkars set up a gym at Charni Road in South Mumbai in 1951.

Girish, who is chairman of the company and got involved with the business in 1985, attributes their ever-expanding presence in the city since the 1960s to the success and goodwill the Talwalkars have earned. “These gyms were all over Mumbai and almost someone or the other from some family has been to a Talwalkars gym. That collective memory is what makes it special,” he says.

The real growth, however, says Prashant, began when they went out of Maharashtra and set up their first gym in Hyderabad in 2005. The Talwalkars inaugurated a plush 4,200 sq ft facility at Banjara Hills, having leased the place for a rent of ₹29 per sq ft. Hundred and fifty people enrolled on the first day. “I had to close admission in the third week for five days to ensure that our existing members get good service,” Prashant says. 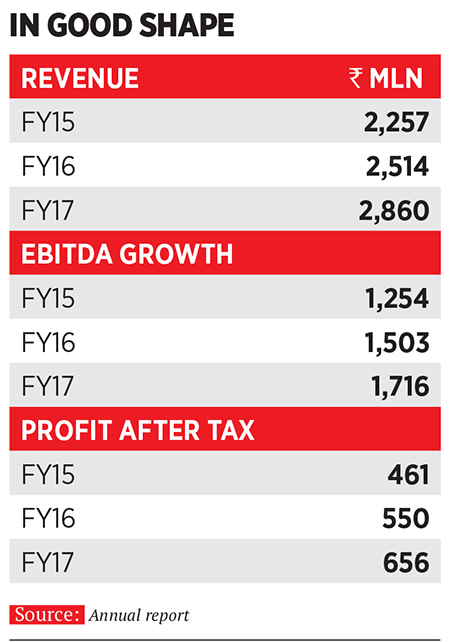 Such vast spaces that the Talwalkars were dealing with were a far cry from the modest homes they lived in at Girgaum. Today, with the joint family structure giving way to nuclear families, the Talwalkars too live separately—Madhukar and his son Girish in Juhu, and Prashant in Bandra—but their partnership remains as formidable as ever.

“We are a close-knit family and we meet regularly on all occasions. The expansion in the number of gyms is also possible because of our togetherness,” says Prashant, who holds a bachelor’s degree in science. Girish concurs, saying in a way this model also suited a family business to which Madhukar gave it his all.

Madhukar, a textiles engineer, remembers going to supervise a family gym in Dadar as a schoolboy. It would open at 5 am and a dreary-eyed Madhukar would sit patiently on a stool till it closed at 8.30 am. He would later quit his job at Khatau Mills that paid him ₹312 a month to oversee the business. Fitness is now a religion for him. Even today, the octogenarian does weight training at home every day. “Talwalkars became a success story because of the unity in our family. And credit for that goes to the passion of my father and his brother Wasudeo. Besides, our culture and philosophy are such that we keep our promises made to our members,” says Madhukar, who is a director at the company.

One of the biggest decisions taken by the family was to take Talwalkars Better Value Fitness public in 2010. “Sometimes growth in the mind is good, but it’s important in the pocket too. Growth was the main reason for getting listed,” explains Prashant. At present, its promoter group comprising Madhukar, Girish, Prashant, Vinayak Gawande, Anant Gawande and Harsha Bhatkal hold a 42.13 percent stake in the company. Anchor investor Shivanand Mankekar had made the first significant investment of ₹3.5 crore in 2006.

The influx of investors and funds since the IPO is helping Talwalkars pursue its goals. For instance, work on building a sports club is on in full swing in Pune. “It is spread across 70,000 to 80,000 sq ft and will have a swimming pool, tennis and squash courts, restaurants,” says Prashant, adding that it’s one of many in the pipeline.

Talwalkars also introduced Zorba, a year-and-a-half ago for yoga practitioners. It brought the concept of NuForm, a 20-minute workout that needs to be done just once a week to achieve peak fitness, using electro muscle stimulation technology. And it has Reduce—nutritious snacks that can be carried, warmed and eaten anywhere.

The fitness revolution in the country resulted in several local gyms mushrooming across India in the last two decades. It also brought foreign chains like Gold’s Gym to India in 2002. This was further fuelled by Bollywood stars flaunting their chiselled physiques on screen. Both Prashant and Girish admit that the film industry played a pivotal role in their success. “Every time, Salman [Khan] or Shah Rukh [Khan] remove their shirts [on screen], there’s a burgeoning crowd in the gym for at least three days,” says Prashant.

Talwalkars has managed to keep competition at bay so far. “There was competition, but it’s reduced in the past two years. One of the reasons is that they [competition] have misunderstood the business. When you open a gym, you need to involve yourself. There’s a big gap in me running the show and someone else doing that,” says Prashant. Girish, however, offers a more pragmatic view. “Competition is still stiff; it is from a small gym in the corner to a trainer who teaches exercises at home and even someone who buys equipment to workout at his residence,” he says.

There is also a proliferation of fitness apps that people are warming up to, but the Talwalkars don’t see them as a substitute to working out in a gymnasium. “There is no definitive model; something will happen someday but there’s nothing concrete as yet,” says Girish, who has a bachelor’s degree in physiotherapy.

Apart from their outlets under Talwalkars Better Value Fitness, which was formed in 2003 (prior to that it was Talwalkars Gymnasium), there are around 10 legacy gyms in places like Mahim and Wadala that are managed by Prashant’s father Sudhakar and others.

“The Talwalkars are the godfathers of the fitness industry in India. Theirs is a nice, healthy and well-regulated company,” says holistic guru and corporate life coach Mickey Mehta, whose 360 Degree Wellness Temple has got into a partnership with Talwalkars to come up with ayurveda health products.

The challenges of running a family business cannot be ignored, but Madhukar claims they didn’t face any. Prashant says, “We have been strong whenever we have been together. If we want to grow further, we will continue like this.”

Growth is a word that has the Talwalkars excited. All three of them keep themselves abreast with the developments at their centres. “The fitness industry cannot run on remote control. None of us sits at home and runs the gym,” says Prashant. “I want to grow big. From the growth point of view, I will not stop.”