Ritesh Jain: Gold is an Excellent Hedge Against Inflation

The Indian currency will remain under pressure against currencies of the developed world, supporting the price of gold in the local currency 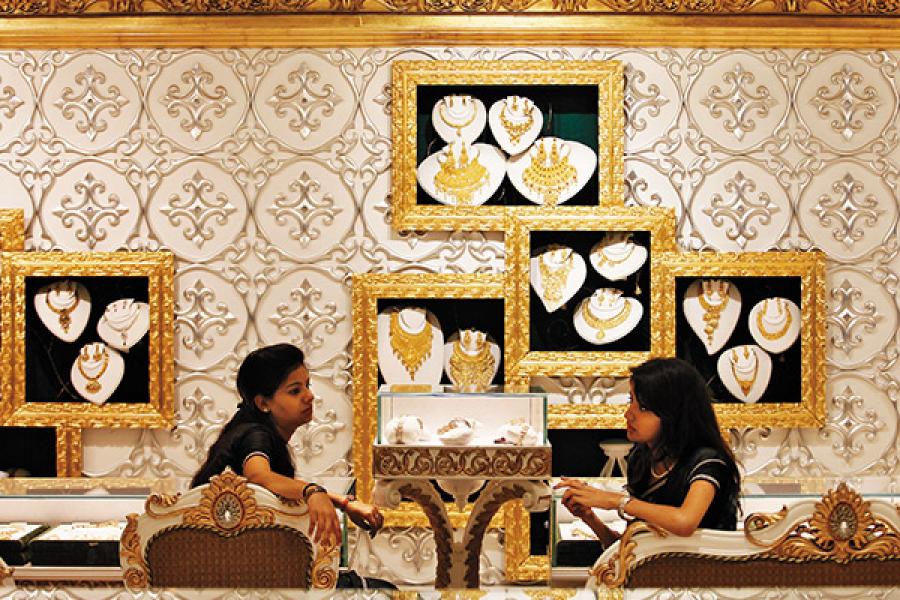 As the dollar value of gold heads for its biggest annual loss in 32 years, investors feel that the shiny metal has lost its sheen. With a loss of 29 percent (year-to-date in USD), it is the most underperforming investment asset of the year. 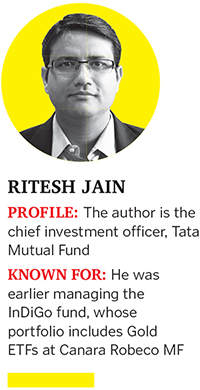 Gold hit a six-month low on December 20 ($1,196) as the US Fed took its first step away from the ultra loose monetary policy.

The Fed said this week that it is scaling back its massive bond buying scheme, winding down an era of easy money that saw gold rally to an all-time high of $1,920.30 an ounce in 2011.

Mirroring the falling appetite for gold globally, gold holdings in SPDR, the world’s largest gold ETF, declined sharply (lowest in the last five years) reflecting the trend of re-allocation out of gold.

Internationally, gold is treated as any other asset category in which investors make allocations for making a profit and also as an inflation hedge. This is evident in the global trend of gold holdings against its price movement.

Gold in India—A Different Story
In terms of Indian rupees, gold did not fare that badly, with prices down 3 percent this year (due to rupee depreciation and higher custom duties) and up more than 100 percent since the financial crisis of 2008.

Decline in global prices, tapering of quantitative easing by the US Fed and restrictions on imports in India led to the recent fall in domestic prices.

Gold & Inflationary Expectations
Gold acts as a great hedge against inflation and has continued to do well in currencies where the central bank is running a policy of negative real rates and making financial savings unattractive, eg in India. The same is not true for gold investors in the developed world, where printing massive amounts of money has not led to increase in inflation.

In fact, the US and Europe are flirting with deflation, making real rates positive. It is hurting gold prices. To elaborate, the US 10-year yield is around 3 percent with forward inflationary expectation running at less than 1 percent, thus making the real interest rate at 2 percent positive. In India, the 10-year yield is around 9 percent and the forward household inflationary expectation is running at 14 percent making real interest rates sharply negative. Gold has fared relatively well where inflation is running ahead of interest rates.

Gold in 2014—Global Outlook
Markets have got hooked to easy money and this easy money has found its way in equity markets. Markets have come to a consensus that tapering is a vote of confidence for the US economy and hence the lure of gold has diminished, pulling down prices to almost $1,180, near its three-year low levels.

A quarterly GDP growth of 4 percent in the US, accompanied by minimal inflation, is more reason for people to abandon gold, which is seen as a hedge against inflation and uncertainty.

US recovery not-withstanding, the unprecedented liquidity infusion by the US Fed seems to be inflating asset prices in the US, including equities; however, the impact of liquidity is not yet evident in inflation in the US. It is yet to be seen how the unwinding of the QE will play out on asset prices and its contribution (if any) to recovery in the US, in terms of investments into productive assets.

The optimism in US recovery is misplaced, and the recovery fragile, as consumers are still overleveraged and the corporates are preferring to do buybacks rather than investing in businesses, making new highs in the US stock market look like a mirage.

With gold trading close to its replacement cost of $1,000-$1,200 (downside protection) and potential for upside in the event of a reality check for US recovery, there is case for allocation to gold. It would be wise to take some profits out of soaring equity markets to make an asset allocation for gold.

Gold in 2014 – Indian Scenario
Indian economy is stuck in stagflation. Any recovery in growth will be accompanied by disproportionate increase in inflation as negative real rates in last five years have brought down the productivity. High M3 growth [M3 classification is the broadest measure of an economy’s supply of money, taking into account money as a store-of-value rather than a medium of exchange] of about 14 percent (to support investments in infrastructure) with real GDP growth between 4.5 and 5.5 percent points to a scenario of continued pressure on inflation.

Given all the above domestic plays, expect the Indian currency to remain under pressure against currencies of the developed market, thus supporting the price of gold in local currency.

Therefore, for the Indian investor, gold will continue to be an excellent hedge against high and sticky inflation.

The author does not manage gold assets at Tata Mutual Fund; his views are personal