Meet Swajal, the startup that's quenching the thirst of the needy 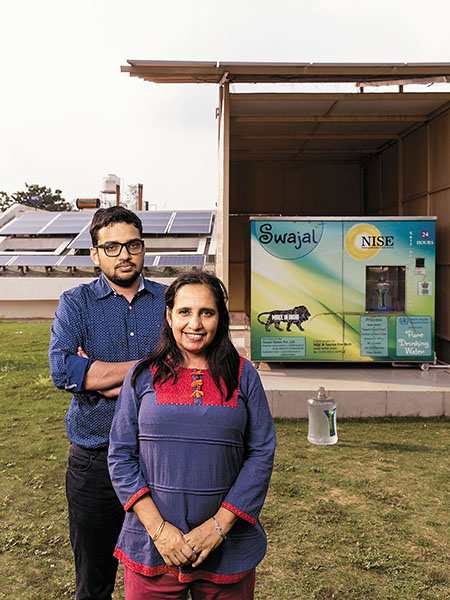 Vibha Tripathi gave up her complacent life to set up Swajal Water. Her son Advait Kumar joined her in 2013
Image: Madhu Kapparath

Even as she was teaching at the Indian Institute of Technology (IIT)-Kanpur, Vibha Tripathi knew that her real calling lay elsewhere. “When I was in academics, I used to keep thinking that I have only one life and I must do more with it,” the 50-year-old mother of two tells Forbes India. “I wanted to take technology to the poor.”

In 2008, Tripathi quit her “calm and complacent life” at one of India’s premier institutes, in pursuit of opportunities in the solar energy sector. “I belong to a small village in Hardoi [Uttar Pradesh],” says Tripathi, a scientist who also helped develop IIT-Kanpur’s expertise in flexible organic solar cells. “I am aware of the frugal life there [in the villages] and the issues they face. I wanted to work in solar because electricity was always a problem.”

That year, she set up Saurya EnerTech, a Gurugram-based company primarily engaged in offering workshops, training and seminars on solar energy to organisations. Back then, solar energy was still in its infancy; today the country has over 23 GW of installed solar capacity. As Saurya EnerTech grew, Tripathi ventured out to distribute solar energy products such as modules, heating solutions and other products. The company also provided consultations and site assessments for solar energy companies in the country.

Yet, Tripathi wanted more. “My work had taken me to the slums and rural areas. We realised that accessibility to clean water was still a major concern,” says Tripathi. “We kept thinking how solar energy can be used to generate clean drinking water.”

As Tripathi’s luck would have it, in 2011, the United Nations Development Programme (UNDP) selected her proposal for a solar energy-based water purifying system that could be installed across the country. The UNDP provided a “small” grant that would help Tripathi and her team research and develop solar energy-based water purification systems. “It took us two years to complete the project,” she says. “We wanted to study the customer... in the process we found interesting data. We found that despite people willing to pay more for purified, clean water, they couldn’t access it.”

By 2013, Tripathi and her team also received a ₹1 crore grant from the bilateral agency Renewable Energy and Energy Efficiency Partnership (REEEP) that would require her to develop a business plan and design the machines. “With that money, we got down to designing. We had already visualised the machines. It took us six months to finish work and we quickly installed the machines in five slums [in Gurugram],” says Tripathi, who was joined by her son Advait Kumar in the same year. By 2014, a year after the REEEP grant, the mother-son duo incubated Swajal Water Pvt Ltd, at Saurya EnerTech.

The company’s eponymous water dispensing machines or ‘water ATMs’ are today installed in 400 locations across the country, making clean drinking water accessible to many. As opposed to standard purification systems that draw energy from the grid or diesel generators, Swajal’s water ATMs run on solar power. “We also use energy from the grid if that is available,” says Kumar, 25. “But solar provides better efficiency and we also use that in areas where power supply is an issue.” Deploying modern technology, the quality of the water dispensed from the ATMs is monitored remotely.

Users can pay the ₹5 per litre that Swajal charges, with prepaid RFID-enabled cards. The company has also introduced QR-code tracked water bottles and remote-sensing water purification systems at its installation point. The machines cost anywhere between ₹3 lakh and ₹20 lakh, depending on the size.

“When we started, it was a novel idea,” says Kumar, the co-founder. “It has become popular and there are many copycats now. But the ‘water ATM’ term we coined is our trademark just like Fevicol [is a trademark of Pidilite Industries].”

To understand the potential of the water ATM, consider the following data. More than 76 million Indians don’t have access to safe drinking water in India and over 140,000 children succumb to diarrhoea caused by unsafe water and poor sanitation each year. The National Sample Survey Organisation reckons that of every 1,000 households, only 858 in rural areas and 896 in urban areas have access to sufficient drinking water. “When we set up one of the units at a slum, a lady who had lost her grandchild to diarrhoea told us that her prayers have been answered,” says Kumar.

“ When we started, it was a novel idea. It has become popular and there are many copycats now.”
Advait Kumar, co-founder, Swajal Water

All this means a real opportunity for Swajal. The company has been rapidly growing its network, even as the water ATM’s design and thought processes have evolved. Many of the purifiers are installed in rural areas, urban slums and public places such as railway stations, pilgrimage centres, schools and hospitals. “We have had instances where not just student attendance went up, but also teacher presence increased because they could take water from school to their homes,” says Kumar.

Much of Swajal’s revenue comes from water sales, particularly from self-installed purifiers or by partnering with government or public sector companies as part of their corporate social responsibility initiatives. “Our revenue comes from government tenders. In other areas, where people are willing to pay, we get money from sales. There is also the annual maintenance contract when we sell [water ATMs],” Kumar tells Forbes India. Then there is the franchise model, where the company identifies a local store where a unit can be set up and maintained. “The share of revenue is 30-50 percent for the franchisee,” says Tripathi.

Swajal employs about 150 people, a number that Tripathi expects to increase to 200 by the end of the year, with operations in about 14 states. Along the way, the company has also raised over $1.2 million from investors.

Important as it is to regions bereft of clean drinking water, the water ATMs are no stand-in for reliable water supply. “In areas where access to water is a concern, these water ATMs have a role to play,” says Puneet Srivastava, manager-policy at WaterAid India, an NGO working to improve access to safe water, sanitation and hygiene. “But they cannot be a substitute for regular water supply, which is needed for bathing and cleaning, for instance. In addition, we need to factor in the distance to a water ATM. In that sense, it doesn’t quite solve the problem. With the government’s stress on piped water supply for all, and people turning to water purification solutions at home, I don’t see how the business is really scalable.”

Its founders, though, still firmly believe in the premise of their company. Swajal has firmed up plans to set up its water ATMs across the 100 smart cities that the government has envisioned. “That is a huge area,” says Tripathi. “We are also looking at roadways and institutions. Institutions where we have installed machines save us a lot of money.”

Others too have taken cognisance of the potential of water ATMs. The Ahmedabad-based Piramal Sarvajal, for instance, is also setting up water kiosks. Kumar is quick to claim that Swajal’s machines are the best of breed. “We manufacture everything from the control panel to the body,” he says. “Others get [equipment] from China or they assemble it. Nobody does everything themselves. We understand our machines and that way we can service faster. We can even communicate with the system through SMS. We have built communication, front-end, back-end everything frugally because costs really matter.”

For Swajal and its needy customers, then, the tap may not run dry.