Show me the earnings

Indian stock markets had, for the last five years, waited for a revival in earnings growth. Now they’ve run out of patience. Post the Budget, which contained no stimulus to revive growth in the near term, investors are unwilling to pay the high multiples that the markets command. Since July 5, the Sensex had fallen by 5.4 percent for the month. Over the past nine months, a narrow band of stocks—TCS, Infosys, Bajaj Finance, HDFC, HDFC Bank, Titan and Reliance Industries—had held up the Sensex. Now, they too are seeing their valuations fall. 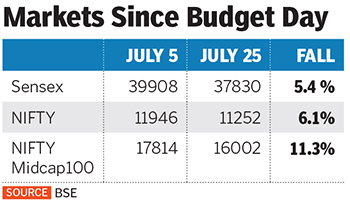 The broad-based sell-off points to a medium term de-rating of the market as growth concerns have spooked investors. Midcap stocks have been hit the most, falling by almost twice as much as large caps. Foreign institutional investors have been net sellers in July. They sold ₹12,520 crore till July 25 after being net buyers from March to June. The Budget also increased taxes on foreign portfolio investors as well as the surcharge on those earning an annual income of ₹2 crore and ₹5 crore. This further depressed sentiment. On July 23, the International Monetary Fund downgraded India’s growth forecast for the year ended March 2020 to 7 percent on account of weaker domestic demand. Private investment demand is particularly weak. At 76 percent, capacity utilisation levels are still low and a fall in domestic savings to 17 percent, according to Kotak Research, means there is limited room for private companies to spend on expanding capacity. In the last month, the controversy around ratings agencies working at the behest of their clients has opened up another risk. On June 28, Cox and Kings, with ₹1,083 crore cash on its books, defaulted on multiple interest payments. Its ratings were revised to default, but the damage had been done. “As more companies get downgraded, banks will have to set aside more capital impacting their profitability,” says Abhimanyu Sofat, head of research at IIFL Securities. So far the Sensex has been trading at a historical high of 19 times March 2020 earnings. To get there, earnings would have to rise by 21 percent this year with corporate banks playing a major role. “The whole thesis of bank profits reviving is now being questioned,” says Sofat. In addition, Sensex earnings are also under pressure due to the ongoing telecom price war. Tata Motors lost ₹3,680 crore in the first quarter of FY20. It remains to be seen how much the growth in earnings from consumer goods and metals companies can offset these disappointments.