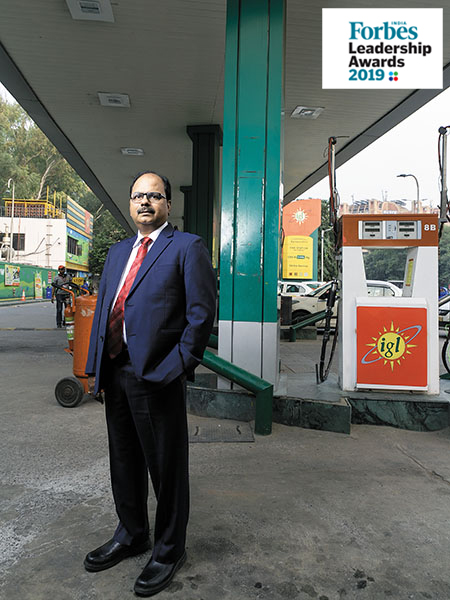 “In Delhi’s Tilak Nagar I can get 20,000 homes and two CNG stations with 25,000 kg of sales. It’ll take 5 years and ₹100 crore to do that in Karnal.”
ES Ranganathan, managing director, Indraprastha Gas
Image: Madhu Kapparath

Late on a Friday afternoon at a compressed natural gas (CNG) filing station in central Delhi’s CGO Complex, cars, light commercial vehicles (LCVs) and three-wheelers make their way to dispensing points along 34 bays. Lines are short and, at an average filling time of 4 minutes, the pump owned and operated by Indraprastha Gas is capable of filling 2,040 vehicles in an hour. An app designed to provide live queue status to customers shows a wait time of 5 minutes.

At least in central Delhi, long queues at CNG pumps are a thing of the past as Indraprastha Gas adds to its network of 515 filling stations at the rate of 50 to 60 outlets a year. In its favour are a mix of government regulations that mandate the use of CNG for public transport and LCVs, falling natural gas prices and a massive planned expansion of India’s natural gas pipelines for use by automobiles, households and industries.

Since 2017, automobiles and households have been moved to the top of the priority list for domestic gas, ahead of industries. The man at its centre, ES Ranganathan, managing director of Indraprastha Gas, puts it understatedly: “The government wants to broadbase the use of gas.”

Almost on cue, the last year has seen Indraprastha Gas expand the scope of its operations outside of the National Capital Region. It won bids to offer its services in Meerut, Muzaffarnagar and Shamli in Uttar Pradesh, Karnal and Rewari in Haryana, and Ajmer in Rajasthan, giving it ample scope to expand volumes in the years to come.

Where Indraprastha Gas scores above rivals is in its growth rates, capital efficiency (it has zero debt and doesn’t plan to change that despite an aggressive investment plan totalling ₹5,000 crore over the next four years) and margins. It’s something investors noticed. Over the past 10 years, sales and profits have compounded at 21.6 percent and 15.7 percent respectively. As a result, at 23 times, it has a higher earnings multiple than listed rivals Mahanagar Gas and Gujarat Gas. Its 21 percent return on equity compares favourably with larger Asian rivals—Hong Kong and China Gas Co Ltd and Petronas Gas Bhd. What makes Ranganathan most excited these days is that Indraprastha Gas, which has spent the past two decades laying pipelines in the NCR region, is well positioned to capitalise on the massive growth opportunity ahead.

Network Expansion
India’s journey towards burning cleaner fuels started through judicial intervention. As pollution levels in Delhi moved up in the late 1990s, the Supreme Court mandated that all public transport vehicles move to CNG. Gail, which had a pipeline bringing gas to Delhi, and Bharat Petroleum were tasked with the job and, along with the Delhi government, Indraprastha Gas was formed. Government shareholding was kept at 50 percent instead of the usual 51 percent to enable faster decision-making.

The next two decades saw the gas network expand in the NCR, Gujarat and Mumbai with a total of 1,424 CNG stations and 30 lakh vehicles running on the green fuel by March 2018, according to the Petroleum Planning and Analysis Cell. Coverage in other parts of the country was planned but in the absence of sufficient gas allocation city gas utilities went slow in expanding CNG networks. Utilities function in geographical areas and, until 2018, 92 such areas had been allocated across the country.

That changed in 2018 when the government announced that it planned to reduce India’s dependence on liquid fuels and up the use of natural gas in India’s energy basket from 6 percent then to 15 percent by 2022. In September, during a trip to the US, Prime Minister Narendra Modi signed a deal to import 5 million tonnes of liquefied natural gas per annum from oilfields in Texas. Bids were invited from private entities to set up CNG stations and supply piped natural gas (PNG) to households.

Starting April 2018, the Petroleum and Natural Gas Regulatory Board allocated 136 geographical areas to various city gas utilities in two large bidding rounds, taking coverage up from 19.8 percent of the population to 70.4 percent. According to plans submitted by the successful bidders, the number of CNG stations is likely to see a nearly fourfold increase from 1,734 at present to 7,924 by 2028. In addition there is also a target to connect 100 million households to PNG for cooking.

There are already signs of an impressive ecosystem of CNG products building up. The mix of CNG cars at the country’s largest carmaker Maruti Suzuki rose to 6 percent of total sales in the year ended March 2018, a 40 percent increase from the previous year. It plans to discontinue diesel cars from April 2020 and replace them with CNG variants. “We’ve also seen manufacturers launch tractors and diesel generators running on gas,” says Amit Garg, director, commercial, Indraprastha Gas. 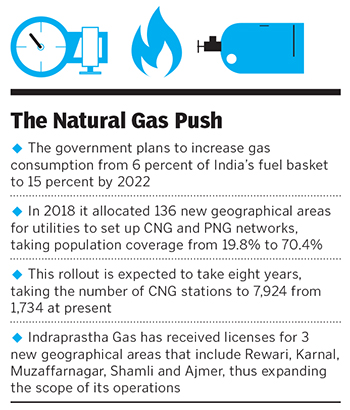 First-Mover Advantage
Among the most significant advantages that Indraprastha Gas has is that its areas of supply are more or less contiguous. This helps it defray infrastructure costs. The areas it operates in are also densely populated, and that means fewer pipelines can provide connections to a large number of people.

“Delhi is so vast that in an area like Tilak Nagar I can get 20,000 households and two CNG stations with 25,000 kg of sales. It will take me five years and ₹100 crore of investment to get similar numbers in Karnal, our new geographical area,” says Ranganathan, who adds that the company looks for a minimum 14 percent rate of return while planning new investments.

A key advantage in making new investments is that, at a profit run rate of ₹1,600 crore a year, Indraprastha Gas can easily meet its investment requirements of ₹1,000 crore annually from internal accruals and still leave money on the table to distribute to shareholders. “It is here that I would like them to be more aggressive. They have a clear revenue stream and new geographical areas to deploy their earnings,” says Vivekanand Subbaraman, who tracks oil and gas for Ambit Capital. This is unlike rivals Adani Gas, Gail Gas, and Torrent Gas who also won several geographical areas but will have to take on debt as they roll out their networks.

Apart from financing, a crucial and often underestimated facet of rolling out networks is the time it takes in getting land and approvals to set up CNG pumps as well as approvals to provide PNG in housing societies. Indraprastha Gas has taken two decades to reach its network of 515 pumps and points to this as a competitive advantage even as there are reports that its marketing and infrastructure exclusivity could end. (In 2016, the regulatory board had held that Indraprastha Gas's marketing exclusivity in Delhi had expired; the company challenged the ruling.) The company declined to comment on this, since the matter is sub judice.

Indraprastha recently announced that it plans to tie up with landowners and share the costs of setting up new pumps. In contrast Mahanagar Gas, which supplies to the Mumbai Metropolitan Region, has 223 pumps, and has been unable to open a pump south of Worli in Mumbai.

For now Indraprastha’s business split is 75 percent CNG, 8 percent PNG and 18 percent industrial users like factories and restaurants. The Delhi government has helped in keeping prices low by lowering excise duty and value-added tax, resulting in CNG being sold for ₹45.2 per kg in Delhi (the cheapest in the country) or 13 percent cheaper than in neighbouring Noida.

Margins at ₹6.4 per standard cubic metre are among the highest in the industry and could attract regulatory scrutiny. (In the past the courts have held that the Petroleum and Natural Gas Regulatory Board has no role in deciding retail prices.) Ranganathan is conscious of this and says that the company plans to maintain margins at these levels. “We have to look at prices and compare them to the differential with other fuels [diesel] and that differential should be in the 30 percent range,” he says. This price difference should see the company grow volumes at 10 to 12 percent for the next three years at least.

One final edge that Indraprastha Gas has is the stakes, 50 percent each, it took in Central UP Gas and Maharasthra Natural Gas, which supply to Kanpur, Bareilly and Pune. These stakes have taken the better part of half a decade to mature but now bring in upwards of ₹100 crore annually as their operations mature. Ranganathan says the company is looking at making acquisitions and they are in active valuation discussions. A successful acquisition would bring in yet another growth lever.

Tweets by @forbesindia
Christmas shopping: The worst tech gifts we give (and how to do better)
Infographic: RIL's key milestones as it hits Rs10 lakh crore market cap