With philanthropy, Azim Premji's legacy goes, well beyond Wipro. And like the IT company and his private office that back startups, he has built an extensive institutional network for the purpose of giving 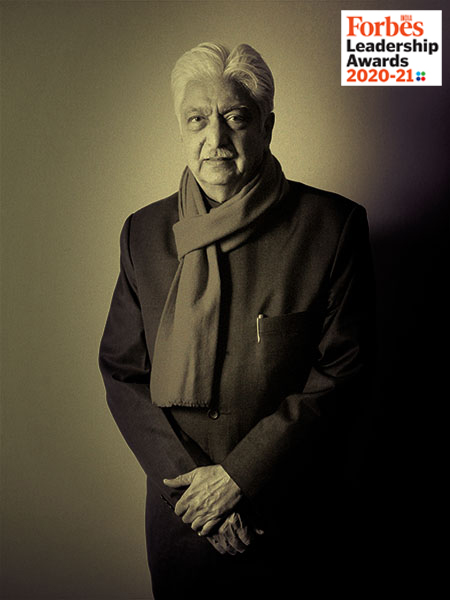 I strongly believe that those of us who are privileged to have wealth should contribute significantly to try and create a better world for the millions who are far less privileged. I will continue to act on this belief,” wrote Azim Premji in a letter in February 2013 to the first international group of the Giving Pledge. He has remained true to his word.

Premji, 75, who turned his parents’ vegetable oil business into Wipro, India’s fourth-biggest IT services company, is among the country’s most prominent philanthropists. The Azim Premji Foundation and Wipro are spending ₹1,125 crore to help India fight the Covid-19 pandemic. One of Wipro’s centres in Pune was also converted into a 450-bed intermediary care Covid-19 hospital.

As part of its humanitarian assistance, the foundation is reaching over 7.9 million people in rural areas of 12 states for livelihood regeneration, including access to entitlements, it said on its website in December 2020. It had offered “immediate assistance” to around 8.4 million people in 26 states and three Union Territories, and its food support translated to around 310 million meals at the time of the update, according to the foundation.

“Premji is remarkable at creating an environment that fosters the development of institutions. This requires the ability to balance complete commitment to the cause and purpose, an absolute commitment to values, and, total empowerment of the teams,” says Anurag Behar, CEO of Azim Premji Foundation. “On an everyday basis, this means deep engagement but zero interference. I have never seen anybody or even heard of anybody who is like him on the mix of these abilities.”

Premji started the foundation in 2001. In 2010, he transferred Wipro’s shares worth $2 billion at the time to the trust that controls the foundation, which he chairs. Coinciding with the 2013 Giving Pledge, he gave shares worth $2.3 billion at the time, in February 2013, to the trust. The pledge was started by Microsoft co-founder Bill Gates, his wife Melinda and investor billionaire Warren Buffett in 2010.

In March 2019, Premji gave the trust an additional 34 percent of Wipro stock, valued at $7.5 billion then, from his personal holdings. In total, he has committed over two-thirds of economic ownership in Wipro to his philanthropic work—valued in March 2019 at $21 billion.

The foundation has three units. First, the work with the public school education system that spans the entire range—from deep on-the-ground work in the most disadvantaged parts of the country to work on education policy and curriculum. For this, it has institutional presence in 48 districts. Second, the universities—one that it runs in Bengaluru, another that it is setting up in Bhopal and three more that are planned. Third, the philanthropic initiatives through which it provides support to other non-government organisations in specific fields of work with multi-year financial grants.

“We have the satisfaction that we have contributed in a meaningful way across all the fields of our work, and in some areas quite significantly,” says Behar, who is chief sustainability officer at Wipro and vice chancellor of Azim Premji University. “However, we are acutely conscious that the kind of institutions that we are developing takes decades to fulfil their promise, so it is too early to claim any ‘significant role’ across the vastness of India.”

The foundation is committed to contributing to the development of a just, equitable, humane and sustainable society—one that lives up to the Constitutional values of India, he adds. “In such an endeavour we have to just keep going on.”

As the extent of the coronavirus crisis started becoming evident, in the first 30 days of the pandemic, the foundation mobilised a dedicated team of over 30,000 people on the ground across 250 districts. In another 30 days, this number swelled to 65,000 in 400 districts. They were instrumental in getting humanitarian aid where it was most acutely needed, and later, to collaborate with state governments to tackle the pandemic itself, explains Behar.

This is how, it was, for example, able to deliver 320 million meals to nearly 9 million people. The 65,000-people strong team consisted of members of the foundation, thousands of government school teachers with whom it works in its education efforts, team members of its more-than 500 partner organisations whom it supports through grants, and the alumni of its university. The effort tapped Wipro’s technical expertise and distribution reach as well.

This large scale on-the-ground operation was supported by teams of experts (for example in health care) and a highly efficient supply chain that the foundation established. It included making the most of Wipro’s significant presence across the country. The humanitarian work was not only about delivering food and other necessities, but also helping to regenerate livelihoods, particularly agrarian livelihoods and creating access to plans such as Mahatma Gandhi National Rural Employment Guarantee Act (MGNREGA). This work has tapered off in the past three months, Behar says, while the work to tackle the pandemic continues. 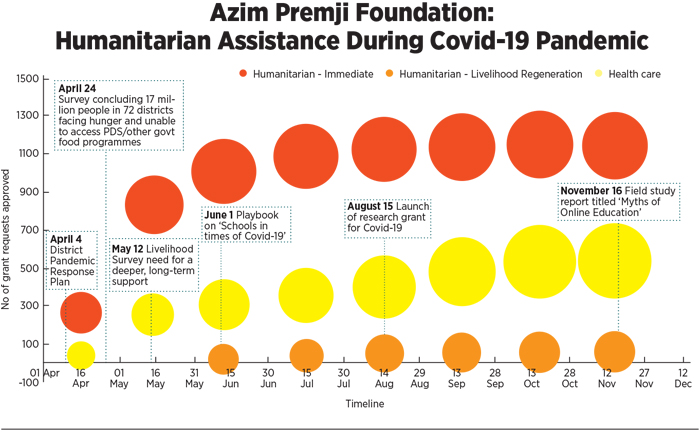 Some 900 entries competed for the awards in 2020, submitting projects and essays on biodiversity, waste and water management and agriculture in the urban sustainability context. Since its inception, the programme has touched more than 55,000 schools and colleges, 130,000 students and 13,000 teachers in different parts of India.

Premji makes time to participate in the Earthian awards events and even fields questions from students and teachers—the finalists—who attend. One question, from an event three years ago, was, ‘How can companies pay attention to sustainability in the competitive commercial world?’

“I think too many issues of sustainability are being de-prioritised because of commercial interests, and one has to make commercial interests secondary, behind sensitivity for the environment, which doesn’t always happen,” Premji had replied. “I think government policy should be directed towards it and there should be proper enforcement of such a policy on an ongoing basis. And it requires pushback from people such as you, because you represent the population.” 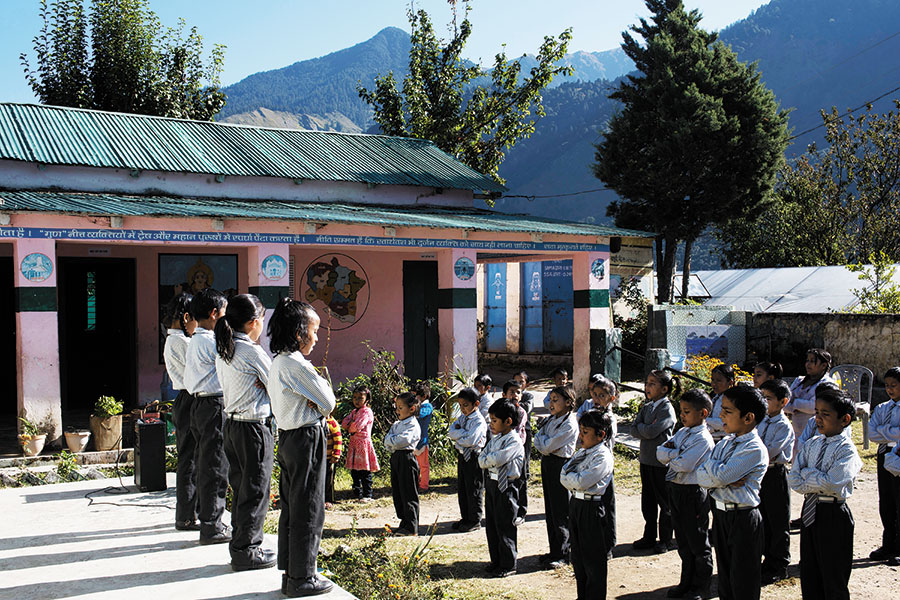 When asked if working with Premji for many years had given him a glimpse about what drives him, Behar says: “With Mr Premji, what you see is what he is. What he is in reality is also is what he is in public. I don’t think we should hunt for a special insight.”

“He has been so candid that he is inspired deeply by his mother’s example of running a charitable hospital for 50 years, and then subsequently by Mahatma Gandhi’s idea of ‘trusteeship of wealth’,” adds Behar. “All I can say is that he is absolutely, completely and unflinchingly committed to doing everything that he can to help India become a better place for all its people, particularly the most vulnerable—in essence to see our Constitutional vision and values actually being lived by us, and, experienced by everyone on an everyday basis.”

Even though Azim Premji Foundation’s work is well-known today, its true impact will take decades to be realised, spawning future public-spirited leaders from among the schoolchildren who are benefiting from it. “I wish I had started earlier, maybe in 1990, not in 2000,” Premji had told Forbes India in 2012. That sense of time lost—with so much more to do—seems to have remained with him. At the Earthian award event three years ago, another question to him was, ‘Are you happy with all that you have done?’ His reply: “No, no, I’m not happy, and that is the feedback I give to my leaders as well.”

And son Rishad Premji, first among those leaders, echoed the sentiment in the context of the fight against Covid-19: “I can only say the pandemic has amplified every inequity and disadvantage that hundreds of millions of our fellow citizens face. Our gaze cannot avert from this anymore. It is a challenge to all of us to do a lot more,” he told Forbes India in December 2020. “People have done a lot in the past few months, but it is nowhere near what is required. And even more fundamentally, we need to eliminate the structural causes of these inequities and injustice. We truly need to transform our society.”

Tweets by @forbesindia
Food Waste: How much food do we throw away every year?
'IT Act doesn't allow for regulation of digital news media'