Beijing reported Tuesday that the population shrank last year for the first time in over half a century, deepening a demographic crisis that experts warn could stymie economic growth and pile pressure on public coffers 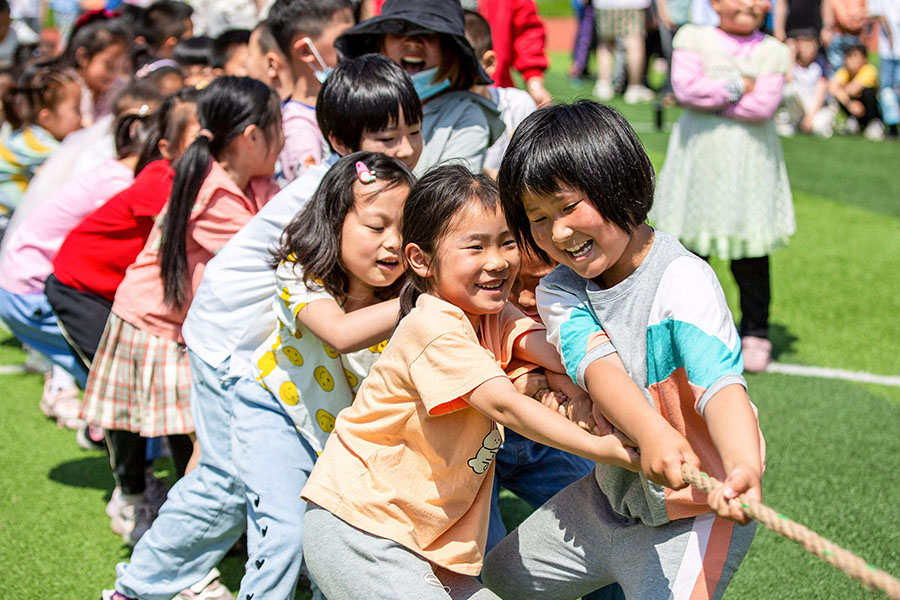 A place in a private kindergarten in China can cost anywhere between 5,000 yuan ($740) and 20,000 yuan a month in Beijing, according to the Asia Society Policy Institute. Image: STR / AFP

Weary parents in China say the difficulties of juggling work and childcare in a costly and ultra-competitive society with little help from the state are at the root of the country's dwindling birth rate.

Beijing reported Tuesday that the population shrank last year for the first time in over half a century, deepening a demographic crisis that experts warn could stymie economic growth and pile pressure on public coffers.

Local authorities across China have unveiled a series of measures to encourage child-bearing, including monthly stipends of several hundred yuan for new parents and one-off "birth bonuses".

But those already with kids told AFP that balancing work in China's cut-throat corporate world with a desire to give their offspring the best in life was dissuading many from having multiple children.

"Many households find it extremely difficult to raise one child and can't handle it very well," said Wenjing, a parenting blogger in her late 30s who decried "flimsy" government support.

"With the pandemic, a lot of households really suffered financially. Under these hard circumstances, many people decided not to have any more kids," she said.

"I think whatever policies released now will be very insubstantial."

China ended its draconian one-child policy in 2016 and then in 2021 allowed couples to have up to three children.

Major cities including Beijing and Shanghai have extended maternity leave to up to 158 days, while health authorities last year rolled out guidelines requiring local governments to provide nurseries, albeit for a fee.

But many obstacles remain, with no breastfeeding facilities at most workplaces and unmarried women barred from freezing their eggs.

A place in a private kindergarten can cost anywhere between 5,000 yuan ($740) and 20,000 yuan a month in Beijing, according to the Asia Society Policy Institute.

Many urban youth also live far from their extended families, cutting off a traditional source of childcare.

Also read: Working parents feel pulled in two directions. What does this mean for companies?

For Nancy, a young Beijing mother in her early 30s who works in e-commerce, managing work and childcare is a Herculean task.

"If you want to breastfeed the child then you basically have to give up work," she said.

"But because of our situation, we cannot give up our jobs."

Social expectations about how children should be raised also play a role, she said, with ambitious parents keen to make sure their kids get the best.

Women were often forced to choose between the ideal of what good parenting means in modern China and having a career.

"If you have lower standards then perhaps you won't be as tired, but everyone mostly raises their kids in a meticulous way," Nancy added.

"If you insist on leaving work at five to look after your child, less work may get assigned to you and you will be surpassed by your colleagues."

"The ability of our generation to go to work is basically through the exploitation of our grandparents, who help us raise our children for a few years," Nancy said.

I don't do any parenting

Ivy Meng, in her early 30s, told AFP her young son was "mostly raised by his grandparents" during the pandemic, when schools were shut and she and her husband continued to work full-time.

When it came to choosing between work and time with her child during the week, she chose the former.

"I really don't do any parenting," she said.

"I return home very late each night and don't see my son much."

She told AFP she is one of the lucky ones—many young Chinese women simply do not have such support networks readily available.

"A lot of the time, their husbands don't want to shoulder the responsibility of parenting and their parents or in-laws are not willing to help," she said.

Experts say much more needs to be done to support young parents and reduce the cost of raising kids.

For many Chinese, the pressures are currently just too great.

"No matter how much the government gives me or if they offer a better environment, I wouldn't choose to have more kids," Nancy said.

"It's not something that can be solved financially."

Tweets by @forbesindia
Can the Walkman make a comeback in the streaming era?
Shashank Randev at 100X.VC on being an optimist and why 2023 is a great year to startup