Working parents feel pulled in two directions. What does this mean for companies? 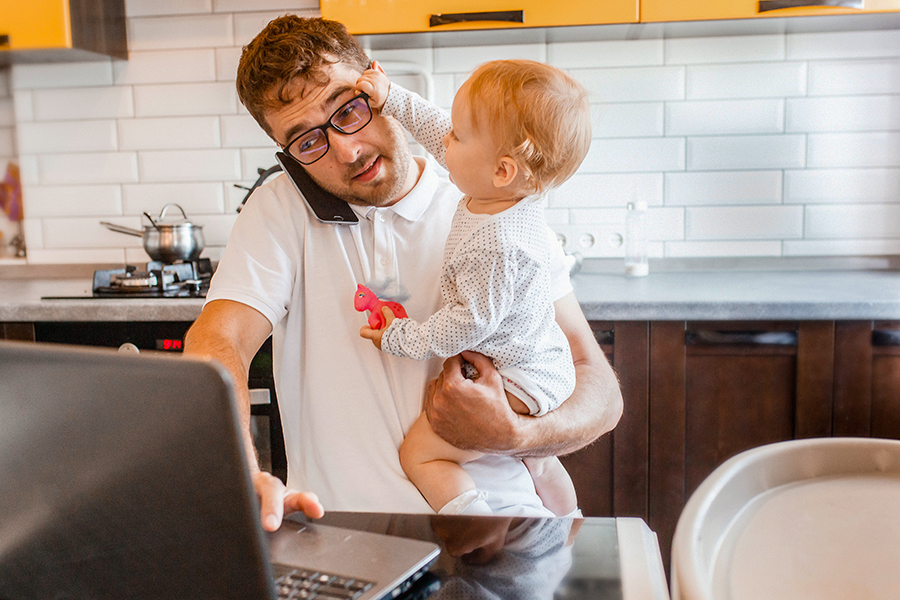 Parents are always questioning whether they’re being a good parent, and there’s so much societal pressure about the ‘right’ way to parent. All these pressures put so much burden on us that shame becomes a prevalent emotion

For working parents, every day is a juggling act. You’re trying to keep an eye on an important deadline here and a piano recital there—without letting anything drop.

Trying to do it all can provoke complicated emotions. New research from Cynthia Wang, a clinical professor of management and organizations at the Kellogg School, finds that working parents are vulnerable to fears that they aren’t focusing enough on child-rearing. While that may not be a surprising finding to most working parents, the research goes on to show that these worries can trigger feelings of shame that lead to reduced productivity at work.

The researchers focused on what they call parental-identity threat, the sense that your role as a parent has been challenged by career demands. “As an example, sometimes I teach in the evenings and have to miss special events,” Wang explains. “In these types of situations, my identity as a parent is unfortunately being threatened because of what’s been happening at work.” The threat can be triggered in many ways: by a schedule conflict, a comment from a colleague, or the realization that you’ve forgotten something important on the home front.

Wang is not surprised that the experience can promote so much shame.

“Parents are always questioning whether they’re being a good parent, and there’s so much societal pressure about the ‘right’ way to parent. All these pressures put so much burden on us that shame becomes a prevalent emotion.”

Still, it’s not all bad news. Wang and her coauthors—Rebecca Greenbaum of the Rutgers School of Management and Labor Relations, Yingli Deng of Durham University, Marcus Butts of Southern Methodist University, and Alexis Washington of Oklahoma State University—found that these feelings of shame can prompt parents to spend more quality time with their children. They also learned that not everyone falls victim to shame when they feel they’ve fallen short as parents.
Understanding Working Parents’ Shame

The researchers chose to focus on people’s identity as a parent and not their identity as an employee, because even though everyone has multiple roles, parental identity is arguably the more central of the two. After all, caring for one’s offspring is integral to human nature and there is a strong cultural consensus that parents should prioritize their children’s needs above the needs associated with other role identities.

The researchers first wanted to better understand the nature of the threat that parents feel when their work life disrupts their home life. Who is the most impacted? How does it make them feel? And does it affect their productivity at work?

The researchers began by recruiting 201 working parents to complete an online study before their workday began. Participants first answered a set of questions designed to assess their emotional stability, or ability to handle stressful situations calmly, rating how much they exhibited traits such as moodiness and jealousy.

Hours later, after work, all participants reported their shame, rating how much they felt ashamed, humiliated, and embarrassed at that moment. They also rated how productive they had been at work that day.

Not surprisingly, participants who read about the perils of being a working parent reported more identity threat than those who did not. Those in the high-parental-identity-threat group also reported higher levels of shame and lower levels of work productivity.

But there was an interesting catch: for participants with high emotional stability, experiencing parental-identity threat did not lead them to feel shame, and their work productivity was unharmed.

When parental identity is threatened, moms and dads double down

In their next study, the researchers wanted to understand how parental-identity threat would affect parental involvement. Would feeling criticized actually shame parents into spending extra time with their kids?

To answer that question, the researchers recruited 259 sets of spouses who were both working parents, with one partner serving as the main participant and the other offering an outside perspective.

To begin, the main participants rated their levels of parental-identity threat, shame, and workplace productivity over the past week, as well as their overall emotional stability, using the same questions as the first study. For a more objective outside view, spouses rated how often in the previous week the main participants had spent quality time with their children.

The results of the second study replicated what the researchers saw in the first: parental-identity threat triggers feelings of shame, which, in turn, leads to lower productivity. And the researchers’ analysis showed that higher levels of emotional stability again put the brakes on this cycle, preventing the feelings of shame and its downstream effects.

But experiencing shame also had a potential upside, the researchers learned: participants who felt more shame from parental-identity threat also invested more energy into parenting. In short, “we make up for the shame that we’re feeling by spending more quality time with our kids,” Wang explains.

A real-time view of working-parent guilt

In the last study, the researchers examined how all of these factors, from shame to productivity, played out in real time. Once again, they recruited spouses who were both working parents, with one partner serving as the main participant and the other offering an outside perspective.

The main participants completed a morning and afternoon survey each day for 15 days, answering questions about their parental-identity threat, shame, and (in the afternoon survey) workplace productivity. This time, on the theory that outsiders might offer a more realistic personality assessment, spouses rated the main participant’s emotional stability, as well as their parental involvement during afterwork hours.

As in the first two studies, higher levels of parental-identity threat were associated with stronger feelings of shame, leading to decreased productivity. While the researchers’ analysis showed that shame did not lead to greater parental involvement on the same day, it did cause parents to spend more time with their kids the next day.

That makes sense to Wang. “Shame isn’t an emotion that you automatically react to,” she says. “You mull it over, you ruminate, and those emotions sink in. It takes time to process and respond to.”

How to help working parents cope with shame

Interestingly, across all three studies, gender did not affect the researchers’ findings—there was no difference between how moms and dads responded to parental-identity threat. “Of course, there are still huge discrepancies for working parents by gender,” Wang says, in terms of what is expected of them at work and at home. “But our findings show that all genders are affected by this threat. That’s something we have to consider as a society. Everybody feels stressed out.”

The results suggest that it would be wise for organizations to understand the psychological challenges working parents face, and try to reduce feelings of shame among those employees. In addition to being careful in how they speak to and about working parents, managers can send the message that work and parenting aren’t in conflict by offering lots of schedule flexibility.

For working parents themselves, Wang prescribes a hearty dose of self-compassion. When something comes up at work that takes you away from family life, you can short-circuit the shame cycle by not viewing the conflict as an indictment of your parenting. “You can reappraise it as, ‘Hey, this is just something that happens.’ Don’t be so hard on yourself.”