Salicornia, a succulent, is already being used as a salt replacement in burger patties—a rare farming success in the oil-rich United Arab Emirates, which imports nearly all of its food 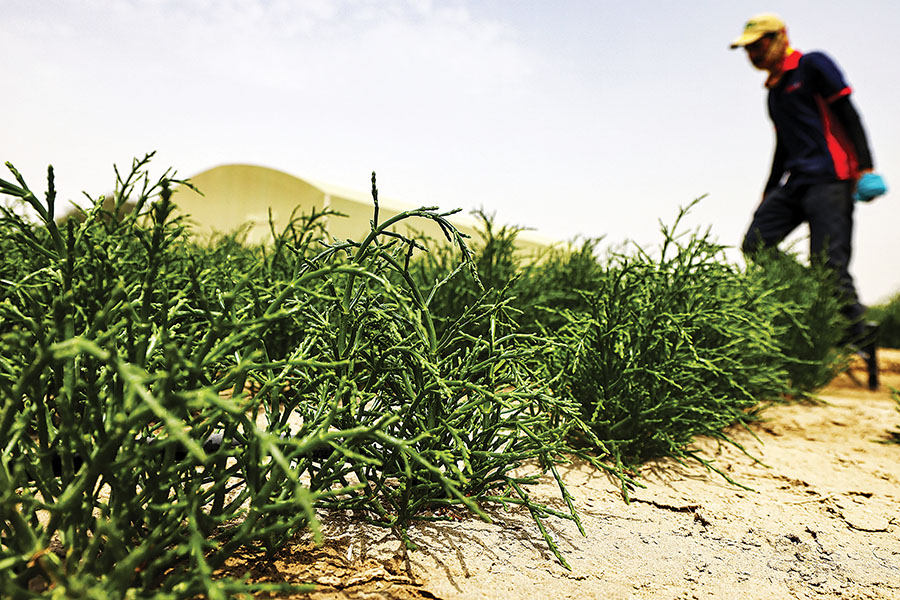 Salicornia, a succulent, is already being used as a salt replacement in burger patties -- a rare farming success in the oil-rich United Arab Emirates, which imports nearly all of its food.

"You have the salty flavour with less sodium, but you also have other benefits," said Tina Siegismund, head of marketing and innovation at UAE-based Global Food Industries, a frozen food manufacturer.

The asparagus-like plant reduces sodium content by 40 percent in the company's healthy burgers, which also contain chicken, quinoa and kale.

Native to parts of North America, Europe, South Africa and South Asia, the plant is ideal for the UAE's inhospitable climate, and contains anti-bacterial and anti-inflammatory properties, according to Siegismund.

Agriculture produces less than one percent of GDP in the UAE, a country on the frontline of climate change with temperatures regularly topping 50 degrees Celsius (122 Fahrenheit) and rising rapidly.

Salicornia cultivation began last year in a number of farms across the UAE as part of an experiment using brine run-off from desalination plants by the Dubai-based International Center for Biosaline Agriculture (ICBA).

Augusto Becerra Lopez-Lavalle, chief scientist at ICBA, said research was now underway into generating more of the "high-value crop", which sells for $20 a kilo (2.2 pounds) in France.

"We went from... building this prototype, to piloting at scale with eight farmers, and now the question is how to scale up," Lopez-Lavalle told AFP.

In the future, salicornia could "become a really important food ingredient" he added.

"If there is an economic value and the production system is developed for this, it can become a replacement for salt and any other micronutrients that are added today artificially to processed food."

For now, salicornia remains a niche product, its health benefits unknown to most, admits Siegismund.

"It's not a product that makes big, big profit, but we believe in it and we will continue," she said.

Tweets by @forbesindia
From 'Stranger Things,' to 'The Avengers' and 'Harry Potter,' fanfiction videos are booming on TikTok
Coinbase to premier Bill Murray's biological NFT project