The first step was a confession session with colleagues. Share The Load was launched in January 2015, and every year, a new truth was revealed 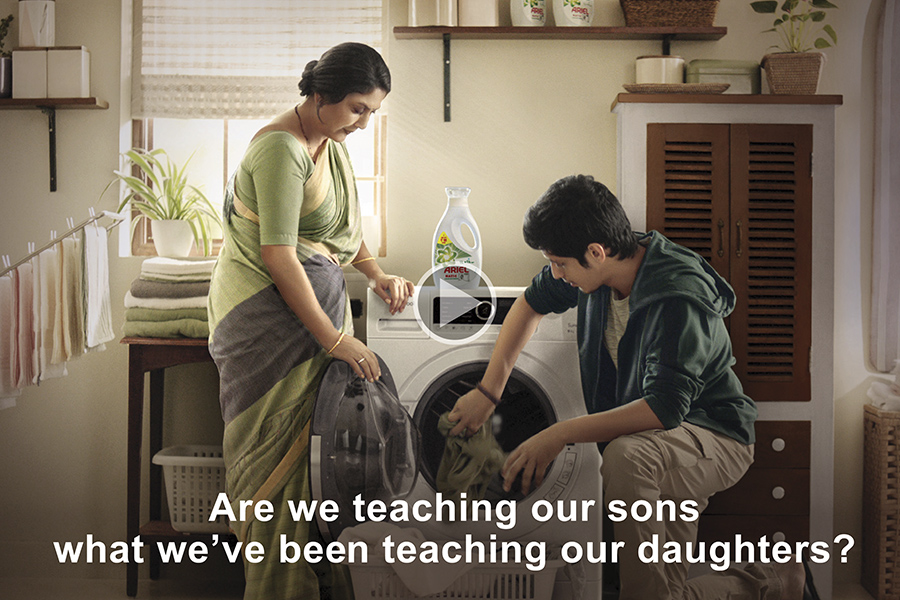 The client brief to the creative agency was simple: Build emotional equity for Ariel, the flagship detergent brand from P&G. Apparently the task was easy. Well, this is what anybody would think of a product whose performance was best in class. Josy Paul, though, knew that wasn’t enough. “Something more was needed,” recalls the chairman and chief creative officer of BBDO India. “We knew we could not just talk about the detergent’s ‘one-wash’ performance.” What was required was a greater emotional connect with the consumer. Paul, along with his team, started hunting for ‘something more empathetic’ in January 2015. The question staring at Paul was: How can the brand empower the lives of women? The content was obviously rich, but the context was missing. Context, he says, was about what’s happening in the lives of women or all the things that are influencing them. The first step was a confession session with colleagues. “It’s a process we follow for most of the big challenges we receive,” explains Paul. Different departments held 2-3 hour sessions where people talked about their lives. The process of sharing uncovered something startling: Women in India spend close to five hours doing household work and the men only 19 minutes. “This is a tension simmering within families and no one was talking about it,” says Paul. P&G’s brand proposition professed ‘Ariel washes the most stubborn stains with just one wash.’ Paul added a line to it: ‘Anyone can do it.’ In one stroke, the gender stereotype of laundry being only a woman’s job was questioned. “This is how the Share the Load campaign was born,” Paul recalls. Share The Load was launched in January 2015, and every year a new truth was revealed. While the first year was about asking the question ‘Is laundry only a woman’s job?’ the next year the campaign explored the root cause of such social conditioning. The new truth was ‘Children learn what they see.’ As most of them have never seen their dads do laundry, they grow up imitating what they’ve seen and learnt at home. “The Dads#ShareTheLoad film in 2016 was about setting the right example by being the right role model,” says Paul. The year after, Paul asked another uncomfortable question: Are we teaching our sons what we’ve been teaching our daughters? Sons#ShareTheLoad upped the conversation on the subject. It was even discussed at the World Economic Forum. Cut to 2020. The pandemic uncovered another startling truth: 71 percent women in India sleep less than their husbands due to household chores. So a campaign focusing on #ShareTheLoad for equal sleep’ was rolled out. “WFH culture has impacted behaviour at home. Distribution of household chores is now an everyday conversation,” says Paul. The lockdown amplified an issue the brand has been talking about since 2015. When you are in the home situation and you see things play out, Paul explains, that’s when change happens. “With empathy comes greater understanding and genuine change,” he says, adding that Ariel has been receiving affirmations from couples now dividing their household chores in between Zoom calls and official presentations. For Paul, Share The Load was also a catharsis moment. “As a father, husband, son, and brother, I wasn’t that involved in household work,” he confesses. In a way the campaigns he created for Ariel were changing him too. “I knew that a campaign that was meant to change millions had to start with me,” he says. The song that inspired the change was: “Let it start in me, let it start in me, there’s a change a coming, let it start in me…”

Tweets by @forbesindia
Donorbox now supports Indian nonprofits to receive donations
Photo of the day: Celebrating Teej in a pandemic