As US immigration regulations diminish the appeal of the American dream, Indians are turning to academic alternatives in Asia and Europe, where there is a rise in quality business schools and post-study job prospects 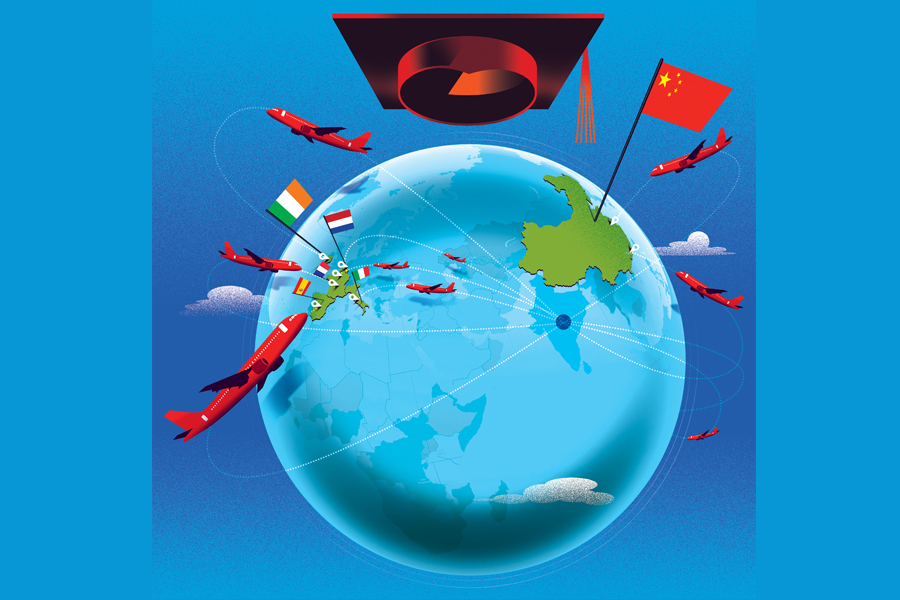 In November, one of China’s biggest sportswear brands Xtep, with a market value of approximately $2 billion, launched in India through the entity called VRX Sports. Ritwik Ghosh, the man behind the Chinese brand’s entry into the country, was glad that many of his career choices and risks were paying off. One of them was picking the China Europe International Business School (CEIBS) for an MBA over The Wharton School in the US.

Growing up in Jharkhand, Ghosh wanted to get out of his job with the merchant navy to explore a new career in cross-border investment. While he opted for CEIBS on an intuition, the 38-year-old investment professional believes that the dynamic economic situation in China is opening up many career growth opportunities. “Given that I have knowledge about both markets, I can now match Chinese companies looking to expand globally with investment opportunities in India,” the Shanghai resident explains.

His alma mater, which Ghosh says was the “best unknown school in the world” when he graduated in 2011, today finds a place in the Financial Times’ rankings of the top 10 business schools of the world, the only Asian institution in the top tier. According to Professor Juan Antonio Fernandez, MBA director, CEIBS, the school is anticipating up to a 3 percent increase in the number of Indian students enrolling in the MBA programme next year. In 2017 and 2018, Indians occupied 5 percent of the total class strength of about 179 and 175 students respectively.

While Singapore has been an early provider of high-quality business school training in Asia, China is emerging as another favourite. These schools are being preferred by Indians like Ghosh, who are either looking for career shifts or want to make the most of opportunities created by increasing trade and business relations between India and China. International management students in China are given merit-based scholarships that cover up to 65 percent of tuition costs, apart from internship opportunities in various fields including financial services, technology, health care and manufacturing.

“Indian students can provide insights into the Indian culture and business world, which are invaluable today with countries interconnected through global trade. They can help open doors that would have otherwise been closed,” Fernandez says. “Likewise, Indian students and alumni look to their Chinese peers and faculty for guidance when they need to truly understand China. Friendships forged during late-night study sessions, group projects or simply chatting over a cup of tea can go a long way towards paving the way for greater understanding when there are larger issues—such as a business venture.”

According to the data released by the American non-profit Graduate Management Admissions Council (GMAC), administrator of the GMAT entrance exam, US business schools (B-schools) are losing their lustre among international students. The numbers show a fourth successive year of declining MBA applications for business schools, including Harvard, Stanford and Wharton. The elite institutions saw a fall in enrolments by 4.5 percent, 4.6 percent and 6.7 percent respectively in 2018. On the other hand, business schools in Europe and Asia Pacific have seen a solid and steady growth in the same period.

Management education aspirants in India are also gradually looking beyond the US by placing their bets on programmes in non-mainstream destinations like Ireland, The Netherlands, Spain, France and China. The reasons range from better post-study job opportunities to the confidence that the global nature of hiring today will help them make the most of whatever international exposure they choose to receive.

Affluence & Aspiration
“Looking at education destinations beyond the US is linked to growing affluence. Today, more people can afford to experiment and seek ‘non-mainstream’ MBA degrees in locations other than traditional Anglophone countries like the UK, US, Australia and Canada,” says Anip Sharma, partner, LEK Consulting, a global management consultancy. “Universities are realising that international students are a good revenue generator, which is why they have been focussing on launching quality English programmes to attract a portion of the Anglophone demand.”

According to Sharma, course duration is a major edge that MBA programmes in Europe and Asia have over the US. “Students prefer a one-year or 14-month MBA, as opposed to the intensive two-year courses offered in America, because their return to the job market is quicker,” he says. “Not to mention that shorter duration also means less expenditure.”

This is perhaps why non-English-speaking countries like France are seeing a sustained spike in demand from Indian students. According to the Embassy of France in India, there were 7,500 Indians studying in the European country in 2018, up from 5,300 in 2017 and 4,300 in 2016. Roughly 80 percent of these were management students. “The trend should grow stronger with the recent signing of the agreement to facilitate mutual recognition of academic qualifications. This is the first agreement of this scale between India and another country. We should reach 10,000 (strength of Indian students) by 2020,” says a French embassy official.

The employment mobility scope that Europe offers is one of the main reasons Gurugram resident Jyotsna Goel chose INSEAD in France over admission offers from the National University of Singapore (NUS) and the Indian School of Business (ISB). Goel, who is currently a senior solution analyst (strategy and corporate finance) at McKinsey & Company, did not even consider the United States, Australia, the United Kingdom, Canada or other ‘mainstream’ options, despite the tuition fee for a one-year MBA programme at INSEAD costing approximately USD 97,500 (about
₹68 lakh), excluding living expenses.

The 25-year-old, who will join the September 2019 intake of MBA students, says that affordability, student diversity and chances of quicker return on investment is better in France. “The mobility and diversity offered by MBA programmes in Europe excite me to pursue a career there post my studies. The political uncertainty and ambiguity in the US has also influenced my decision,” she says.

International Exposure
Mrinalini Batra, founder, International Educational Exchange, points out that youngsters across India are more aspirational than the previous generations, which is why international business programmes receive applicants even from Tier 2 cities and smaller towns. “A number of students who want international exposure opt for Asia because they will not have to make a huge cultural shift,” she says.

According to Jharana Sheth, MBA head at education consultancy OnCourse Global, emerging B-school destinations are working hard to market themselves, while curating better quality programmes and offering attractive scholarships. “Increasing enrolments create a strong alumni network across countries, while marketing builds brand value and recall among recruiters and prospective students,” she says. “Because no matter how good a programme is, if recruiters or students are unaware of the school or anyone who has studied there, they will remain sceptical. There is only so much one can gauge from rankings.” 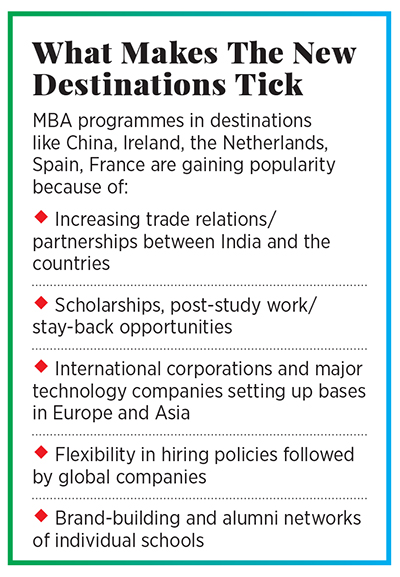 Irish higher education institutions, for instance, are offering over 200 merit-based scholarships ranging from approximately $1,100 (₹79,700) off course fees to 25 percent or 50 percent fee waivers. According to Barry O’Driscoll, regional manager, South Asia and Latin America markets, Education in Ireland, there are 4,000 Indian students in Ireland at present, 50 percent of which have enrolled for management, finance and business-related programmes.

“Many students opting for a masters in business/management come from technical backgrounds like IT, engineering and science at the undergraduate level. This, combined with a management degree, is a sought-after profile in Ireland, particularly for the big ICT and tech companies based around here,” he says. “International students at postgraduate level can remain in the country for two years to look for employment and undergraduate students can stay for a year.”

The Netherlands highlights that its Dutch universities offer the largest number of English-taught programs (2,100) in continental Europe. The country saw a 30 percent rise in enrolment from Indian students in 2017, and had 242 students studying economics and business administration in the same academic year. Anwesha Majumder, chief representative officer of Nuffic Netherlands Education Support Office (NESO) India, a non-profit for international cooperation in higher education, says that their recently-launched Orange Tulip Scholarship programme for the upcoming academic year has “12 Dutch universities offering scholarships with a total worth approximately $448,978 (₹3.15 crore) for various business and management courses.”

Since the main goal of an MBA aspirant is to find a job opportunity that provides quick return on investment, the choice of a destination is often tailored according to the personal goals, says Adarsh Khandelwal, co-founder of education consultancy Collegify. These emerging destinations, he explains, are also being preferred by students who are focussed on a certain industry that a particular country is good for. For instance, fashion enthusiasts are picking an MBA in SDA Bocconi School of Management in Milan, Italy, or HEC Paris, France, in order to build the right kind of professional networks and relevant industry connect.

For many young aspirants, making these unconventional choices is also about striking a balance between their aspirations and what their parents agree to. As 24-year-old Shreya Agarwal explains, her decision to do an MSc in International Management from ESADE Business School in Barcelona, Spain, was also influenced by her parents who preferred Europe over the US because of the proximity and affordability. The tuition fee for her year-long course is approximately $28,500, with accommodation costing another $15,000. According to industry experts, annual tuition and living expenses for an MBA in a top US school could cost approximately $60,000.

Agarwal, who graduated in September 2018, says that she chose the Spanish business school because of its interesting subject combinations, despite knowing that it is difficult to get work permits and visa extensions in Spain. “Being in the Europe opens up opportunities across the EU, which eventually makes a permanent residence permit easier to come by,” she says. “I, for instance, landed a job as a business developer at Norwegian technology company Piql before the completion of my course. While I am based in Delhi for now, depending on my performance at work, I could relocate to any of Piql’s offices across Europe next year.”