As sales of electric vehicles are soaring, a number of models from carmakers like Toyota, Tesla and Mercedes-Benz, with solar panels are expected to arrive in dealerships in the coming months 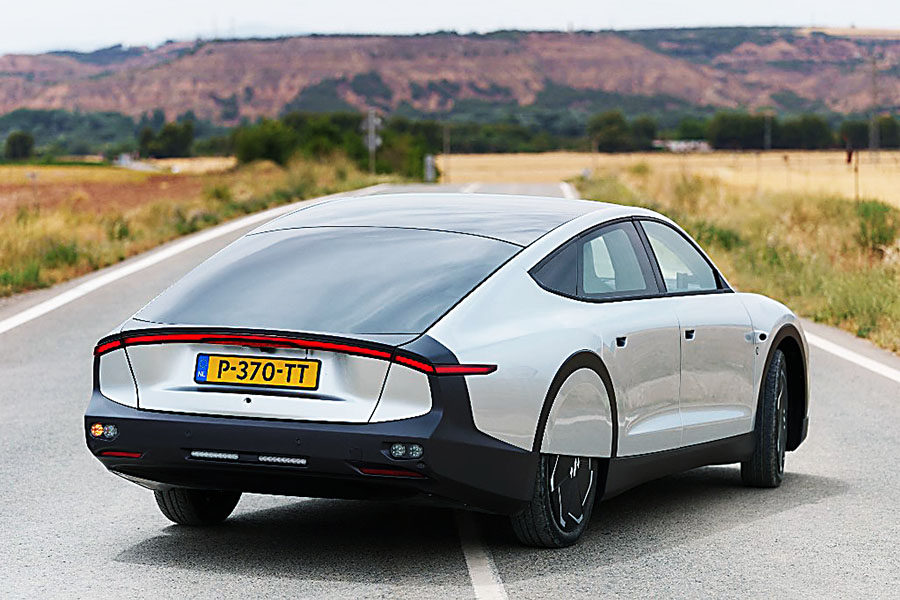 Paris, France: Startups and major carmakers are starting to incorporate solar panels on their electric vehicles, an addition that extends the range of the cars even if perpetual motion remains a dream.
As it rolls under the blistering sun of northern Spain, the Lightyear 0 generates enough electricity every day to drive 70 kilometers (43 miles) thanks to the five square metres of solar panels integrated into hood and roof.
The company was founded by young Dutch engineers who earned their spurs in running solar cars in races across the Australian desert.
Thanks to the drop in the price of solar panels, Lightyear is trying to incorporate them into road cars.
With its sleek, aerodynamic line and motors integrated into the wheels, the Lightyear 0 consumes less energy than electric SUVs.

Coupled with a battery that offers 625 kilometres per charge, the company says some customers who drive only short distances each day may only need to charge during the winter.
"The clock is ticking, we need to have sustainable cars as soon as possible," one of the founders, Lex Hoefsloot, told AFP.
"Charging points are still a big hurdle. If we don't need them, we can scale electric cars much quicker," he added.
Lightyear targeted the top-end of the market with the 0, with the 1,000 or so cars produced setting back buyers 250,000 euros, the equivalent of a Bentley.
The company hopes to launch a mass-market model with a price tag of 30,000 euros ($31,500) in 2024-2025.

As sales of electric vehicles are soaring, a number of models with solar panels are expected to arrive in dealerships in the coming months.
Also read: Is the new Nexon EV Max the game changer that Tata Motors needs to fuel India's EV transformation?
Toyota is now proposing solar panels as an option on Prius hybrids, as well as its first 100 percent electric vehicle, the BZ4X.
Tesla also plans to offer solar panels as an option on its pickup that is due to hit the road next year.
Mercedes equipped its luxurious EQXX with solar panels in the roof. The sedan, sleek like the Lightyear, has a range of 1,000 kilometres.
The cost of adding solar panels to cars has now fallen to several hundred dollars, a small amount compared to the overall cost of most models.
"Solar is now so inexpensive that even imperfectly sunny locations are worth putting solar on," said Gregory Nemet, a solar power expert at the University of Wisconsin-Madison.
"The value of putting solar on cars is that it can extend the range of the car," he said.
While it may not be able to fully charge the battery in a day, "it can provide enough energy to get home".
Or solar panels can help provide enough electricity to run the air conditioning in the vehicles, noted Gautham Ram Chandra Mouli, a specialist on electric mobility at Delft University in the Netherlands.

Drivers will likely want to run the air conditioning as they will have to park in the sun in order to get a good charge.
That could pose problems for some city drivers with parking spaces in garages.
The season is also an important factor. Drivers in northern Europe will get much less of a charge from integrated solar panels in the winter than during the summer.
The California startup Aptera, which has 25,000 orders, designed its futuristic three-wheeler to be highly efficient in order to get the most from solar power.
The two-seater vehicles, which should begin to be delivered to buyers this year, could get over 60 kilometres of travel from its solar panels.
Also read: In four to five years, 15% of our volumes to be fully electric cars: Audi India head
Depending on the model, which cost from $26,000 to $46,000, the cars can travel from 400 to 1,600 kilometres on a full battery charge.
German firm Sono Motors has taken a more classic approach with its compact-minivan Sion.
A boxy, black five-seater that screams family car, the Sion is completely covered in solar panels.
"We developed a technique that allows covering all the car" with solar panels, said Jona Christians, a co-founder of Sono Motors.
The first Sions should be delivered next year and the current pre-order price is 28,500 euros.
The firm already has 18,000 such pre-orders and hopes to be able to manufacture over a quarter-million vehicles this decade.
The Sion is also being designed to offer different functionalities from its battery, including powering other devices and charging other vehicles. It can even give power back to the grid.
The Dutch firm Squad Mobility is targeting a different market—what it calls sub(urban) mobility.
The Squad Solar City Car may resemble an enclosed golf cart, but the two- or four-seat vehicles can zip around fast enough and have enough room to make completing many urban errands convenient.
With the solar panels in the roof, the car can generate enough power to travel 20 kilometres per day in Europe.
The company says such microcars travel around 12 kilometres per day on average, meaning most users won't need to charge it daily.
"Solar panels will get more affordable, drivetrains will get better," said Squad Mobility's chief, Robert Hoevers.
"Sooner or later you'll drive everyday on solar."
By Taimaz SZIRNIKS
© Agence France-Presse