Terramation: The 'green' burial trend gripping the US 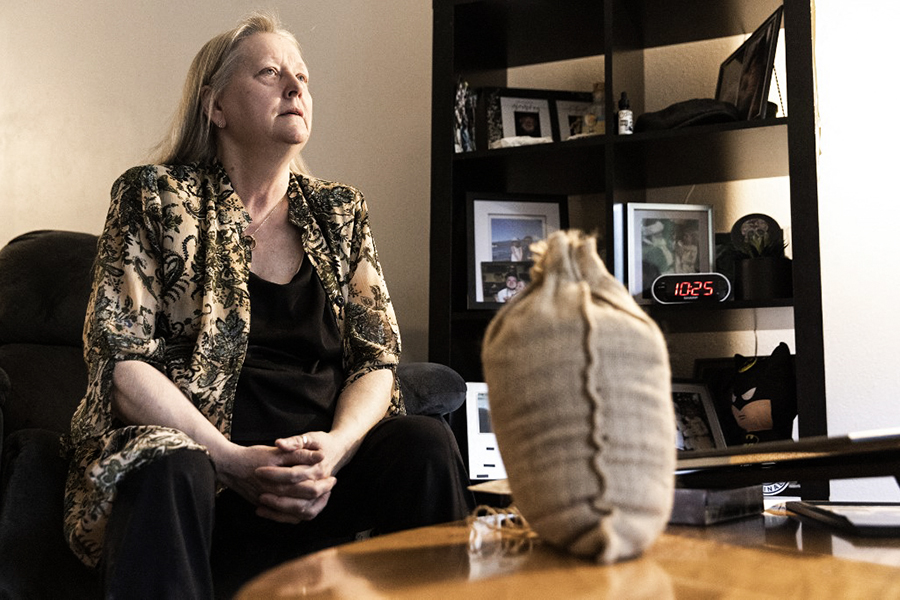 Cindy Armstrong is pictured with a bag containing the composted remains of her son Andrew Armstrong at her home in Covington, Washington on March 15, 2022. Armstrong recalled her son Andrew insisting on the so-called "terramation" process after the western state of Washington in 2019 became the first in the United States to make it a legal alternative to cremation. (Credit: Jason Redmond / AFP)

Kent, United States: A woodpecker settled on a branch overhead as Cindy Armstrong stood near a grouping of trees, gazing at a patch of soil that contained bits of her son's composted remains.
Armstrong is one of a growing number of Americans embracing environmentally low-impact burials for their loved ones.
Armstrong recalled that her son Andrew insisted on the so-called "terramation" process after the western state of Washington became the first in the United States to make the practice a legal alternative to cremation in 2019.
"I was mortified," she told AFP. "Now that I've gone through the process, I'm all for this. I will be terramated."

The composted remains of Andrew, who died from cancer last year at age 36, have joined remains of dozens of others on a hillside in the town of Kent, in the Seattle area, set aside as their resting place.
Thousands of Americans choose "green" burial — which eschews chemical embalming as well as materials like concrete or metal which come with climate-harming carbon footprints — each year.
"He wanted to give back to nature," Armstrong said on a recent March morning, with trees and plants taking root in the verdant, wet hillside.
The land is owned by Return Home, a startup that has performed 40 terramations since launching in the neighboring city of Auburn seven months ago.

"It's like these people are teaching us to die better," Return Home founder and chief Micah Truman said as he showed AFP a warehouse-sized room with racks of metal containers referred to as "vessels," which hold remains during the 60-day, sealed decomposition process.
The space was brightly lit and upbeat music played. Loved ones who visit during those 60 days can pick songs celebrating the lives of those they have lost.
Bodies in vessels are not embalmed, and family members are invited to add flowers or compostable mementos to the straw and other natural ingredients used in the process.
The amount of organic material added to the vessels to help in the composting process is about triple the body weight of the human remains inside, resulting in hundreds of pounds of compost being produced.
No enzymes are added, the company said.
Sensors tracking moisture, temperature and air flow synched with a computer to optimize conditions for decomposition.
Halfway through the process, bones are removed and ground into fine pieces before being put back in the vessel to finish composting.
The result looks and feels like ordinary mulch.
Families can take as much or as little as they want, with the rest spread at "The Woodland" in Kent.
Local zoning rules restrict the land — which was once strewn with ruined cars, some scarred by bullets — from ever being built on.

Body composting is part of an eco-friendly funeral trend gaining momentum around the world, according to Green Burial Council president Edward Bixby.
"Basically, it's going back to the earth as we came; dust to dust," said Bixby, who opened his first Destination Destiny natural burial cemetery five years ago in New Jersey and has expanded to ten US states.
The council has more than 400 members, some outside the United States, according to Bixby.
A single cremation, according to the Green Burial Council, burns about as much fuel as a full tank of a large sport utility vehicle.
Return Home body composting is priced at $5,000, on par with cremation. Traditional funerals can cost double or triple that.
Other green burial options include simply wrapping a body in a biodegradable shroud or putting it in a wooden box and burying it.
Silicon Valley-based Coeio sells an Infinity Burial Suit that contains mushroom mycelium in a recipe intended to "neutralize toxins found in the body and transfer nutrients to plant life."
Green burials come with a natural approach to death itself.
Loved ones can be involved with preparing bodies for burial, seeing the departed as being a part of life that continues on.
"Horror movies and things like that have made people afraid of death and dying," Bixby said.
"We have always had the ability to care for our loved ones in death, we just lost touch with it."
By Glenn CHAPMAN
© Agence France-Presse

Tweets by @forbesindia
US says Myanmar committed genocide against Rohingyas
Umesh Sachdev on explaining 'unicorn status' to his daughter, IPO plans, and the billion-dollar ambition at Uniphore