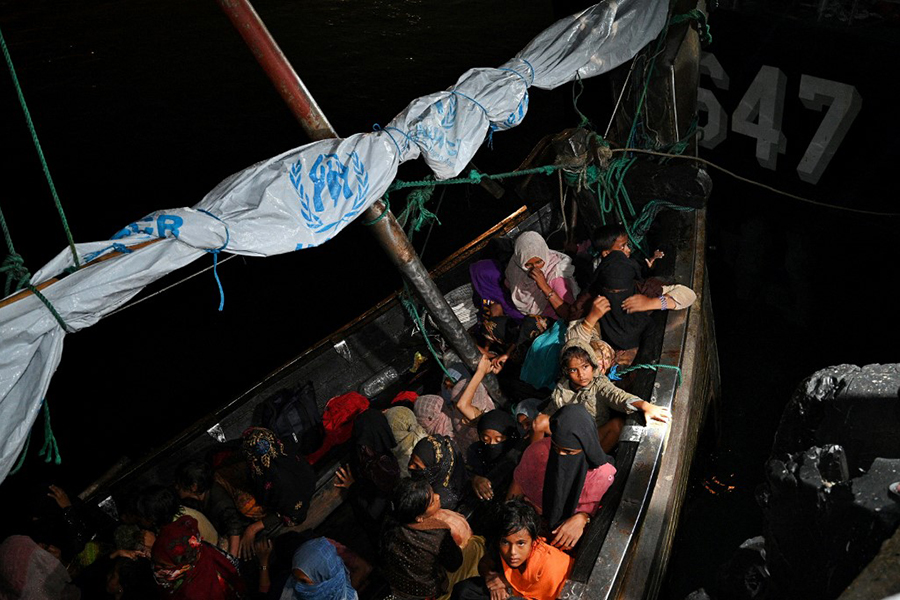 Rohingya refugees sit on a wooden boat after their were rescued by Indonesia's navy in the waters off Bireuen, upon their arrival to Krueng Geukueh port in Lhokseumawe, on the north coast of Aceh province on December 31, 2021. - Indonesia's navy rescued more than 100 Rohingya migrants traveling in a wooden boat, bringing them to safety early December 31, 2021 morning following pressure from locals. (Credit: CHAIDEER MAHYUDDIN / AFP)

Washington, United States: The US has determined that the violence against the Rohingya minority committed by Myanmar's military amounted to genocide and crimes against humanity, an official told AFP Sunday.
Hundreds of thousands of the mostly Muslim Rohingya community have fled Buddhist-majority Myanmar since 2017 after a military crackdown that is now the subject of a genocide case at the United Nations' highest court in The Hague.
US Secretary of State Antony Blinken is due to officially announce the decision to designate that crackdown a genocide in remarks at the Holocaust Museum in Washington on Monday, where an exhibit on "Burma's Path to Genocide" — using a former name for the country — is on display.

Blinken said in December last year during a visit to Malaysia that the United States was looking "very actively" at whether the treatment of the Rohingya might "constitute genocide."
The State Department released a report in 2018 that detailed violence against the Rohingya in western Rakhine state as "extreme, large-scale, widespread, and seemingly geared toward both terrorizing the population and driving out the Rohingya residents."
"I'll never forget the painful stories I heard in 2017 from members of the Rohingya community in Burma and Bangladesh — stories of violence and crimes against humanity," US senator from Oregon Jeff Merkley tweeted Sunday evening about news of the genocide designation.
"Good to see the admin take this overdue step to hold this brutal regime accountable, which I've pushed for years," he said.
Around 850,000 Rohingya are languishing in camps in neighboring Bangladesh, recounting mass killings and rape, while another 600,000 members of the community remain in Rakhine where they report widespread oppression.
A legal designation of genocide — defined by the UN as acts "committed with intent to destroy, in whole or part, a national, ethnical, racial or religious group" — could be followed by further sanctions and limits on aid, among other penalties against the already-isolated military junta, the New York Times reported.
The United States slapped a series of sanctions on the country's leaders and, like other Western nations, has long restricted weapons to its armed forces, which even before the junta took power faced allegations of crimes against humanity for the brutal campaign against the Rohingya.
The case opened against Myanmar by The Gambia at the International Court of Justice in 2019 has been complicated by last year's coup that ousted civilian leader Aung San Suu Kyi and her government, triggering mass protests and a bloody crackdown.
The Nobel peace laureate, who faced criticism from rights groups for her involvement in the Rohingya case, is now under house arrest and on trial by the same generals she defended at The Hague.
The administration of President Barack Obama had pumped large amounts of political capital into Myanmar's transition to a fledgling democracy, offering financial help and diplomatic support.
But the US also made clear its discomfort at ongoing violence between Myanmar's army and ethnic rebels as well as religious violence and discriminatory policies particularly targeting the Rohingya.
© Agence France-Presse

Tweets by @forbesindia
The internet is awash in positive product ratings. Here's how to decipher the good from the great
Terramation: The 'green' burial trend gripping the US