The Pulitzer winner that emerged out of a time of quietness

Inspired by the silence of days spent in lockdown, Raven Chacon, member of the Navajo Nation, began writing "Voiceless Mass," a 16-minute work for ensemble and pipe organ. It won the Pulitzer in Music 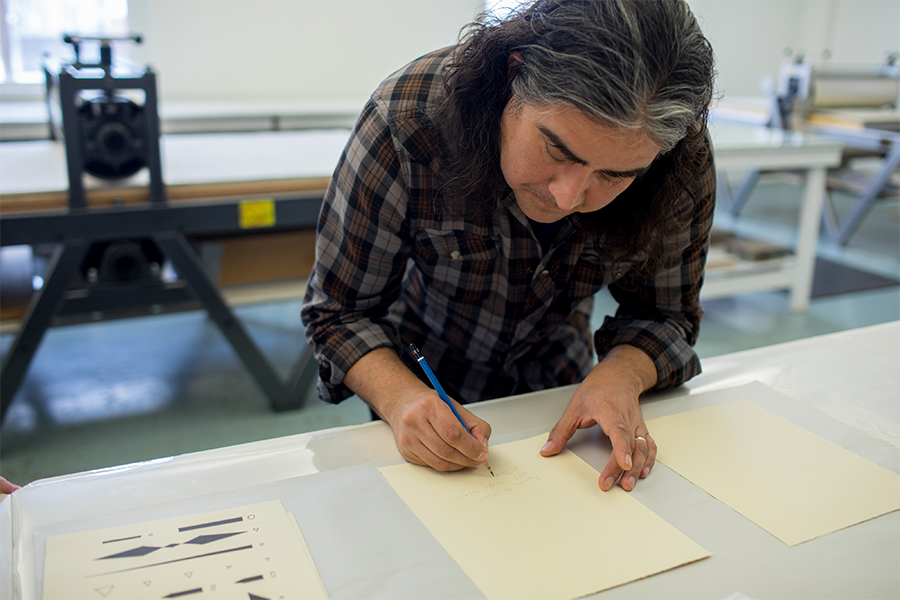 The composer and artist Raven Chacon, a member of the Navajo Nation, at Crow’s Shadow Institute for the Arts, in Pendleton, Ore., Feb. 17, 2019. Chacon’s “Voiceless Mass,” a work for ensemble and pipe organ that “evokes the weight of history in a church setting,” won the Pulitzer Prize in Music on Monday, May 9. (Credits: Celeste Noche/The New York Times)

At the height of the coronavirus pandemic, when the world around him turned quiet and still, composer Raven Chacon went to work.
Inspired by the silence of days spent in lockdown, he began writing “Voiceless Mass,” a 16-minute work for ensemble and pipe organ. Chacon, 44, a member of the Navajo Nation who lives in Albuquerque, New Mexico, set out to use the sounds of the organ, accompanied by winds, strings and percussion, to explore themes of power and oppression.
“During the pandemic, we were able to focus on some of the cries of people who were feeling injustices around them,” he said in an interview. “Lockdown was this time of quietness where there was an opportunity for those sounds and cries to emerge.”
On Monday, “Voiceless Mass” was awarded the Pulitzer Prize in Music. It was an unexpected honor for an artist who has worked across genres — music, video, printmaking — to shine light on the struggles facing Indigenous people.

Chacon said he did not realize he had won the prize until shortly after the announcement Monday, when friends started texting him.
“Apparently they don’t call you,” he said.
“Voiceless Mass” had its premiere on Nov. 21, 2021, at the annual Thanksgiving concert of Present Music, an ensemble dedicated to contemporary music. It was commissioned by the ensemble and by the Wisconsin Conference of the United Church of Christ and Plymouth Church in the United Church of Christ.
Chacon has described the work as an exploration of the “spaces in which we gather, the history of access of these spaces, and the land upon which these buildings sit.” He wrote “Voiceless Mass” specifically for the Nichols & Simpson organ at the Cathedral of St. John the Evangelist in Milwaukee.
“In exploiting the architecture of the cathedral, ‘Voiceless Mass’ considers the futility of giving voice to the voiceless, when ceding space is never an option for those in power,” Chacon has said.
The Pulitzer committee praised the piece as a “mesmerizing, original work for organ and ensemble that evokes the weight of history in a church setting, a concentrated and powerful musical expression with a haunting visceral impact.”
It is the latest in a series of works by Chacon exploring the injustices suffered by Indigenous people. He has produced graphic scores dedicated to Indigenous female composers; recordings of silent standoffs between Indigenous women and the police during protests near the Standing Rock Sioux Reservation, in 2016; and a video installation, filmed on Navajo, Cherokee and Seminole lands, featuring women singing the stories of sites where massacres or removals have taken place.
He also wrote the music, along with Du Yun, for the opera “Sweet Land,” a meditation on colonialism that premiered in 2020.
Chacon said he hoped the prize would help give “Voiceless Mass” a broader audience.
“I hope it gets performed more,” he said. “It’s always been a challenge to make this kind of work accessible to people who can’t enter these spaces, either because of monetary barriers, or just because they feel they aren’t the audience for classical music.”

Tweets by @forbesindia
Which countries have the priciest passports?
Bladder Cancer: The things you should know