As residential real estate remains in a slump year after year, global real estate funds are scrambling for quality commercial spaces in India, which are in short supply 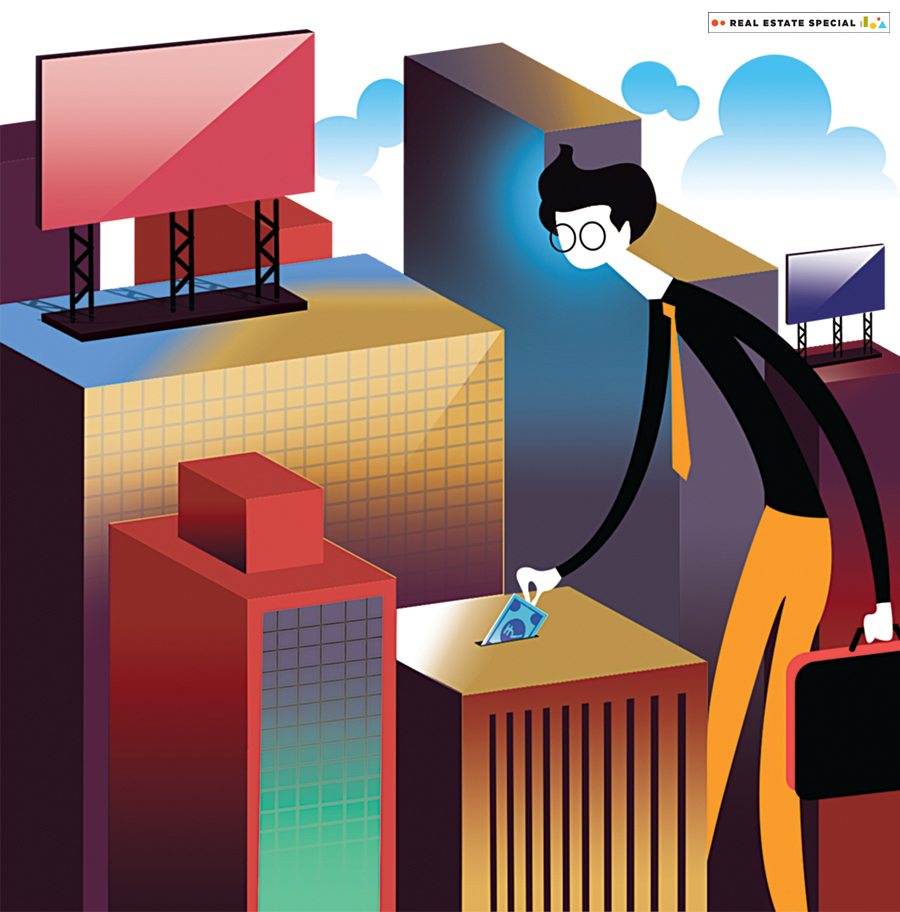 In 2007, capital was gushing from all corners of the world into India, especially into real estate. Amid this frenetic activity, home-grown real estate fund IL&FS Private Equity—the only listed private equity (PE) fund in India—tied up with Milestone Capital to raise a commercial real estate fund called IL&FS Milestone Fund I. By March 31, 2008, it raised ₹516 crore ($117 million), including co-investment vehicles to acquire commercial real estate projects such as offices, malls and warehouses. By December 2014, it had exits worth ₹616.52 crore.

After the death of Milestone’s founder Ved Prakash Arya in an accident in 2011, the fund ran into rough weather, as did India’s real estate ecosystem; while the fund could not keep up with the times, the world too had changed considerably.

After the collapse of Lehman Brothers in 2008, real estate sales slowed to a trickle and most active global funds returned home. Domestic realty funds were left to fend for themselves through mezzanine structured deals. Capital wasn’t a friend for realtors anymore.

Though the market remained sluggish for the next three years, a global PE giant sat tight through it all, observing the market, scouting deals but not offering any cheque, not yet.

It was only in 2011 that Tuhin Parikh, senior managing director at Blackstone Group LP, decided it was time to buy an office park, leaving real estate consultants and fund managers surprised. Blackstone acquired a substantial stake in the Bengaluru-headquartered Manyata Business Park for an undisclosed amount from Embassy Property Developments, which became Blackstone’s preferred development partner.

Parikh adds, “In the good old days of real estate, access to land and other things were considered the key to value creation but the reality is that the business has become transparent, and access to capital has become important for all the players. Tenants are also becoming discerning to who their landlord is and the backend management and maintenance that office owners bring in to play is critical."

Till date, the fund has deployed $5.4 billion in commercial real estate in India, of which $4 billion was for acquiring Grade-A office space in  top cities. Blackstone owns 22 office parks, and is the largest landlord in India.

In 2015, Blackstone acquired 247 Park, an office space in Mumbai of which 74 percent was owned by IL&FS Milestone funds. The 1.1 million sq ft office space, built with ₹775 crore, was sold at an enterprise valuation of ₹1,060 crore. The IL&FS Milestone Fund I and II have given gross returns of 8 percent and 11 percent respectively.

“The capital efficiency is higher if  you invest in a commercial office park; repatriation can happen whenever the funds are seeking an exit,” says Shobhit Agarwal, managing director and CEO at realty consultancy Anarock Capital. “There is enough demand for office space and most funds that have exited have made returns in high teens in rupee terms,”

Canadian firm Brookfield Asset Management entered India in 2014 by buying Alternative Investment Market (AIM)-listed firm Unitech Corporate Parks. In 2016, in a billion-dollar deal, it acquired the commercial office assets of Hiranandani Group in Mumbai. It now owns nearly 30 million sq ft of assets in India and has deployed more than $3 billion in offices, including in Gurugram, Noida, Kolkata, Mumbai and Pune.

“We have brought in our global model to India wherein we are owner, manager and developer of assets and we have quadrupled our portfolio since we made our first investment. Long-term ownership is different from development since each of these requires different cost of capitals,” says Ankur Gupta, managing director of Brookfield’s property group and head of real estate business in India.

In the last 10 years, commercial office spaces have seen investments of nearly $13 billion, led by Blackstone, Brookfield Asset Management, GIC Pte Ltd, Ascendas-Singbridge Group and Xander Investment Management Pte Ltd. According to a March report by Anarock Capital, investors from the US, Canada and Singapore contribute nearly 98 percent of foreign REPE investments in India. Delhi-NCR, Mumbai, Bengaluru, Chennai, Hyderabad, Pune and Kolkata are the forerunners for deployment of this capital in office parks. 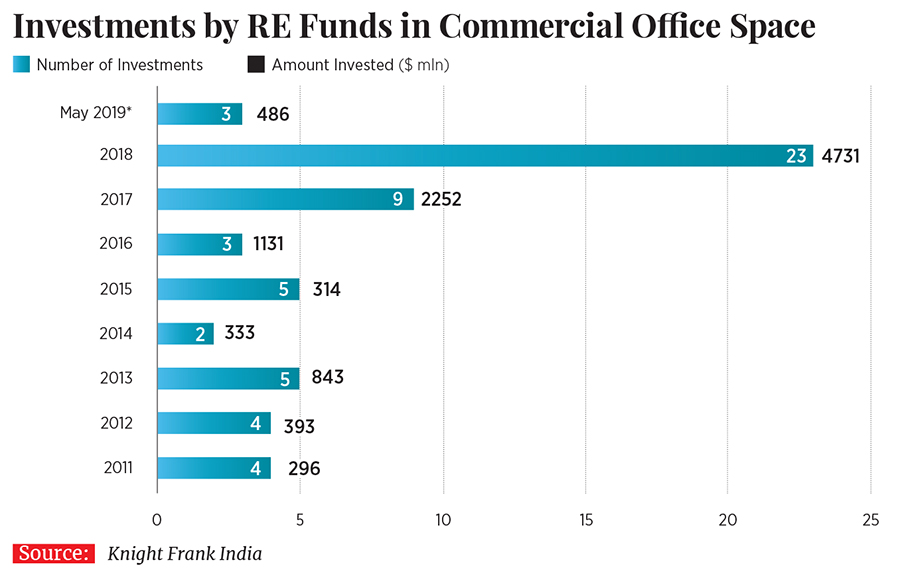 The Anarock Capital report adds that over the past four years, commercial assets became the top preference of REPE investors, attracting more than 70 percent of investments in 2018 compared to 33 percent in 2015. In contrast, residential space saw its share fall from 53 percent in 2015 to just 7 percent in 2018.

It is over the last few years that some of the largest deals in terms of value have been struck. For example, Singapore government’s sovereign arm GIC Pte Ltd invested nearly ₹11,900 crore in a stake in DLF CyberCity Developers, the office portfolio of DLF Ltd. 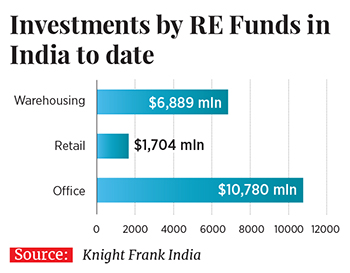 A few months ago The Xander Group signed a $350-million deal to buy 5.5 million sq ft in South India and are buying another 1.1 million sq ft in western India, says Rohan Sikri, senior partner at Xander, which has invested about $3.7 billion in India. “About $1 billion is in the commercial office sector. We have acquired nearly 15 million sq ft across the top six cities.”

While most funds are still in the buying mode, Xander has managed to exit through secondary sales. “Of our opportunistic investments, nearly $250 million are now fully exited, with $475 million realised for investors,” adds Sikri. The fund has exited its commercial office development investments made between 2006 and 2011 in Mumbai, Pune and NCR.

With capital comes competition. As Chacko explains, “We have seen an increase in valuations as well, though concentrated in the key micro markets. The valuations are fuelled by inequity between the high demand for quality infrastructure [with good building quality, amenities and facility management] and a relatively low supply of such spaces. This has meant an increase in absorption and leasing volumes.”

Ascendas-Singbridge was bought out by CapitaLand earlier this year. Ascendas India Trust owns seven IT parks and six modern warehouses, of around 12.6 million sq ft, across various cities.

Ascendas-Singbridge owns and operates nearly 17 million sq ft across Bengaluru, Chennai, Hyderabad, Pune, Mumbai and Gurugram and plans to double its portfolio in the next five years. It is also actively signing forward purchase agreements with tenants where it buys an asset for a pre-agreed valuation and provides the developer with construction funding to complete the project.

“In the key micro markets of the top cities in India, vacancy is in single digits. For example, in Hyderabad demand has picked up significantly and we are focussed on adding to our portfolio there,” says Srivastava. “The merger with CapitaLand is complementary to the Ascendas-Singbridge group. With their expertise in retail, hospitality and mixed-use developments, along with high focus on leveraging the rapidly growing demand in India, we are bullish on strengthening our presence in India.”

Sikri concurs. He believes the Indian office space segment is an attractive market when it comes to risk-adjusted returns, compared to other emerging markets.

“There is no doubt that valuation metrics for stabilised Grade-A commercial assets have improved over the last few years. Since we do not rely on market or interest rate cycles for our returns, we are focussed on value-adding to underperforming assets,” he says.

While office remains the core of the business, funds are branching out into warehouses, co-working spaces and malls. Xander has a retail platform called Virtuous Retail, and is looking at industrial assets; it has branched out with its co-working platform of about 5 lakh sq ft in five centres.

Ascendas-Singbridge runs a $300 million logistics platform with Temasek in India, which has acquired two projects in Chennai and is scouting for more deals.

Brookfield has recently acquired Hotel Leela Venture, to add to its commercial portfolio. “We will bring in capital and grow and expand the luxury hotel brand. We believe with strong capital behind it, the brand will grow. We are nimble and we will be able to expand our hospitality business,” says Gupta.

Even Blackstone is looking to chase warehousing deals in the coming year. But it’s the firm’s real estate investment trust (Reit) that has been the talk of the town.  Fund managers have their eyes on the performance of Embassy Office Parks, which it listed this April. “Launching a Reit is a six- to nine-month process. Everyone is eagerly looking out for Blackstone’s Reit as they are yet to provide dividends. Investors have taken a bet on the product, but they have not yet seen a full cycle, which will happen in the next two quarters when dividends will be paid and there will be a surge in listings,” explains Agarwal.

Until then, the big boys of REPE are busy assessing the next available office in the country.

Tweets by @forbesindia
KKR: Build up rather than break up
Can the kombucha billionaire survive the rush of competition?