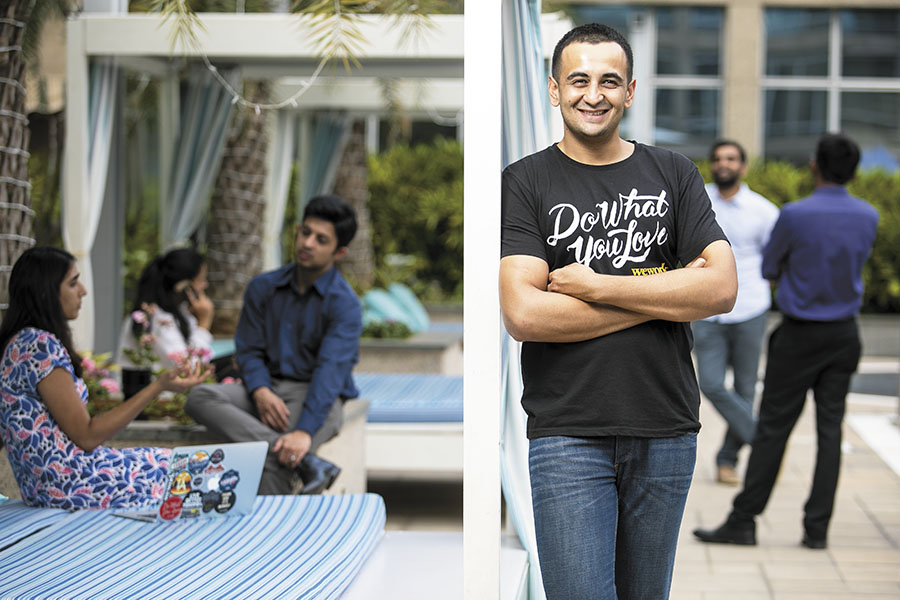 Classified ads portal OLX has a four-member sales team operating out of Mumbai’s business district of Lower Parel. The company pays a rent of Rs 48,000 to Rs 50,000 per month for the work space, averaging about Rs 12,000 per person. For the premium piece of real estate that Lower Parel is, OLX would typically have had to pay anywhere between Rs 12,000 to Rs 18,000 per month for one workstation (of approximately 100 square feet) plus a security deposit equivalent to six to 12 months’ rent. The expenses would have further shot up in conventional leasing as landlords don’t offer floor plates less than 1,000 to 1,200 square feet, no matter how small the team. So, how has OLX gotten off this easy? Because it is merely one of the many companies that shares Awfis, a two-storied co-working space that allows offices to enjoy a top location, and a range of amenities without having to pay through their noses.

Welcome to the world of shared office spaces in which a co-working company takes lease of a larger space, re-designs it and then rents out smaller plates and single desks to ‘members’, as tenants are called. Says Ramesh Nair, CEO and country head for property consultancy Jones Lang LaSalle (JLL) in India, “Companies can save as much as 15 to 20 percent by working in a co-working space.”

But it’s not just the cost benefits that make co-working an attractive proposition. There’s the convenience factor, where members needn’t worry about fitting out the workplace, buying furniture or getting an internet connection, as they would under a traditional lease. Desk space can easily be reserved through an app, giving members all the perks of a top-class office facility, including Wi-Fi connectivity, conference rooms, storage units, informal lounges and pantry facilities, as well as not-so-traditional offerings like beer on tap, discounts on Microsoft Office products and even yoga classes.

The concept of shared office spaces is not new. Established players, like the London-listed Regus, which provides fully serviced office spaces and posted revenues of about $1.3 billion in the half year ended June 2016, have been in the business for almost three decades now. So what do they do that is different from co-working?

A key point of difference is that most co-working spaces appoint ‘culture managers’ or ‘hosts’ within each space whose job is to create opportunities for collaboration—both formal, like talks by renowned speakers and informal, like happy-hour Thursdays. It is through such active efforts that members are able to build sustainable networks with one another. Ole Ruch, WeWork’s managing director for the Asia Pacific region, points out that because of their “focus on creating a community”, around 70 percent of their members collaborate, while 50 percent actually end up doing business with each other.

That’s the real identity of a co-working space, feels Adam Neumann, the Israel-born co-founder of global co-working giant WeWork. Despite the multiple hats it wears (of a real estate, tech and services firm), a co-working venture, says Neumann, is actually a “community company”. For instance, WeWork’s 90,000-strong member network, spread across 158 workplaces in 15 countries, is encouraged to share ideas and draw on each other’s strengths. 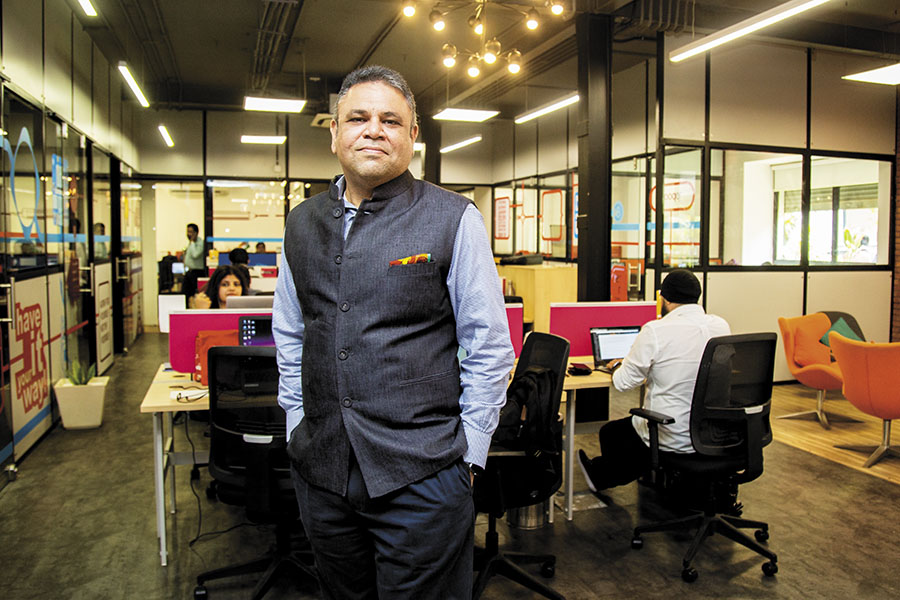 Last valued at $16 billion, WeWork tied up with Bengaluru-based property developer Jitendra Virwani’s Embassy group last February. Their first India centre is set to open in an Embassy-owned building in Bengaluru’s prime Residency Road area, in the second quarter of this year. At 1.4 lakh square feet, the space is expected to house 1,800 members. A second centre in Mumbai’s business district Bandra Kurla Complex is to follow.

“Typically, WeWork accommodates around 2,000 members in one space, so, say, your business needs a graphic designer. The chances of you finding one from that pool are very high,” says Karan, Virwani’s son and the driving force behind WeWork’s foray into India.

The 25-year-old Karan Virwani spent two years understanding his father’s core real estate business, when it struck him that the office space market dynamics were fast changing, as were the needs of tenants. “No one was providing space to meet the increasing demands of smaller companies. Everyone was offering large floor plates (upwards of 5,000 sq ft),” he says. Fuelling this demand is the rise of the ‘gig’ economy, characterised by freelance or contractual work, as well as the surge in startups.

Like Virwani, Sidharth Menda, a third-generation scion of the Bengaluru-based realtors RMZ Corp, set up CoWrks last September to plug this gap. His logic: The nature of work has changed and so must workplaces. “While baby boomers valued privacy, Millennials value networks. Driven by a culture of sharing on social media, they value meaningful connections with others,” says Menda. As a real estate player first, and now a co-working operator, the 27-year-old says he is able to draw on not just a solid understanding of the real estate market, but also years of insights into workplace designs that enable people to function most productively. CoWrks currently has two fully operational centres in Bengaluru, and two more in the pipeline in Mumbai and Delhi-NCR respectively.

Like Menda and Virwani, a number of startups too have sniffed opportunity, so much so that there are over a 100 co-working space providers in India today, according to JLL. While these spaces comprise a fraction of the country’s total commercial real estate market, they’re fast growing in popularity. According to Amit Ramani, founder and CEO of Awfis, a prominent player on the scene, of the total 500 million sq ft of commercial Grade A and Grade B space in India, co-working and business centres comprise 0.4 to 0.5 percent. Over the next three years, he expects this to grow to about 2 percent.

However, Harsh Lambah, the country manager for Regus in India, believes that co-working has suddenly become a buzzword.

“We’ve been at the forefront of the co-working and flexible working industry for the last 25 years. It’s just that over the last six to eight months co-working has become a big buzz. But we’re happy. It will grow the category and there will be focus on who the big industry players are,” he says.

Meanwhile, proponents of the co-working craze believe that this is a “mega-trend”, as Anand Lunia, founder of early stage venture fund India Quotient, puts it. For startups in need of flexibility, the long leases and large floor plates offered by traditional landlords are impractical. “Startups or SMEs don’t think in square feet. They think in terms of desks. If they have five people, they need five desks. If they grow or shrink their business, we can easily adapt to their requirements,” says Ramani, who boasts of hosting over 220 companies in 20 Awfis centres spread across seven cities. 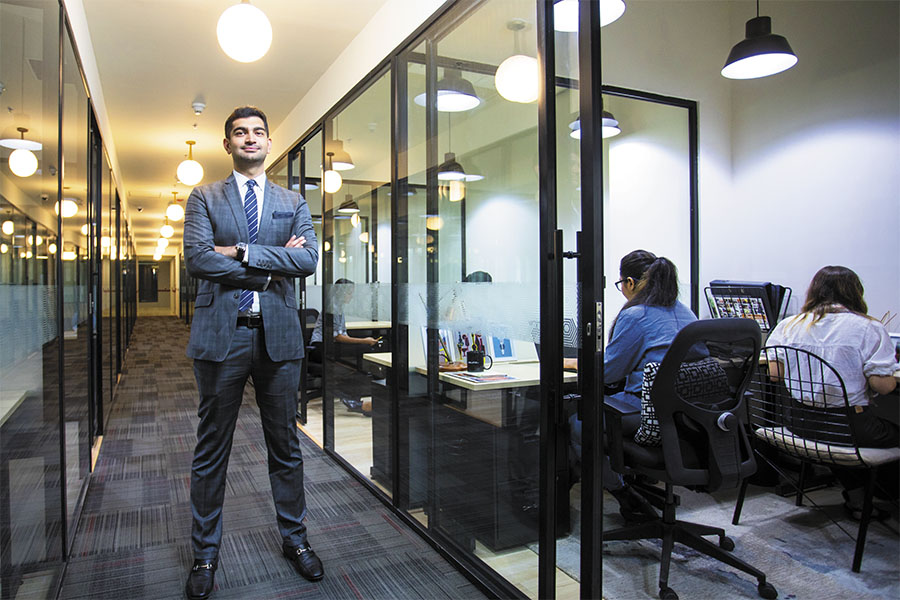 Larger companies looking for temporary space also see merit in co-working spaces. As do an increasing number of multi-national companies like consulting firm Accenture, that Awfis counts as a client, or the Boston Consulting Group, that works out of a CoWrks facility in Bengaluru. The desire to adopt a “startup-like culture” and thereby foster innovation is a key driver, points out Nair.

The concept of co-working might have caught on, but its business model is inherently risky. While a co-working company commits itself to a long-term lease with a landlord, of typically seven to eight years, its members only commit to monthly contracts. “You can’t have fluctuating revenue at one end and fixed rental at the other. It’s not a sustainable model,” says India Quotient’s Lunia.

Globally, WeWork has thus far taken this risk because when the times are good and demand is high, the margins can be as high as a reported 45 percent.

Neumann claims business is good in bad times too as that’s when laid off employees are looking for alternate spaces to work out of. In fact, WeWork was set up in 2010, when the global economy was still reeling from the after-effects of the US housing market crash in 2008 and the financial downturn that followed. That wasn’t the case with Regus though, which filed for Chapter 11 bankruptcy protection for its US business in 2003 after the dotcom bubble burst. (The business has since recovered.)

In India, however, WeWork has struck an unusual deal. Virwani will lease out the office space—from Embassy as well as other developers—and invest in re-designing it, while WeWork will lend its brand, ethos and expertise for a fixed management fee and a share of the profits. The upside of such a model is lower, but so is the risk.

“They [Embassy] come with incredible in-market experience, which is amazing to have as we enter a new market,” says Ruch of WeWork Asia Pacific. On Virwani’s part, he says that even though capex is the biggest spend for them, the Embassy group’s deep understanding of the Indian real estate market and their relationship with landlords will enable them to “get the best deals”.

CoWrks, aside from leveraging its own properties to build its co-working spaces, has also entered into revenue sharing deals with third party landlords to mitigate the risks of the business. Awfis, too, has a “managed aggregation” model wherein some properties are plain vanilla leases while others are revenue share deals. Diversifying the client base is yet another way to offset risk. According to Menda, CoWrks typically limits its exposure to startups whose churn tends to be higher. Instead, SMEs and MNCs together account for about 80 percent of their members while early-stage startups comprise 10 to 15 percent. The rest are freelancers.

Does co-working signal the end of the conventional office? Not just yet. While JLL’s Nair is “very bullish” about the co-working market, he points out that it is still very nascent. Landlords will take a while to warm up to revenue sharing deals, he says, and until that happens it’s difficult for a standalone startup—without the financial muscle and wherewithal that real estate players like Virwani and Menda have—to survive. Consolidation will occur and the industry will see four or five players emerge, says Nair. “Eventually, only the big boys will remain.”