India can be a beacon of investment opportunity: Arvind Subramanian 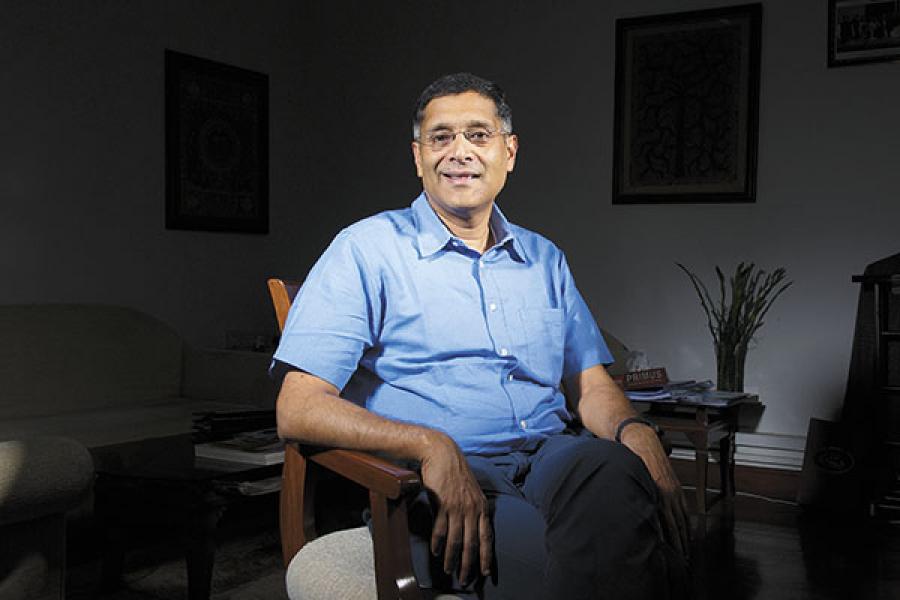 Image: Amit Verma
Arvind Subramanian is on the threshold of completing a year as CEA

The Indian economy is showing mixed signals but 8 percent GDP growth is attainable, believes Chief Economic Advisor (CEA) Arvind Subramanian, who is on the threshold of completing his first year in office. In a freewheeling chat with Forbes India, he spoke about the recent rate cut by the Reserve Bank of India (RBI), challenges facing the Indian economy, the pace of reforms, global economic pressures and his experience of working in the government. Excerpts:

Q. Did you expect a 50 basis points rate cut from the RBI?
We were all hoping that there would be monetary policy support, but it was up to the RBI to decide. It was very good news. The fact that inflation has come under control means that monetary policy can provide more support to the economy and it [the rate cut] was consistent with that.

Q. A critical factor for the interest rate cut to have a fully beneficial impact on the economy is the ability of the government to meet its fiscal targets. How confident are you on this front?
We are very confident and committed, and I think that both are important. Confidence is one thing, but if things slip up, we have to be committed to meet the fiscal target and take all actions possible. The revenue secretary [Hasmukh Adhia] has said that direct tax revenues have grown by 12 percent, which surprised me on the upside. And indirect taxes have grown by 36.5 percent. So essentially he expects the revenue shortfall to be relatively small.

Q. Around 5 percent shortfall…
Yes, so indirect tax revenues have performed much better than we budgeted, so we have some cushioning there. And with that, we hope to meet the target for this year.

Q. Disinvestment, however, has not met the expected target.
Yes and the finance minister [Arun Jaitley] has said that we will do whatever we can. It is a challenging market. Commodity prices have come down and the world economy is slowing. It is a difficult job, but we still have six months left and there is a plan to sell as much as possible. We hope we get as close to the target as possible.

Q. The NDA government has been talking about reforms. However, key legislations like the Land Bill and Goods and Services Tax (GST) have run into a deadlock.
On the land [issue], as the finance minister said, the onus is going to be more on the states and perhaps, they would be in a better position to try and see the best way forward. On GST, the FM has again said that they will do whatever is possible to get it implemented soon. So the commitment to GST is still very strong and now it is a matter of securing the political agreement to push this forward because the government is committed to GST reform.

Q. At this point, would you advise the government to target some low-hanging fruits till there is political consensus on big reforms?
Low-hanging and high-hanging are ultimately political judgment calls. As CEA, my advice would be to say what is important and what needs to be done. There is a reform agenda, lots of very important items such as public investment, addressing tax concerns, GST and addressing the problems of power distribution companies... all these are up there and need to be implemented.

Q. We hear that the government is considering to put the onus on states to restructure the debts of power distribution companies (discoms).
We do not know the details yet; they will come out. But remember this is a state subject and states have to be involved closely in implementing this. So in that sense, the Centre can use whatever carrots and sticks it has. But it has to be state-led and that is what it is going to be. The fact that the government is paying a lot of attention [to discoms] means that it is high priority.

Q. Where do you see GDP growth next fiscal?
It’s a bit early to comment on the next fiscal. In this fiscal, the economy is sending many encouraging signals. Revenue growth is buoyant, real credit is picking up, but mixed signals are coming from exports and private investments. As of now, I am hoping we get close to the forecast of 8 percent.

Q. Do you see global developments such as weakness in the Chinese economy coming in the way of India’s growth acceleration?
The world has to get used to a new growth trajectory for China, which is in the 5-7 percent range and not the 10.5 percent levels that China has posted for over a decade. I think it is going to affect our exports because China is a big economy. On the other hand, it also means that it will pose challenges for specific sectors of the Indian economy such as steel. But there are also opportunities from this. It is not that we want to profit from the slowdown in other countries, but it does open up some opportunities. For example, we are in for a regime of soft oil prices and that will give us a cushion macro-economically and that is good. I like to see what is happening in the whole commodity price decline as an opportunity to build infrastructure because many of these like coal, steel, cement are used by the infrastructure sector and this is an opportunity for us. Also, now India is going to be a contributor to world growth. So I think if we can continue with our reforms effort, we can distinguish ourselves as an emerging market that has much better fundamentals. We can be both a haven of stability and a beacon of investment opportunity in this new world.

Q. It is critical to kickstart domestic consumption, as this will go a long way in absorbing the excess capacity in the system and set the stage for private sector investment…
I think the big challenge is private investment. But remember that it is partly a legacy issue, the overhang of debt and over indebtedness of what happened during the boom years. We are still trying to work that off. I think our institutional mechanisms for resolving that are not as robust as they should be, so that is taking time. And that is to some extent holding back the economy.

Q. Are you still worried about the deflationary conditions in the Indian economy?
I meant that as a warning about how rapidly we were facing disinflationary pressures in the Indian economy. I think that some of it is good [as] you want inflation to come down. But if it happens too rapidly and too much, you can get other challenges. If normal GDP slows down, the fiscal target will be affected.

Prices being low also mean that agricultural incomes are affected. So we need to be watchful for signs of anything that slows down economic activity too much or brings inflationary pressures down so much that it can be a problem.

So far, it has been good because it has allowed the Reserve Bank to cut interest rates but we need to be watchful in terms of the implications for the fiscal situation.

Q. There was a currency war scare. Where do you see the rupee settling down?
The honest answer is that nobody knows where the rupee will settle down. One should never forecast oil prices and the exchange rate. The broad aim of policy should be to keep the exchange rate competitive. That is the key thing, especially at a time when the world economy is slowing and countries themselves are following competitive exchange rates. I think we need to be watchful and maintain a competitive currency. Now, whether that is 65 or 70, remains to be seen.

Q. State-run banks are bogged down by the problem of non-performing assets (NPAs).
The government is trying to unblock as many projects as possible because a lot of capital value is locked into these things. Discoms and steel is a similar thing. We are recapitalising banks, improving public sector governance of the banks and addressing the corporate balance sheet problem. All this has to be done together and then we will see some kind of improvement in the NPA situation.

Q. Do you expect more rate cuts going forward?
The RBI has said that it would maintain an accommodative stance so I think it would be data-driven. It will depend on where the prices and economy head and also the global environment. Let us wait and watch.

Q. You have been optimistic about this government but it has failed to live up to its black money retrieval claims.
Yes, there is a fiscal thing. We should certainly try to bring as much revenue into the government. For me, what is also important is to see how we can address the underlying conditions that give rise to black money. [Bringing black money back] serves economic and political purposes and also serves a philosophical retribution against those who have evaded. The other problem is also important—why this happens in the first place.

Q. It is going to be a year since you took charge as CEA. How has your experience been so far?
My experience has been fantastic. It has been the dream job of my life and it has lived up to that and more. I have been surprised on the upside. It is a great time [and] it is a great situation. I have a fantastic team and bosses. There are so many issues that one can contribute to.

I like to say that never underestimate the power of good analysis in changing the world. I am delighted to have the opportunity.

Q. Your predecessor (Raghuram Rajan) had quite an experience dealing with the political class and bureaucracy. How has yours been?
I have had a great time. My own view is that if you do the work, get along with people, that is 80-90 percent of the job done. We know about the limitations of bureaucracy, rules, restrictions, procedures, but I would say that the dirty secret of the bureaucracy is that between what you are told you cannot do and what you are told you must do is a huge grey area for opportunistic behaviour. You just have to seize the opportunity. And I have had good bosses. The finance minister and prime minister [Narendra Modi] are very open to ideas and analysis. So, it has been a delirious experience for me.