The Make-Up Artist of Indian Courtrooms 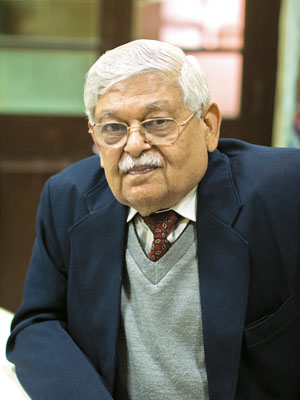 Niranjan J. Bhatt
76, senior lawyer, mediator, Gujarat
What:
- To create awareness among judges, lawyers, and the common man on mediation.
- To train mediators
Why:
- To help reduce backlog in the Indian courts
Challenges:
- Support of judiciary to create court annexed mediation centers
- Lawyers look at it as a threat to their legal fees

Each time the case was heard the old man came from the village and stayed at Niranjan Bhatt’s house. The old man’s son, an insurance salesman, had died after a truck had hit him. His company had got Bhatt to fight the case of compensation. The grieving father hardly understood anything that was being discussed in the court because it was all in English. And then Niranjan J. Bhatt, senior lawyer and mediator, Gujarat civil court, won the case and got the old man a good compensation. “We fought a good fight in court,” says Bhatt. But even in that moment of triumph, he was surprised to find the father weeping.

It was only later that Bhatt understood. To lose a young son was bad enough; but to be dragged into a courtroom fight to get some money was pure hell.

This happened in 1967 and it changed Niranjan Bhatt’s perspective on law. It was an eye-opener to the emotional toll that court cases take. He was convinced that for someone in trouble, winning a court case could not be the only desirable solution. After that, Bhatt was not interested in just being a trial lawyer. Therefore in 1999, when the opportunity presented itself, he decided to shift gear.

“I wanted to help reduce the backlog in court cases, and help people find a solution to time, money, and energy spent in countless hours of litigation. I also wanted to re-light the spark that lead me into the law in the first place — the desire to help other people in times of trouble and the feeling of personal satisfaction that goes with that.  Mediation offers that promise,” he says.

Although Bhatt knew since 1999 that mediation — or an out-of-court settlement — showed promise, he had to wait till 2002 to push the cause. In 1999, a committee appointed by the Supreme Court submitted its suggestions to push for various changes — including mediation — in the Indian courts. Bhatt was part of this committee. But, by the time the changes got approved it took another four years.

In the 14 years that Bhatt has been spreading the message of mediation, he has solved at least 50 cases. However, Bhatt’s greater contribution to the cause of mediation is that so far, he has taught at least 1,000 lawyers how to carry out a proper mediation exercise.

Almost any dispute — even minor criminal offences — can be taken up for mediation: This includes divorce, property disputes or labour disputes. All mediation effort can be clubbed under two broad categories: Court-annexed mediation and private mediation.

In India, mediation is just starting to take off. With the right support, it can shave off significant years from the backlog of 3.13 crore court cases in the Indian justice system. In Bangalore, in the three years that it has been operational, the mediation centre has already seen approximately 17,000 cases go through mediation, with a success rate of 60 percent. This would relieve almost five judges of their total current load of 2,147 cases each. All this has been possible because of Justice A.M. Ahmadi’s work 14 years ago. It was he who initiated a committee to take a look at the Indian judicial system, and see what could be done to improve it. This committee’s report lacked the insight of a trial lawyer, and that is why Bhatt was roped in.

In 1996, as part of this exercise, Bhatt and a few others were sent to San Francisco to study the American legal system. When Bhatt returned to India, he, along with the committee, proposed their changes. This is what resulted in the 1999 amendment of the Civil Procedure Court that pushed for various forms of Alternative Dispute Resolution (ADR) like arbitration, conciliation, mediation, and judicial settlement and also settlement through Lok Adalats. Bhatt was still not satisfied with this, so he went back to his home state of Gujarat and started a non-charitable trust called Institute for Arbitration Mediation Legal Education and Development (AMLEAD), to train mediators. He also drafted training manuals on mediation. After two years he realised he had one drawback: He was not a trained mediator. So he enrolled in a programme at Harvard in 2001.

Bhatt says, “I wanted to understand this fully myself before I could train others. In the last 14 years, I’ve been working on two branches: One, to popularise mediation, promote it and make people aware, and two, push for court-annexed mediation.”

In 2000, when he was on a  judicial exchange and study programme, he met Greg Relyea, senior mediator, American Arbitration Association and a Distinguished Fellow of the International Academy of Mediators. “Niranjan and the members of the delegation were so interested in mediation that on the first evening we met, we spoke all through the night about the mediation process and the ways it might help India to reduce court congestion,” says Relyea.

It is this empathy that is his biggest weapon. It gets people to see reason. For instance, there was a case where two companies were in dispute because one company had accused the other of supplying a defective machine; and refused to pay the crores of rupees that was due. The biggest challenge for Bhatt was to make the parties aware of their best and worst alternatives. “So I asked a question to the seller,” says Bhatt. “Now you don’t have the price you asked for, you have already supplied [the goods] and it cannot be used because of some defects. The other side has asked [you] to take machinery back, you are insisting on the price. You will appear in court, there is the uncertainty of litigation, once a party wins, and the other files an appeal. These are your worst alternatives. What is the other? Take back the machinery, make repairs, and sell it to someone else; or the machine could be brought down and the parts sold. Third, you can sell it to someone else saying there are defects; are you willing to buy it?” The company accused of selling the defective machine took it back, repaired it and installed it. The other party paid up.

“It’s very comforting to have him as your mediator,” says Sadhana Ramachandran, mediator, Delhi Mediation Centre. “He is always smiling, glowing with feeling and empathy for others. He immediately puts you at ease. We would all like to be like him.”
Law and Behold!

In spite of this, the going hasn’t been easy for Bhatt. For starters, judges don’t always refer cases for mediation. So far, the Ahmedabad Court has sent 400 to 500 cases to the mediation centre for mediation. This is low in comparison to Bangalore and Delhi, which see at least 4,000 cases referred to mediation every year.

Bhatt was handicapped because Gujarat took six years to warm up to mediation. “Being able to get the support of the judiciary is very important,” says Sriram Panchu, senior mediator, Chennai. “We have been fortunate to have good chief justices, and Bhatt did not have that good fortune, which is a pity.” What Bhatt began first, was not recognised in his home state nor was it given any judicial support.

Judicial support is not just important for case referrals to mediation but also for judges to push for awareness and training programmes in their respective courts. Bhatt talks  about Justice Markandey Katju, who established the first court-annexed mediation centre in the country in Chennai and Justice Cyriac Joseph, who pushed for a court-annexed mediation centre when he was in Bangalore. Both organised various awareness programmes and sensitisation programmes when they were chief justices of the respective High Courts of Madras and Karnataka.

These programmes are not just for judges but also for lawyers, who initially felt that this would decrease their earnings. “Once the lawyers understood that mediation can help clear several cases in a short period, this allowed for more cases to come through the door,” says Laila Ollapally, senior mediator, Bangalore mediation centre. “The measure of input to output was clear: They could clear more cases too. So their volumes went up”

Bhatt says there are a number of things that need to come through for mediation to become more popular. One is the need for mediators to be paid. Currently a number of them are doing pro bono work. Delhi pays its mediators approximately Rs. 10,000 per mediation, and Bangalore approximately Rs. 3,000. Two, the government must provide good infrastructure for mediation centres as well as funds for the maintenance of these centres. Third, the high court needs to take more interest directly. He says, “Once a judge in charge is changed, the continuity of his efforts towards mediation is left in the hands of his successor.” Fourth, there has to be coordination between the bench and the bar. Bhatt says, “In Delhi, the mediation centre has been successful because Delhi has a joint committee of lawyers and judges to steer mediation. In other places only judges steer the mediation, which may not get them enough support.” Last, Bhatt says, “We need more training programmes for litigants on mediation.”

He makes the most of his contacts with international senior mediators to get them to train mediators and help mediation in India. In early December this year, Hiram E. Chodosh, dean, S.J. Quinney College of Law, is sending a team to unveil the first phase of a virtual mediation training capacity with the Delhi mediation centre.

But all of this is not enough to satisfy the man who dedicates his weekends to work on mediation. Bhatt says, “I am still not satisfied about what is happening. This is just the beginning, and we may need five more years to popularise mediation.”

Tweets by @forbesindia
Fare Deals For The Skies
Can Magnets Enhance Your Mood?