An act of faith: Junoon Salons is taking performing arts into virgin territory 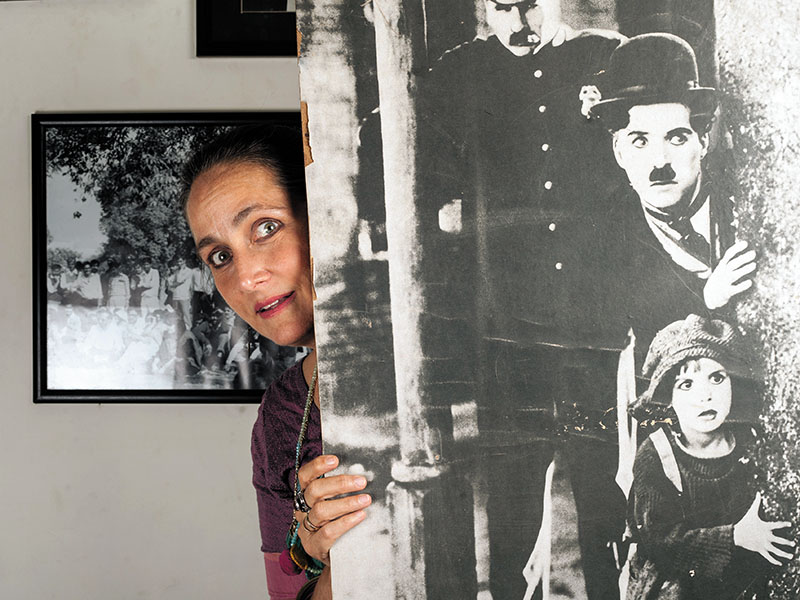 Sanjna Kapoor at the Junoon office in Mumbai
Image: Aditi Tailang
On January 12, when the lights dimmed, and the hall darkened at Mumbai’s G5A auditorium, no one quite knew what to expect. The audience—a swish set selected by an invitation-only membership—sat in hushed silence, with garlands wrapped around their wrists, some in chairs, some on cushioned baithaks; the performers, some on the dark stage, some in the wings, waited with uncertainty for their cue to begin. The audience and the performers were unknown to each other, each having only heard of the existence of the other.

But, by the time the performance ended, taking an hour longer than scheduled, mesmerised members of the audience had climbed onto the stage to shake a leg with the dancers, while some others clicked selfies with them. Later still, they all shared their stories and laughed over dinner. The two entirely unknown creatures had, in the span of those two-and-a-half hours, bridged the gap that had remained gaping between them forever.

Junoon Salons, co-founded by Sanjna Kapoor and Sameera Iyengar, has set out to do just this. And much more.

The Lavani performance by Kali Billi Productions, written by Bhushan Korgaonkar and directed by Savitri Medhatul, at the first Junoon Salon event in January was a gamble. Kapoor and Iyengar did not quite know how the urbane audience would take to a dance form that has gained a reputation, unfairly so, for being associated merely with titillation.

Historically, Lavani became popular in western Maharashtra as entertainment for soldiers, farmers and workers. The dance form is traced to women from the Kolhati, Dombari, Kalvat, Mahar and Mang tribes. Of the different forms of Lavani, Sangeet Bari—the one performed at the Junoon Salon event—is a more intimate one, where performances are held for a maximum of 50 people, and patrons are, traditionally, upper caste men.

“We chose Sangeet Bari because we said, ‘Let’s test out members!’ Because their reaction would tell us immediately if they were willing to go a long way with us,” says Iyengar.

The audience, however, was left gobsmacked. “I attended the Lavani performance, which was spectacular and went beyond my expectations,” says Kiran Rao, film director and producer. “It was the first time I had experienced Lavani, and I learnt about the history and cultural context of the art form, and saw some incredible performances.” Rao and her husband, actor Aamir Khan, are patron members of Junoon Salons.

The Lavani was a first not just for Rao, but perhaps everyone in the audience. “I attended the performance, and it was spectacular. I had never seen something like this before,” says Sridhar Iyengar, who has served in various leadership roles at global consultant KMPG for 34 years and is associated with several company boards, apart from being a patron of Junoon Salons. “Although I am not anti-Bollywood, the Hindi film industry does take a lot of energy out of other platforms and art forms. Everyone who came for the performance that evening went away saying that this is something worth supporting.”

Although immensely popular in Maharashtra, Lavani is restricted to a predictable, regional audience, and is not considered to be a mainstream, urban performance art. Consequently, audiences in urban areas have little exposure to it, and whatever they have seen of it has come through the skewed mediums of cinema and television.

“Our country has an astounding diversity of performance arts,” says Iyengar, “but there is no infrastructure to bring them out of their local, regional areas and present them on bigger stages, to a wider range of audiences.”

With this is mind, Junoon Salons staged its next event in April, inviting puppeteer Anurupa Roy and her group Katkatha to perform their play Mahabharata, which is created in collaboration with master puppeteer Gunduraju, a ninth-generation performer of the leather shadow puppets form called Togalu Gombeyata from Karnataka. The play explores the inner dilemma and stories of 14 characters from the epic. The event included performances of select sections of the Mahabharata—the original play is 75 minutes long—and discussions around these performances.

“The people who were present in the audience are not the ones who would come to watch us otherwise,” says Roy. “Junoon Salon was an exciting opportunity for us. It wants to take performing arts to as many people as possible as collaborators and partners. The audience at these events may have a lot of exposure, but they may not have been exposed to many art forms.”

The oldest puppets in the world are either from India or China. India itself is unique because it has 17 living traditional forms of puppetry, the earliest being a few thousand years old. These are rooted in the rich and diverse narratives from the epics, Puranas and folk tales. Roy founded Kat-Katha in 1998 and primarily works with an adapted version of the 500-year-old Japanese Bunraku form of puppetry.

Roy says despite India having such an exceptionally rich heritage of puppetry, India does not have a single school where people can learn the art form. “Traditional puppeteers are trained within the family, and those like me learn by trial and mostly error. Eventually, we have to go to an international puppet school to learn. But while the international exposure is great, does it really prepare an Indian puppeteer?” she adds. 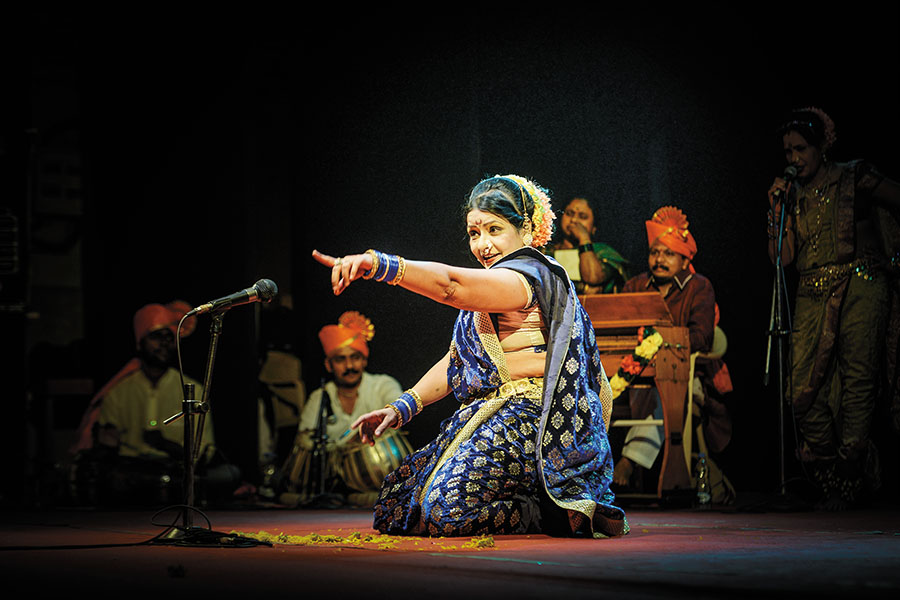 The Lavani performance by Kali Billi Productions
Image: Kunal Vijayankar
Junoon Salons is an effort to bridge this chasm that divides some of the richest performance art forms in the country and those who can support them in meaningful ways.

“Years ago, I had wanted to start a salon,” says Sridhar Iyengar. “When I was on the board of industries, between 1997 and 2000, we would all congregate at Nandan Nilekani’s house in Bengaluru for the evenings. I tried to recreate the same thing in the US, where we planned to have special shows for members of the salon, and then open it up to the public.” Iyengar’s plans, however, never quite materialised. “So, when Sanjna came to me with her idea of Junoon Salon, I jumped at it. It was exactly what I had wanted to do.”

Iyengar adds that it is not about just the economic benefits from an evening’s performance, but the exposure that these local performance art forms get that matters.

Fellow patron Rao shares similar thoughts. “Events such as these could yield some far-reaching benefits, as the audience comprises people who are influential as well as interested in the arts,” says Rao. “If impacted by something they see, they are capable of changing the landscape around them.”

The membership—individual, duo or corporate—is by invitation only, and a year’s enrolment will include three performances spread over a year . At the moment, there are 22 members, and the number of patrons will be capped at 100. The next event is scheduled for October 5. “It’s a rolling membership, and people can join any time of the year.” Says Kapoor. “The idea is that they are patron members, and money is not the only concern. We need people who know their money is really being valued towards building something very strong for the future.” 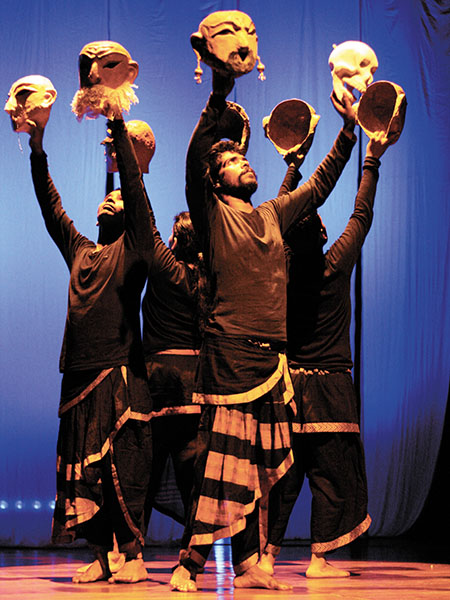 Mahabharat by Katkatha
Image: Kunal Vijayankar
Of the three performances in a year, one would be a more traditional performance—such as the Lavani—with a master performer; the second would be by a mid-career performer—such as Roy—who is creating something powerful; and the third would be from someone young and experimental. Performances are tailored to the venue, available time, and the audience. “The outcome the artiste will decide, but the direction we will decide together,” says Iyengar. “What we understand about theatre and performing arts in India is far wider, and has greater history, than most parts of the world. We will be bringing performers from villages and other cities who are doing interesting work. Most people are not aware about these art forms, because there is no infrastructure to showcase them.”

“We also invite artistes who would love to be there for these shows as part of our audience,” says Kapoor. “For instance, we invited [actor] Naseeruddin Shah for our second event. So the audience can engage with a wider range of people, and not just their own… It’s an informal evening, but not a casual one.”

Although, as of now, all Junoon Salons’ events are going to be held at G5A in Mumbai’s Lower Parel area, Kapoor and Iyengar are open to spreading their wings to other cities. “If someone comes up with the idea of the Salon going to Delhi, and we get members, then we will make it happen,” says Kapoor. Iyengar adds: “We are keen to eventually be in other places in the country, and are open to having people invite us. But they have to be aware that they have to be partners in this initiative.” 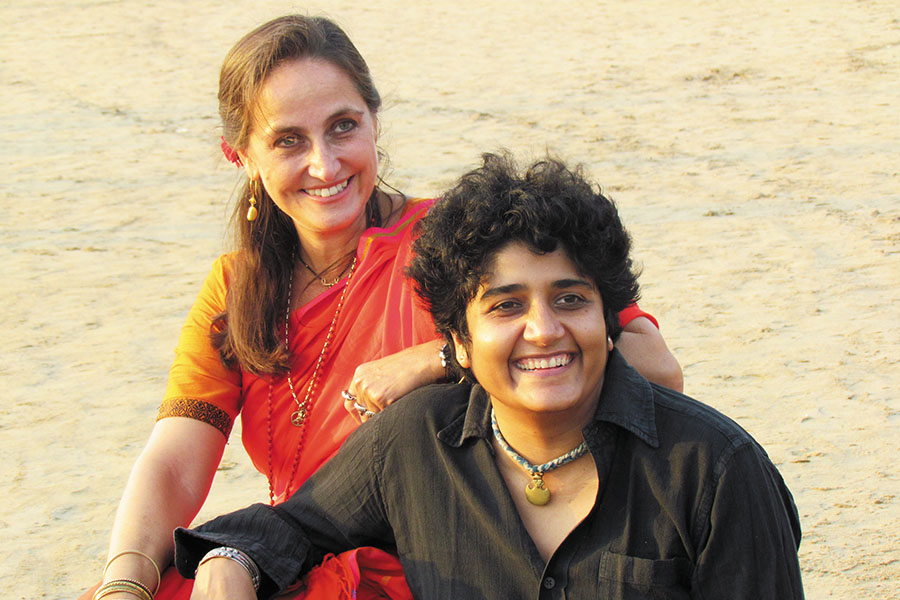 “I thought that young people need to have their horizons widened because the Indian education system puts blinkers on them from Class 9 onwards, thanks to the extreme academic pressure,” says Bijapurkar. “I teach as a visiting faculty at IIM-Ahmedabad and I felt that interacting with what Junoon does would be a mind-opening experience for them that they would definitely savour.”

Roy’s performance lasted one hour and 15 minutes, followed by an interaction with students that went on for another hour and a half. “We had to cut it short because Anurupa had to catch a flight,” says Kapoor, recalling the highly involved and intelligent discussion that resulted from the show.

“I was a little anxious before the show started. There were all these young people, some were just out of school, with their mobile phones in their hands...,” Kapoor remembers. “And then the lights went off, and the show started… quite mellow, with the traditional singing of the leather puppeteer Gundurajuji singing on his harmonium. There was an initial bit of giggling and tittering in the audience, but within moments they were completely involved, reacting to the moments of magic.”

Roy says there was some amount of confusion and resistance from her audience at IIM-Indore. “These are our future corporates. Those who have, in a way, had the best education. But they have scarcely any exposure, and know little about the performing arts. They are, what I call, ‘virgin audiences’.”

The hope now is to not just return to IIM-Indore for subsequent orientation weeks, but to take performances to more business schools. “Exposure to the arts, social issues and human dilemmas are important to turn out graduates who are whole human beings, who can positively impact society and guide the next generation as well,” says Bijapurkar. “Junoon Salons has created a lovely format to engage students.”

Tweets by @forbes_india
Ten interesting things we read this week
8.2 percent GDP growth: No reason to celebrate yet