The crazy whiskey-makers from Nashville

With an arsenal of alt whiskeys and other small-batch spirits, Nashville's Corsair Distillery is disrupting and elevating the craft of craft distilling 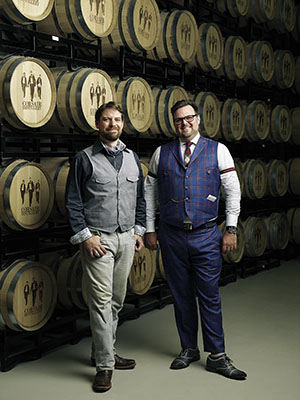 For all the barrels of craft liquor being produced in America, so much of it tastes the same. Crisp but relatively flavourless gins crowd bar shelves next to atomic whiskeys as pleasant as molten lava and rows of bourbons hitting the same caramel notes. So it is a great source of relief to discover Darek Bell and Andrew Webber, co-founders of Corsair Distillery, sitting in a shack-like structure on the outskirts of Nashville, Tennessee, with enough imaginative bottles in front of them to fuel a hearty bender.

Webber and Bell, both bearded and boldly attired—Webber in a floral-print shirt and whitewashed jeans, Bell in a blue striped suit and flowering handkerchief—have made peculiarity the defining characteristic of Corsair spirits. It’s what pushed them to create Triple Smoke (made with Scottish peat and American cherry and German beech woods), their first whiskey and still their bestseller. The duo is now trying to unleash another blend with the same amount of originality. As Bell explained a few minutes earlier: “Our ethos is, if it’s been done before, we don’t want to do it.”

They pour six 100-proof single-malt whiskeys into tulip-shaped glasses, calling out what they taste as they sample each one. The first is an unsmoked single malt (“Grape-Nuts cereal,” says Bell), then five malts smoked, respectively, with hickory (“Like a barbeque,” declares Webber), maple, pecan (“Floral, lighter and a nutty finish,” he continues), apple and finally black walnut, an acrid mouthful. “You wouldn’t want that to be the only thing in a bottle,” Webber explains. “But it’d be a very good one to build a multi smoke whiskey on because it provides a deep background.”

It’s a whiskey that many distillers might pour straight down the drain, though it’s perfectly in character for Bell, 41, and Webber, 41, to admire it. Seven years into the launch of Corsair the two rebels are still gleefully flaunting every alcohol convention they can—from creating a quinoa whiskey and a barrel-aged gin to hiring a woman as their head distiller. Today, Corsair spirits are available in 39 states and seven countries for about $50 a bottle and have a passionate following, selling roughly 14,000 cases a year, up from, well, nothing a few years ago. They have also piled up awards, including gold and silver medals from the closely watched Wizards of Whisky industry event—most notably its American Craft Distiller of the Year in 2014.

Corsair’s creation occurred in a place where many entrepreneurial recipes are first concocted: The garage. In this case, the one attached to Bell’s suburban Nashville home, in which he and Webber brewed beer before moving on to moonshining. In 2008, after a few successful experiments and failed pitches to investors, they broke out their credit cards and opened a distillery in nearby Bowling Green, Kentucky, because it was illegal to operate one commercially in Nashville. They soon released a well-received red absinthe (ruby-hued and floral-tasting after adding red hibiscus) and a gin made with classic botanicals such as juniper and coriander suspended in a basket above the still rather than directly steeping them. 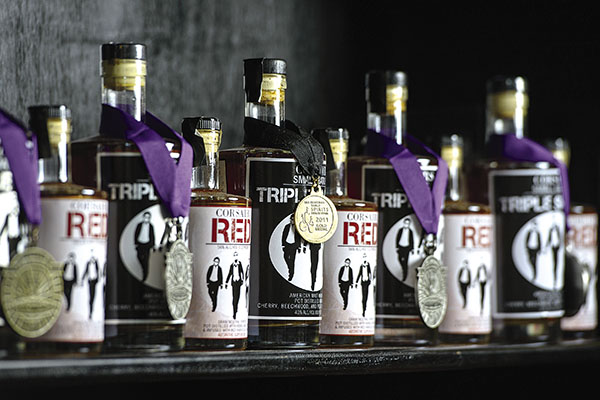 While many artisanal brands have tried to imbue their products with a sense of advanced age—often connecting them to a purportedly ancient family recipe—Corsair’s guiding spirit has been unabashed youthfulness. For their label, they chose an image of three black-suited dudes. (Webber and Bell leave it to interpretation as to whether the photo evokes the Rat Pack, the Blues Brothers or Reservoir Dogs.) In 2010, following a legislative change, they finally opened a second distillery in Nashville, now the centre of Corsair’s whiskeymaking. They also rapidly promoted Andrea Clodfelter, 28, from a bartender in the tasting room to the site’s head distiller.

This summer, Corsair will open its fifth facility, giving it more than 5,000 gallons of still capacity (up from 50 gallons in 2008). Bell and Webber also plan to expand into brandy and wine with some vineyards. With almost teenage impatience, Corsair wanted neither to wait to age its whiskey (though a whiskey’s status, and taste, usually strengthen with time) nor to focus on a single product. A Corsair whiskey is almost always a year old or less with no age statement on the bottle. (Ever confident, Bell proclaims: “If you want an aged whiskey, I’ll tell you my favourite.”) Not waiting enables Corsair to release a lot of whiskeys quickly, and in addition to Triple Smoke it has debuted such unusual recipes as Oatrage (which tastes like a mouthful of Honey Nut Cheerios), Hopmonster (reminiscent of Belgian Tripels and American IPAs) and quinoa whiskey (nutty with a peppery finish). These are whiskeys made for an adventurous drinker, not a beginner.

The most important recent addition to the Corsair family is not found in a bottle—it’s the 300 acres of farmland Bell inherited from his father on the winding, heron-filled banks of the Cumberland river about 15 minutes from downtown Nashville. Corsair has already built a malting facility on the plot and plans to grow grain on it, too. Using the property is immensely practical—going grain-to-glass reduces the likelihood of an inflamed pressure point in Corsair’s supply chain—but it’s hard not to look at the land more symbolically, as yet another way for Webber and Bell to separate themselves creatively. “We don’t have a board,” Bell says proudly. “We don’t have outside investors. There’s no power struggle. If we want to make a crazy whiskey, we can just do it.”