Last month a clutch of singers led by Asha Bhonsle demanded that they be given royalty from the sale of sound recordings. They formed a performers’ body called Performers Syndicate Limited (PSL). The 76-year-old diva’s clamour is more understandable in the context of the changes in the music market.

Revenues from physical sale (CD and music cassette) of music albums are dipping, but the caller tunes and ring tones market is on the way up. Industry experts estimate that this accounts for almost 50 percent of revenue for some record companies. The launch of FM radio channels across the nation too holds a new lifeline to the music fraternity, as stations also pay royalty for the songs they broadcast. 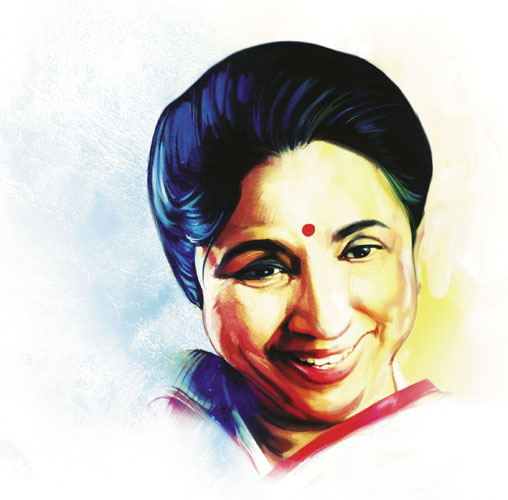 Image: Vidyanand Kamat
A clutch of singers led by Asha Bhonsle demanded that they be given royalty from the sale of music
A song can now earn its living through multiple means — ring tones, radio — and the value of these new revenues can’t often be calculated by singers upfront. Therefore singers now want a share of this future upside. They are not alone. Lyricist and composers body, the Indian Performing Rights Society (IPRS) has demanded a remunerative right to all songs converted to ring tones or even if they are played on radio. Legal cases have been filed by radio broadcasters against the copyright societies, e.g. ENIL (Radio Mirchi) Vs. PPL (Phonographics Performance Ltd.) due to an increase in rates. A new tariff rate card has been recently issued by IPRS for various forms of usage and issuance of performing licenses.
What Experts Say
Atul Churamani, vice president of Saregama India, a record company, believes revenue share is indeed the way to go. But the devil is in the details of the contract signed between artists and film producers or even music companies. The way radio stations share revenues with the government to launch new FM stations, instead of paying a one-time license fee, may be the way ahead to resolve the royalty issue with the music fraternity.
According to the IPRS’ new tariff, the revenue share royalty they demand from radio stations varies from 3 to 10 percent of gross revenue of the station and is proportional to the percentage of musical works broadcast by the station from the repertoire of the Society. This royalty is then split between record companies, composers and lyricists in a pre-determined share (see ‘Sharing the Spoils’ below). Singers can be added to this list but that move will come at a cost.
Our Take
A common code of conduct needs to be adopted by the music community in drafting legal contracts for royalty revenues and performance rights ownership — akin to the radio industry’s revenue share deal with the government.
Singers need to understand that their upfront payment will come down. According to back-of-envelope calculations, their upfront fees will be almost halved; the rest of the money will come in over time as revenue share royalty.
Finally, forming various bodies such as PSL, IPRS and PPL to collect revenues is a duplication of effort and complicates the matter. One body that deals with all forms of music royalties can reduce administrative expenses and increase efficiency of revenue collection. This entity will have to monitor sales diligently so that no one is taken for a ride.

PPL (Phonographic Performance Ltd.)
PPL (whose members comprise publisher/sound record owner — typically the record company) gets a weighted average of Rs. 660/- per needle hour. If the government agrees to singers’ demand, they will get a share from this.

IPRS (The Indian Performing Rights Society Ltd. )
IPRS is also purportedly paid by some radio broadcasters a weighted average of Rs. 660/- per needle hour, which is supposedly shared between the lyricist (20%), composer (30%) and publisher (50%) after deducting its administrative cost which can go up to a maximum of 15% of its collections. Here, quite often the publisher is the record company or rarely it’s the film producer if he has not sold the rights to the record company.

(This story appears in the 06 November, 2009 issue of Forbes India. You can buy our tablet version from Magzter.com. To visit our Archives, click here.)