Geeta Goel has steered philanthropic initiatives towards improving education, jobs and livelihood in the country 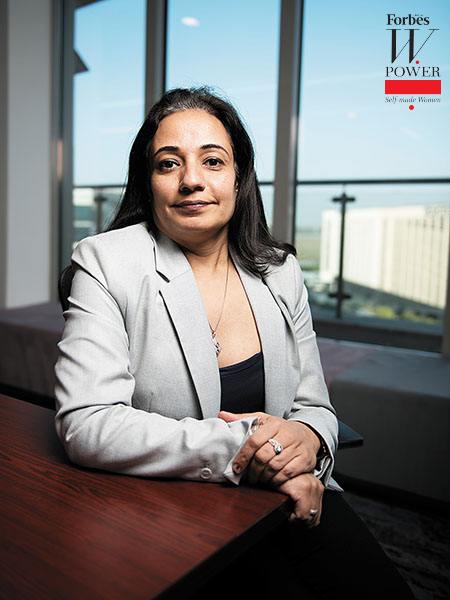 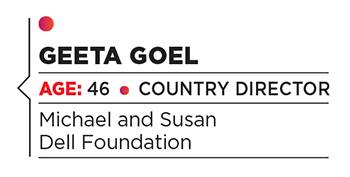 Geeta Goel dreams of a day when she will finally be out of business. But, for now, she knows it won’t happen anytime soon.

That’s because as the country director of the Michael and Susan Dell Foundation, Goel drives the organisation’s investments across India to improve people’s lives in the form of grants and donations, and as impact investment across companies that can provide accessible services to the poor and needy.

“The journey has been extremely rewarding and interesting,” says Goel. “We have been able to push the boundaries when it comes to making a change.” So far, since it began operations in 2006, the foundation has committed over $250 million across the country.

Today, the organisation that Goel leads primarily works in the areas of education, financial services, and livelihood. Among others, the foundation has made investments in edtech companies such as ConveGenius, Onlinetyari, Avanti Learning Centres, in addition to funds such as Education Catalyst Fund, India Education Investment Fund and Unitus Seed Fund. While the education portfolio looks at helping underserved students improve academic performances and offer access to quality education, the livelihood portfolio focuses on providing high-quality vocational skills, especially to the marginalised.

“We want to accelerate the human opportunity,” says Goel, who has also invested in skilling companies such as LabourNet and DRF . “We may not go after the biggest opportunity, but we want to create equity in opportunities.”

“When we started, microfinance was largely rural,” Goel says. “Urban microfinance was less than 5 percent and after we did our background research, especially based on models in Latin America, we knew the potential was huge,” Goel says. Between 2007 and 2009, the foundation made eight investments in the microfinance space, and by the time it began exiting the ventures, urban finance made up for 65 percent of the total microfinance market in India.

Today, however, Goel is done betting on the microfinance segment, and instead drives her energy into improving education, jobs and livelihood in the country. “We want to bring about a change in India, especially among the low-income categories,” says Goel.

Much of her desire of improving lives, Goel reckons, is due to her middle-class upbringing and exposure earlier in life. Her father was in the railways and that meant staying in many small towns across India. “From early on, I had known that you get what you work towards,” Goel says. After graduating from the illustrious Lady Shriram College in commerce, Goel went to IIM-Ahmedabad to complete her MBA. “I was among the youngest in the batch,” says Goel.

“ The journey has been rewarding. We have been able to push the boundaries when it comes to making a change.”

At IIM, Goel developed a taste for corporate finance and was soon offered a job at Coopers & Lybrand, a consulting firm, in Mumbai. After a year, she moved to Delhi to become the first employee of the firm in the city and, over the next few years, worked on numerous cross-border transactions and joint venture deals. Coopers & Lybrand merged with Price Waterhouse in 1998 to form PricewaterhouseCoopers (PwC).

By 2006, Goel knew she wanted to do something more impactful. “After my second son was born, I continued working. But I would often think about what I am doing and whether this was the line of work that I wanted to do,” Goel says. “I had a lot of internal debates.”

That’s when a colleague mentioned about setting up a microfinance fund, and Goel was asked about her interest in joining them. Goel then went on to explore more about the impact such funds had and soon realised her skills could be used there. “I realised it was personally satisfying and intellectually stimulating,” Goel says. Although she never joined the fund—something she calls destiny—a few months later she joined the Michael and Susan Dell Foundation as its sixth employee in New Delhi.

“The focus was on microfinance and education,” Goel says. While the foundation made its first investment in Ujjivan Small Finance Bank a few months before she joined, Goel was instrumental in driving investments into eight microfinance companies thereafter, and spent the next few years as the portfolio director and then as vice president, before being made country director in 2018. Over the next few years, apart from improving learning outcomes and bringing best practices to the education sector, Goel is also looking to help the bottom percentile of the population by funding ecosystem solutions to develop early-stage innovations in skilling people.

So what does she look for while making such investments? “At the core of it, the product has to have an impact on improving the target segment,” says Goel. “Apart from that, the promoters’ reasons for the investments, the potential of the idea, the potential to attract other investors and the unit sustainability of the product are also factors.”

Entrepreneurs who have worked with her say her ability to collaborate and show empathy are some of her biggest strengths. “She operates from a sense of purpose and cares deeply about the impact,” says Akshay Saxena, co-founder of Avanti Learning Centres, a Mumbai-based test prep company. “She understands the problems entrepreneurs face, both personally and professionally, and is always there to help and collaborate without overstepping the boundaries. That focus on the mission and its purpose is inspiring.”

Today, Goel is quite clear about where she wants to take the foundation. “My heart and mind are in India,” she says. “For me, the future is all about bringing a change in the country, especially for the low income and the marginalised.”