Neera Nundy is strategically streamlining the social sector with Dasra, while pushing philanthropists to go the extra mile in giving 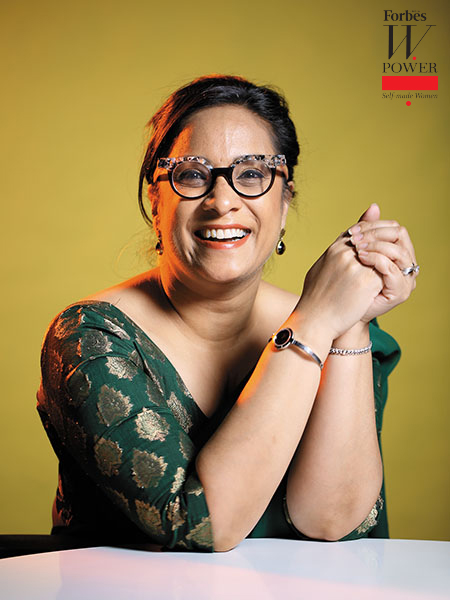 Two 24-year-olds working at Morgan Stanley in New York in 1998 decided to do their bit for society by fundraising for a few non-profits in India. They created a PowerPoint presentation about the cause, went around their office and asked for funds, but could only manage to collect $500. They then mustered up the courage to approach former Morgan Stanley Chairman Richard B Fisher, who said, “What I enjoy the most in my retirement

years now is philanthropy. Here’s $162,000 (about ₹1.15 crore) and $50,000 (₹35.7 lakh) every year for the next five years. Go start what you have created.” While Fisher passed away three years after making the commitment, Deval Sanghavi and Neera Nundy quit investment banking in July 1999 and June 2000, respectively, and relocated to Mumbai to launch Dasra: A non-profit for non-profits.

Taking the plunge into the social sector by quitting a high-paying job at Wall Street was tough, especially for Nundy, who briefly went back to investment banking to pay off her education loan for Harvard Business School, and resumed working with Dasra full-time since 2003. “Growing up in Toronto, Canada, I aspired to wear a business suit, live in New York and make big money. I was living my dream.”

The 45-year-old admits, however, that working in the social sector wasn’t entirely an altruistic move. She explains she wanted to apply her investment banking exposure to help non-profits strengthen their management capabilities so that they can make enough money to create a sustained difference. “Unless you provide a significant amount of funding for these organisations, it’s challenging for them to actually scale,” says Nundy. To start with, Dasra began working closely with startups and incubators like Magic Bus and Viilgro instead of established organisations, since the former was more receptive to their ideas of how the social sector must be approached.

Setbacks during the organisation’s early days turned into learning lessons for Nundy. Take the case of a US-based tech entrepreneur who committed to provide funding of $1 million (₹7.15 crore) but couldn’t make enough money due to the dotcom bust in 2002. “So we had to renegotiate our commitments, and let go of people. Even though it was a team of four,” recalls Nundy, adding that it was a wake-up call for them. “What kept us going was the feeling that we have more to do, and what we had set up could potentially make a difference,” she says.

Over the years, Dasra’s team, which now includes about 105 people, helped corporate foundations and philanthropists be more strategic in their giving, and linked them with other non-profits. “If you support other NGOs and help them grow, their impact will grow. And then, we’ll solve the largescale problems in the country,” she adds.

Nundy has supported over 800 non-profits across sectors like nutrition, governance, maternal health, sanitation, education and livelihoods. Her organisation empowers over 180 leaders annually, and some of the organisations they have backed have reportedly scaled 9x times in outreach and 6x times in budget. Dasra has directed ₹500 crore for the development of various communities in India.

Nundy also helps non-profits improve their access to manpower and resources by educating them on the importance of paying for talent, building and sustaining institutions for greater impact. “Sometimes, there is a tension between wanting to create an impact and feeling like you have taken away money that is meant for the community to run your own organisation,” she explains.

Dasra is working to make the social sector more transparent to help donors overcome inhibitions about whether their money will reach the intended beneficiaries. The organisation encourages philanthropists and business leaders to engage with the development sector in the same way they approach their businesses. But, as Nundy puts it, “The difference is we don’t have the same measures that unite us. For them it’s profits, for the social sector it’s impact.”

Other shortcomings faced by non-profits include inadequate implementation of policies in the social sector, and systems and processes to measure impact. Nundy sees the latter as an emerging area and is attempting to leverage technology to help tackle the problem. Apart from constant collection and analysis of data, Dasra also creates feedback loops that help them modify programmes and engage more actively with the community.

Nundy has also created a network for non-profits in the social sector. For their alumni, comprising Indian organisations plus international non-profits with operations in India, the Dasra Social Impact runs leadership and accelerator programmes. Lend-A-Hand India, a non-profit focussing on vocational education in secondary schools in India, has benefitted from the programme since 2009. Co-founder Raj Gilda says Nundy’s organisation introduced them to not only other non-profits, but also funders and policy makers. “The NGO business works on referrals and trust, and having Dasra introduce us added credibility to our work and really helped us during the initial funding.”

“ If you support other NGOs and help them grow, their impact will grow. Then we’ll solve the largescale problems.”

Nundy says convincing philanthropists and organisations to give is not an easy feat. Often, causes like education and health receive the most attention, while others like domestic violence, sex trafficking and sanitation do not find enough funding. “It takes both the evidence of ‘why’ and storytelling, apart from exposing them to the sectors and engaging with them,” she says. “It’s a long journey; it takes us about a year-and-a-half to two years to convince somebody to give for the first time.”

This is also why research has been integral to the work she does. “If you were going to convince people and change their mindset, it has to be research-led. The [social] sector struggles with a certain level of subjectivity, and we bring in the objectivity that has made other sectors successful,” explains Nundy.

Turning Dasra into a for-profit has crossed her mind several times, but, she explains, “A lot of what motivated Deval and I, is that we’re a non-profit, that what we have created is less transactional, which allows us to focus more on impact”.