After violent start, Apple supplier looks to get back on track at new India plant

Wistron, a Taiwanese manufacturing contractor, was put on probation by the company in December after underpaid workers went on a rampage 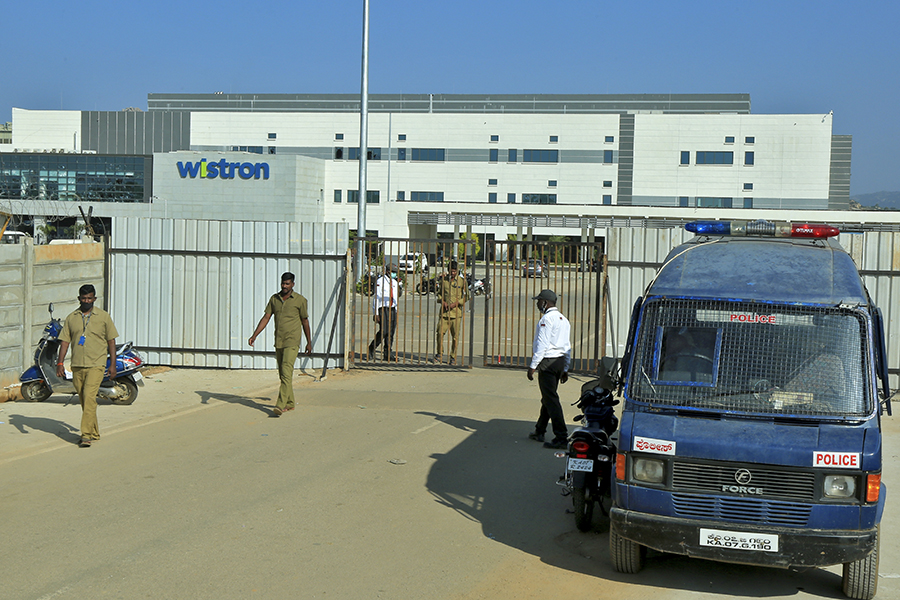 Policemen stand guard outside a facility run by Wistron Corp, a Taiwanese contract manufacturer for Apple, in Narsapura near the southern city of Bengaluru, India, December 14, 2020. Photo Credits: REUTERS

Apple’s push to expand manufacturing outside China, with new supplier facilities in India, hit a violent glitch when underpaid workers at a factory set up by Taiwanese contract manufacturer Wistron Corp went on a rampage in December. Wistron is looking to put the episode behind it and expects to restart the plant, located at Narasapura, an hour’s drive from Bengaluru.  “Since the events at our Narasapura facility in December, we have been working hard on improvements across the board to raise standards and fix the issues,” Sudipto Gupta, managing director of Wistron’s Indian operations, told Forbes India in an email. “We are looking forward to restarting our operations and welcoming back team members and we thank them for their patience and support as we worked through corrective actions.”  Workers, angry about 12-hour shifts, not having been paid for working overtime and on holidays, destroyed company property and took away iPhones. “All employees have been promptly and fully paid, and we implemented new hiring and payroll systems to ensure everyone is paid correctly and provided the correct documentation going forward,” Gupta said in his email.

Apple put Wistron on probation, making it the second major contractor the tech giant called out for violation of its supplier code of conduct in the same quarter. In November, Apple put Pegatron Corp on probation for labour violations in a student workers’ programme in China, Bloomberg had reported citing the iPhone maker.  Wistron’s Gupta added: “We will be delivering enhanced training programmes for all workers, and have put in place a new system for workers to get information and raise any concerns they may have, anonymously.”  In December, Apple and Wistron acknowledged that some workers weren’t paid their dues over the previous two months. Wistron added that it was removing the vice president who was overseeing its business in India at that time. It set up an employee assistance programme for workers at the facility, and a 24-hour grievance hotline in Kannada, Telugu, Tamil, Hindi and English.  "For the past eight weeks, teams across Apple, along with independent auditors, have been working with Wistron to make sure the necessary systems and processes are in place at their Narasapura facility," Apple told Reuters in a statement on February 9, after the Times of India first reported the news of Wistron preparing to restart its plant. “Wistron remains on probation and we will monitor their progress closely,” Apple said.  The violations by its suppliers marred an otherwise stellar quarter for Apple, which beat analysts estimates for sales and earnings. CEO Tim Cook told investors last month that Apple doubled its sales in India for the quarter ended December 26 from the year-ago period, while its absolute market share was only about four percent. Apple opened its online store in India in September and expects to open physical retail stores as well, starting with one in Mumbai.  India became more attractive as a manufacturing location after the government offered a production-linked incentive plan. The Ministry of Electronics was the first off the block last year, approving proposals by 16 smartphone related manufacturers to set up or expand operations in India. Three of them were Wistron, Foxconn and Pegatron. Wistron and Foxconn are already present in India and are expanding their operations, while Pegatron will soon come into the country.  Apple started assembling iPhones in India in 2017—the original iPhone SE through Wistron’s older factory in Bengaluru. Subsequently, every year, models were added, including the iPhone 6s, iPhone 7, then the iPhone XR—which Foxconn started assembling in Chennai in 2019—and last year, the iPhone 11.  Exports from India have already been happening, starting with the iPhone SE, but exports are currently a small proportion of what is assembled in the country. Wistron is said to have committed Rs 3,000 crore for its Narasapura facility, according to reports from 2018 when the Karnataka government gave it land for the factory. The plant was estimated to create some 10,500 jobs at the time.

Tweets by @forbes_india
Recast Labs: Your Personalised Dermo-Cosmetics professional
China scores a public relations win after WHO mission to Wuhan