For Perfetti in India, it's Happy and No Dent 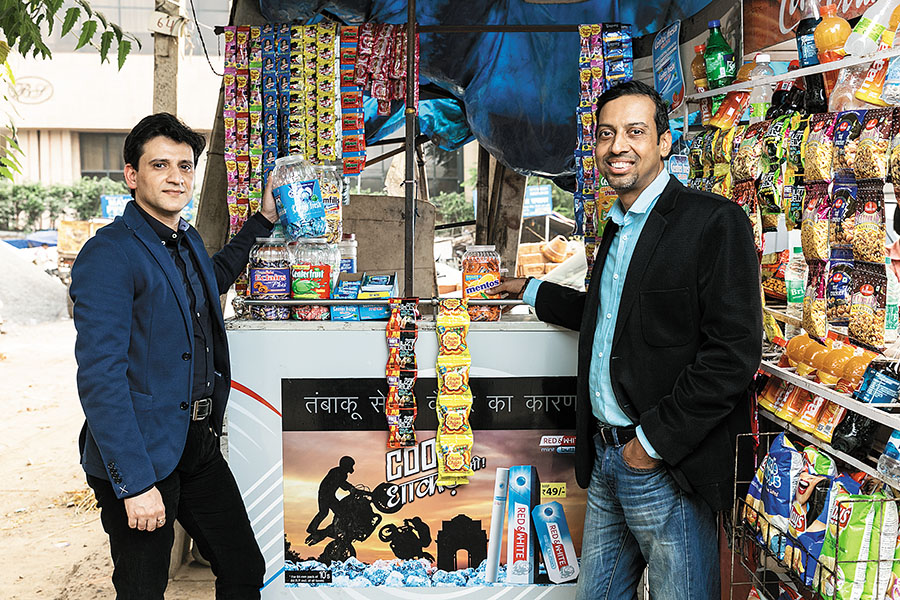 It was sometime in October 2017. The change of season in Delhi—winter was about to set in—coincided with winds of change blowing strongly across the India operations of Italian confectionery major Perfetti Van Melle. Over 200 staff, gathered at a hurriedly-called town hall in a five-star hotel in south Delhi, had a whiff of what was coming. The buzzword was transformation. While the employees were on the edge, the top management had its task cut out. Perfetti, the maker of Happydent, Center fruit and Center fresh chewing gum brands, had seen muted growth over the last three years, with sales crawling from fiscal 2015; in 2017 they stood at ₹1,700 crore, just ₹10 crore more than the number in 2015. This was in stark contrast to the double digit growth rates Perfetti was accustomed to since its India debut in 1994. However, a deadly cocktail of demonetisation, tepid rural demand, a slowing economy and rising commodity prices was taking a toll. The company needed a reboot.

The immediate task for Rajesh Ramakrishnan, who was shifted from Bangladesh to India as chief transformation officer in August 2017, was to ease the nerves. “It was a growth-oriented strategy, not a cost-cutting one,” recounts Ramakrishnan, who was elevated as India managing director (MD) last July. The much-anticipated town hall address started. The then MD Ramesh Jayaraman didn’t cut any slack in the assessment of the grim situation. “Growth,” he sternly pointed out, “had started to slow down and there was pressure on profitability.” There is a need to rethink, he continued, about the way the company is dealing with the business. Employees, on tenterhooks, expected pink slips. However, Jayaraman allayed those fears. “We are trying to transform ourselves,” he underlined, into a company with sustainable and profitable growth. Sparkle, the project on which the business transformation plan hinged, had been flagged off. Cut to 2019. Sparkle is now making Perfetti happy by ensuring there is no dent in growth. The company closed fiscal 2019 with a revenue of ₹1,847.9 crore, around 10 percent more than the previous year. Leadership has been consolidated in key categories like gums, jellies and mint, and the retail footprint now stands at 4 million outlets indirectly and almost a million outlets directly. In 2017, the corresponding number for direct outlets stood at 650,000. Sparkle, insists Ramakrishnan, was designed to reignite the spark. “The idea was to make the business grow faster, and make it more profitable. And it has delivered,” claims the 50-year-old MD, without revealing profit numbers. 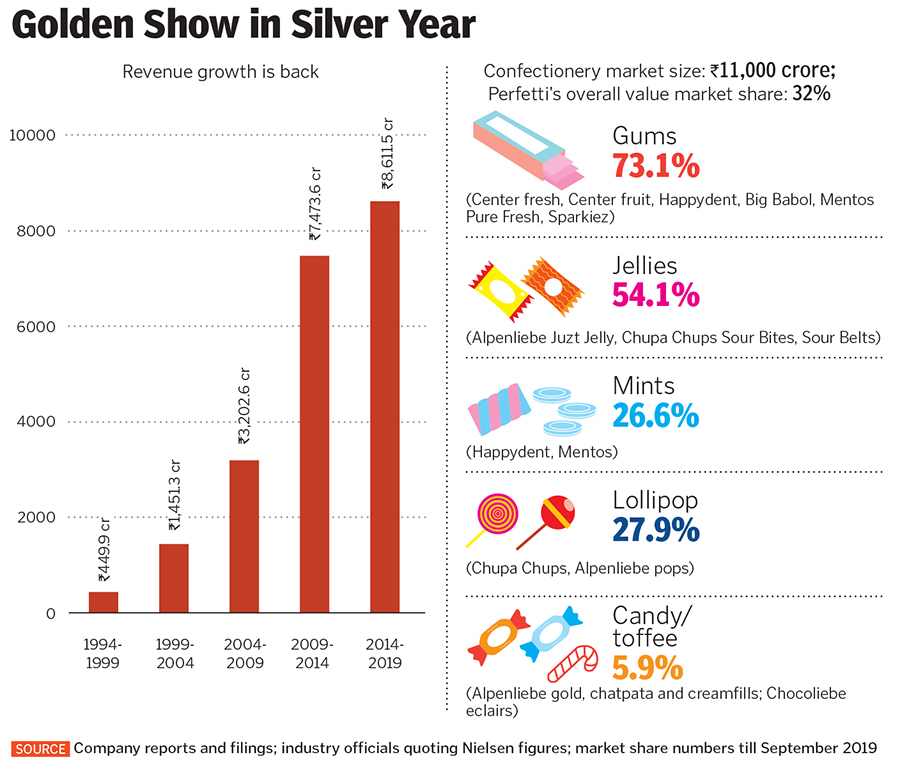 ABC OF TRANSFORMATION
The turnaround began three years ago when global management consulting firm BCG was roped in. The blueprint outlined the areas that needed attention such as focusing on power brands, understanding consumption behaviour of consumers, and positioning brands on the basis of demand spaces to enable sharper targeting and ensure that the various brands don’t overlap. Other suggestions included benchmarking Perfetti’s RTM (route to market) with other companies and understanding opportunities to improve efficiency of coverage, use best practices to reduce operating costs and improve productivity. The transformation, under Sparkle, started with the creation of power brands. “Earlier there were a plethora of brands,” recalls Ramakrishnan. The idea, he lets on, was to focus on the top brands—Center fresh, Centre fruit and Happydent in the gums category and Alpenliebe, Alpenliebe Juzt Jelly and Chupa Chups in non-gums. Once the power brands were identified, the next task was to undertake market mapping, segmenting strategy and brand portfolio positioning. While different products are consumed for different reasons, the idea was to get a sense of who consumes what kind of products, when and where. Seven distinct confectionery demand spaces or segments were identified on the basis of segmentation of Indian consumers’ functional and emotional needs. Perfetti decided to play in five segments. For each brand, the company identified the space it would operate in. Take, for instance, the segment of ‘refreshing break’. The brand Center fresh was selected to play the role of an anchor in this segment. Reason: With its mint flavour, Center fresh was well-positioned to give ‘fresh breath confidence’. Similarly for the segment of ‘Cheer Me Up’, Center fruit was shortlisted as its depiction of a fruity explosion showed a strong fit with mood upliftment and fun. For the third segment—sweet indulgence—Alpenliebe was best placed due to its caramel taste. For the remaining two categories—fun moment with friends and fun moment with family—Chupa Chups and Juzt Jelly, respectively, made the cut. The exercise enabled Perfetti to understand different consumption needs such as home versus out of home, indulgence versus refreshment, and kids versus teens and young adults. The next logical step after the need and space understanding was repositioning the brands. Take, for instance, Center fruit, whose brand communication was always built on a platform of irresistibility. However, it was felt that, over a period of time, irresistible taste had become generic to the category; most candies were likely to be irresistible in taste. “So Center fruit was repositioned as a brand that can play the role of a mood transformer,” informs Ramakrishnan. Center fresh too underwent a rejig. While earlier the brand stood for freshness, now another layer was added to it: Fresh breath. The idea was to narrow down the positioning. The second bucket of the transformation was to beef up the go-to-market strategy by adding more technology. “We needed to find more efficient ways to cover outlets,” Ramakrishnan lets on. The solution devised was simple: Re-mapping of the outlets via geotagging. Every single outlet of the 1 million overall was geotagged by latitude and longitude. The sales team of over 2,000 was equipped with a hand-held device so that real-time data could be collected and analysed. The intent was to get more visibility to the sales and draw sharper insights out of the data for better decision-making. Take, for instance, Alpenliebe lollipop. The brand sells more in South India. Similarly, some of the biggest markets for Center fresh are Tamil Nadu and Andhra Pradesh. Fruit brands, it was discovered, sell more in the north and the east. “A lot of work went into the second bucket,” he informs. Perfetti today, he points out, is available in around 4 million outlets. The third bucket of reform included efforts to unlock value in the system by finding ways to get more efficiency and productivity in operations and supply chain. One way to do that was by introducing the concept of reverse auction in procuring ingredients, supplies and logistics. Perfetti also undertook time and motion studies across its factories to understand how many people are required in each line of production for efficient utilisation of manpower.

STICKING WITH INNOVATION
The fourth bucket is one that hasn’t changed since inception: Obsession with consumers, which leads to innovation in products. “It’s ingrained in the DNA of Perfetti,” says Rohit Kapoor, director-marketing at Perfetti Van Melle India. The company, he claims, has not just launched many first-of-its-kind products by understanding consumer needs, but it has also anticipated consumer needs. For instance, back in 1994 when Center fresh was launched, it was the first liquid-filled gum in India. The trend continued over the next two decades, including this year when Center fruit Chatpata Sparkiez was rolled out as India’s first chewing gum in a tangy flavour. In terms of marketing push, Perfetti started building a modern trade assortment, and focusing more on ₹5 and ₹10 packs. “Today high-value packs contribute almost one fifth of our sales,” says Ramakrishnan. The transformation at Perfetti, reckon marketing and branding experts, has helped boost trials, build on existing products, expand the market, and increase volume of consumption. “They ran a high-profile campaign to get chefs and influencers to create unique recipes using Juzt Jelly as an ingredient,” says Jessie Paul, founder of Paul Writer, a marketing advisory firm. The brand also launched an ice cream flavour in collaboration with Baskin Robbins. All these efforts, she adds, helped boost trials and increase consumption of confectionery, which is still perceived as an occasional treat for children. Cadbury, Paul adds, tried something similar in 2012 with its ‘Cadbury Mishti Shera Shrishti’ campaign. The brand tied up with leading mishti (sweet) shops in Bengal and got them to craft sweets using Dairy Milk. Perfetti, says, Abraham Koshy, professor of marketing at IIM-Ahmedabad, is a good example of a pioneer brand with stamina. “The brand innovated with interesting products and stayed in the market without quitting,” says Koshy. Investment in market building through expansive distribution that penetrated even the small retailers and developing interesting advertising campaigns helped it become a leading brand. Advertising, he adds, added zing to the brands under its portfolio. “Being jovial and light-hearted—Center fresh, Center fruit and Happydent—helped the brand resonate well with consumers across all ages,” says Koshy, who also lists out potential challenges for the leader: Geographical expansion and moving into unserved markets will test its character. Confectionery, Koshy underlines, has become an extremely competitive market where Perfetti faces a tough fight from two kinds of players. The multinational companies and homegrown biggies such as Wrigley, Mondelez, ITC and Parle. Then there is a huge battery of regional players who play on price points and margins. “Perfetti needs to keep innovating so that it has top-of-the-mind recall,” Koshy says, adding that maintaining the pace of innovation is not easy. Ramakrishnan, for his part, is betting big on the four pillars of Perfetti to counter any threat: Differentiated products, iconic brands, product availability at arms’ reach and passionate people. While conceding that the difficult part for any leader is to stay at the top, he contends that the company has a track record of maintaining its stronghold in India, and playing to its strengths. “Our strength is candies and chewing gums, and that’s what we would like to stick to,” he says, dismissing any idea of diversifying into unrelated categories. Without putting any revenue target for the company, Ramakrishnan underlines the intent of the company to stay aggressive. “Our ambition is to continue to grow faster than the category. That’s the most critical thing.”