How Trump is undoing the Obama legacy

The US President has rescinded his predecessor Barack Obama's nuclear agreement with Iran. Here's a look at some of the other key Obama-era legislations that Trump has sought to overturn 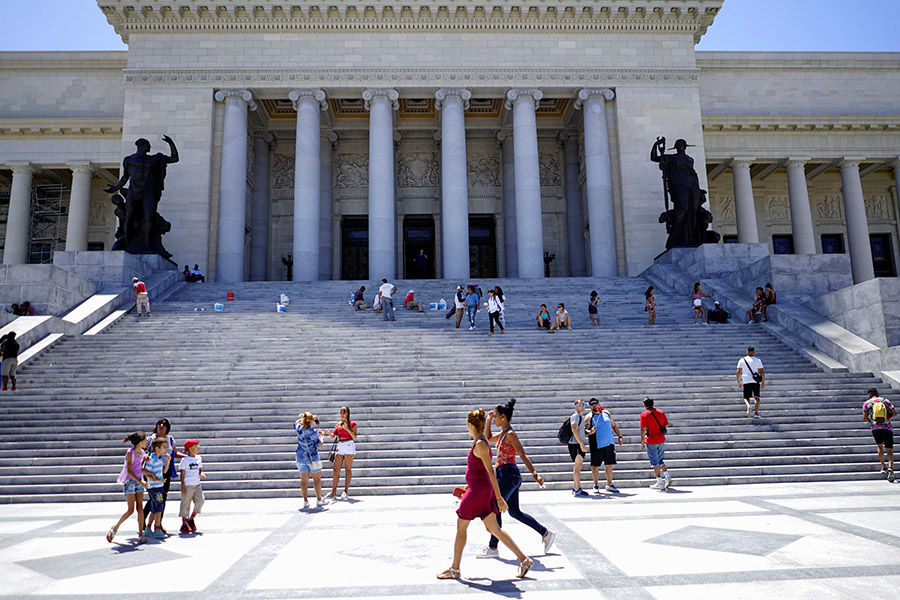 Tourists walk in front of the main entrance of the Capitol in Havana, Cuba. President Donald Trump re-imposed travel and trade restrictions on Cuba in 2017 after they were lifted by his predecessor Barack Obama in 2014
Image: Alexandre Meneghin / Reuters

GLOBAL WARMING: Last June, Trump pulled out of the Paris climate agreement, a landmark deal through which the US pledged to cut by 2025 its greenhouse gas emissions 26 to 28 percent below 2005 levels. Trump dubbed the deal, signed by 195 nations in 2015, “draconian” as it will kill jobs and businesses in the US while benefiting developing nations like India and China. He later expressed his willingness to re-enter the Paris agreement should its terms be tweaked to favour the US, but hasn’t yet spelt out what he has on his mind.HEALTH CARE: The Affordable Care Act floated by former US President Barack Obama came in Trump’s line of fire within hours of being sworn in. He signed an executive order to lessen the financial burden of “Obamacare” that made insurance compulsory but affordable through state subsidies. Trump slashed its advertising budget by 90 percent, gave citizens only six weeks instead of three months to sign up on the federal exchange and reduced by 40 percent federal support for counsellors who helped people enrol for the services. In October, the administration stopped paying subsidies to reimburse insurers for the reduced out-of-pocket costs for Obamacare enrollees.IMMIGRATION: Last September, Trump decided to terminate a 2012 scheme launched by Obama to protect from deportation undocumented immigrants brought to the US as children. The Deferred Action for Childhood Arrivals programme, or Daca, gave nearly 800,000 men and women (called Dreamers) permits to work in America legally, provided they came to the US before they were 16 and had a crime-free career. Trump had called the programme an “illegal amnesty” during his presidential campaign. While the courts have ruled that the programme can stay on as of now, Trump, in April, declared it dead.   CUBA: Three years after Obama ended the US’s 50-year diplomatic isolation of Cuba, and visited the country (in 2016), the first American president in 88 years to do so, Trump cracked down on business with and travel to the Central American nation. While independent educational, cultural or “people-to-people” trips were barred, unless accompanied by a US-based tour guide, the State Department also came out with a list of 180 no-go entities for Americans that are believed to financially benefit from the Cuban military, intelligence and security services. Trump’s diktats have seen a drop in US travellers to Cuba, leading to a 7 percent slide in foreign visitors in the first three months of 2018. NET NEUTRALITY: Trump’s Federal Communications Commission, led by his pick Ajit Pai, voted in December to repeal Obama’s Open Internet Order that required internet service providers to treat all online traffic equally. The reversal of the 2015 order, which preserved the right to equal access to the internet, gives companies power and freedom to charge users more money to visit certain websites or use certain apps. A number of Senators, this week, moved a petition to vote on the controversial repeal. It could mean the beginning of a fightback, or an end to net neutrality in the US if both Houses fail to pass the resolution. IMMIGRANT WORK PERMIT: In 2015, Obama signed an executive order that allowed the spouses of H1-B visa holders to work and open a business in the US through an H4 dependent visa. Now, the Trump administration is planning to revoke the rule in order to promote the “Buy American, Hire American” order that Trump signed in April 2017. Since 2015, the United States Citizenship and Immigration Services has approved over 100,000 work permits for H-4 spouses. Once the executive order is rolled out, their fate will hang in limbo as it’s unclear whether it will be implemented with retrospective effect.