Rural demand was keeping FMCG sector optimistic. Will the trend hold up in the second wave?

As Covid-19 spreads, the next wave is likely to hit smaller towns and rural areas harder; FMCG companies will have to contend with supply disruptions and demand reduction 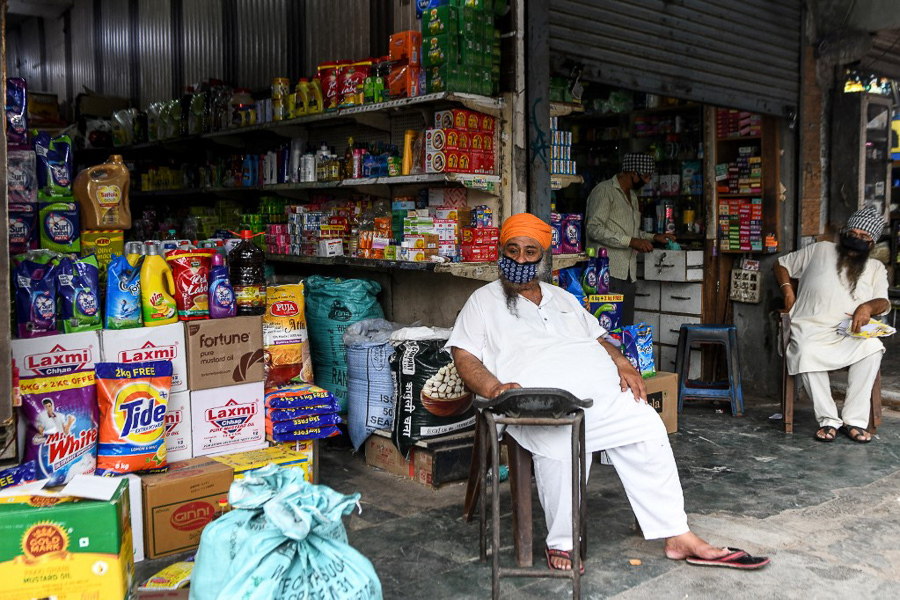 Small markets are important testing grounds for companies for new products and provide data on how much price elasticity is there for their goods.
Image: Narinder Nanu/AFPAs results from consumer goods companies start trickling in, rural demand, which forms a subset of their performance, has attracted disproportionate investor interest. Demand from smaller towns and cities had fared exceedingly well last fiscal but is likely to come under some strain as the second more deadly wave of Covid-19 spreads across smaller towns and cities.
One reason why demand for soaps, shampoos and detergents sold in small Rs5-10 pack sizes is important is because it is often seen as a weathervane on the direction of the economy. It slows during periods of distress and usually ratchets up when there is a good harvest or there are cash transfers from the government. The last fiscal saw both these factors in play. As a result, consumers were able to spend more on daily necessities.
These markets are also important testing grounds for companies for new products and provide data on how much price elasticity is there for their goods. Consumers start with smaller packs and graduate to larger ones which bring in higher margins for companies.
Rural consumers are also generally the first to downtrade when times are bad. When demand slackens it becomes harder for companies to forecast the future of some segments. These markets are also important for companies as they typically grow faster than their urban counterparts. In the past Hindustan Unilever has said that rural consumption was growing at 1.5 times urban consumption, albeit from a lower base.
Hindustan Unilever, which announced its results on April 29, was cautiously optimistic on how demand from the hinterland would fare. At a results press conference Sanjiv Mehta, chairman and managing director of HUL, pointed out that the first quarter of fiscal 2021 saw a complete lockdown that resulted in no movement of goods. Things are different this time around with states announcing shorter, intermittent and localised lockdowns. While this results in planning difficulties, personnel and goods can still move. He also pointed to the absence of pantry loading as a factor that indicates lesser fear. More concerning is the impact of localised lockdowns in smaller towns, which lack infrastructure for home deliveries resulting in lost sales. 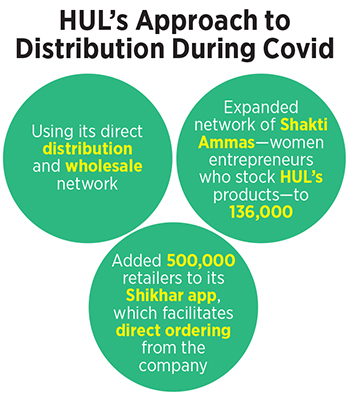 His view was echoed by his counterpart at Britannia, Varun Berry, which announced results on April 27. “Consumer demand trends are similar to last year but the world has got used to living through a pandemic,” said Berry, managing director at Britannia. Small-ticket consumption is unlikely to be impacted severely.
Mehta, who declined to comment on a longer-term rural trend, said, “While the last two weeks have seen turbulence it is too early to say what long-term impact it would have.” The company did say that there have been a fair number of personnel who have been infected with Covid-19 and that it is working on vaccinating all its 300,000 employees and their families quickly.
As disruptions have increased over the last year companies have found their own coping mechanisms. At HUL the effort is three-pronged. The company has used its rural direct coverage reach to better channel sales to the hinterland. It expanded its network of Shakti Ammas, women entrepreneurs who stock company products, by 16,000 taking the total to 136,000. They serve over 100,000 villages. And it added 500,000 retailers to its Shikhar app which facilitates direct ordering from the company. This is in addition to the wholesale channel that the company operates.
Last year saw a large part of urban demand shifting to rural India as workers who would have otherwise consumed in cities bought the same soaps and shampoos in their homes across the hinterland. So, in effect, there was some amount of shifting of consumption although companies and market research agencies have been unable to quantify how much of a shift in demand that resulted in. For now, market forecasters have not released their medium-term outlook as their surveys have slowed on account of the Covid-19 infections.
The key to demand this year could be how well rural incomes hold. Last year saw cash transfers in the form of free ration handouts. This year the central government has provided 5kg of foodgrains in May and June at a cost of Rs26,000 crore. Some states like Maharashtra have also said they would provide income support to construction workers and autorickshaw drivers. “We expect rural incomes will be sheltered. Some of the migrant population is going back but it is nowhere are severe as last year,” says Rahul Bajoria, chief India economist at Barclays plc.
Going forward, consumer companies are not only keeping a close eye on demand trends but also on inflationary pressures that have started ticking up. Tea, for instance, has seen prices rise. Palm oil prices have risen too. “While these are moving in a cyclical fashion it is too early to conclude whether they will remain elevated for a while,” said Mehta. The company may end up making calibrated price hikes in the next few months.