Four years from now, smartphones will remain one of the most important categories in Indian e-commerce, if not the most important. Whatever else happens, this is the category that will decide the winner, reason executives such as CEO Kalyan Krishnamurthy. Game on 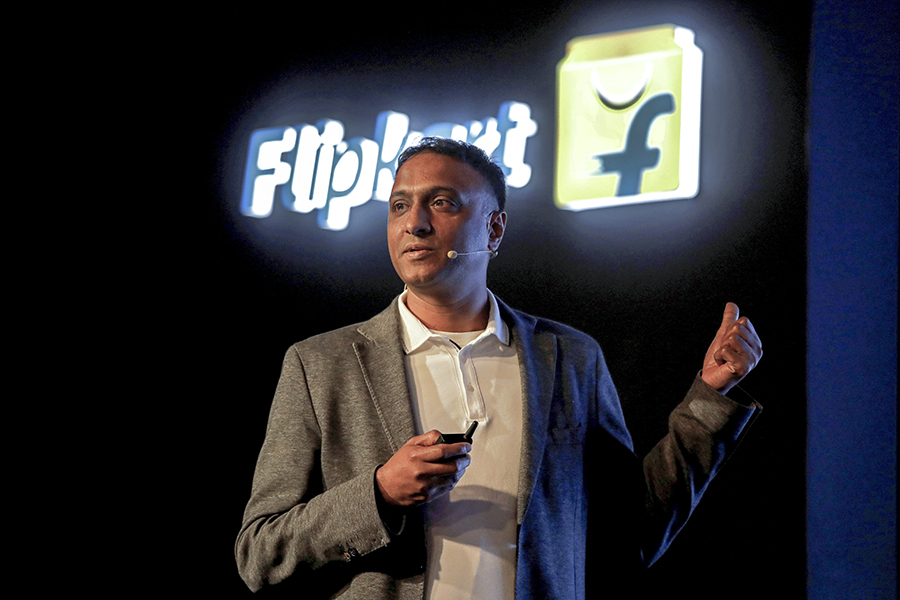 Flipkart's Chief Executive Officer (CEO) Kalyan Krishnamurthy addresses the media at a news conference in New Delhi, India, April 17, 2018
Image: Saumya Khandelwal / Reuters
So Jerry Shen, CEO of Asus, was in Bengaluru on Tuesday, for Flipkart’s ‘Big’ reveal that the e-commerce company’s top boss Kalyan Krishnamurthy had been teasing out in a video recently.

There were two announcements, or rather one, and a statement-of-ambition, which were kind of related. The ambition is for Flipkart to dominate the Indian smartphone sales scene by 2020. The announcement was about a partnership with Asus to further that ambition.If this all sounds ra ra and not much substance — and given Taiwan’s Asus, an excellent maker of laptops too, among other things, lags China’s Xiaomi and Lenovo in India — Krishnamurthy laid out the plan, and here is what he didn’t say: dominate the smartphone sales market, and you get a fair shot at dominating the Indian e-commerce market itself.

In other words, he is boiling down the whole effort of taking the online commerce game away from Amazon to just one objective: win the smartphone sales competition by as wide a market-share margin as possible. Flipkart’s initial target, then, is to commandeer 40 percent of all smartphone sales in the country by 2020, Ajay Yadav, Flipkart’s vice president for mobiles and larg, appliances, said in a presentation. That share is about 25 percent today, according to the company.

Also Read: Jeff Bezos' relentless pursuit of IndiaToday the overall retail industry in India is about $600 billion. Industry projections push that to $1 trillion in the next few years. However, the e-tail market in India is very small, tracking to about $15 billion this year. “Conservatively, we estimate that it’s going to be $60 billion,” over the next three to four years, Krishnamurthy said. In 2017, that was about $10 billion.

Therefore, over the next three to four years, the expectation is that at least $50 billion will be added to the online commerce market in the country. Of that, 40 percent is still expected to be mobiles and electronics, and 29 percent will continue to be represented by mobile phones, making smartphones one of the most important categories in e-commerce in India, if not the most important one.

Fashion comes next, and it’s “getting bigger and bigger.” It also plays the larger role of customer acquisition, but in pure sales value, smartphones will continue to be the most important category for businesses such as Flipkart and Amazon in India, Krishnamurthy expects.

In the last five years, the internet has taken over smartphone sales in India. From about one in seven in 2012, online sites now account for every other phone sold, Krishnamurthy pointed out. And some 80 million smartphones were sold in India in 2017. “This is the power of e-commerce, by far the highest adoption example,” and the trend will only accelerate, he said.

Another specific example he gave was that of smartphones equipped with 3GB of RAM, the semiconductor memory component that the phone’s processor uses for its ongoing operations — like loading an app when one taps on its icon on the screen. Flipkart estimates that of those who bought such phones, about 55 percent of the customers had paid over Rs. 10,000 each for their handsets and the rest had found phones with that much RAM for less in 2017.

In 2018, Krishnamurthy pointed out that the price of such phones had more or less uniformly fallen below the 10k mark. This is another example of how value is being generated, as one goes into the future, he said. Higher quality phones are becoming available at incrementally lower cost.

The bigger picture, according to Krishnamurthy is as follows: “We are one of the biggest domestic markets in the world today, it’s one of our biggest assets we have as a country.”

India’s internet user base is in the range of 350 million to 400 million people and in the next 3-4 years, that is projected to go to about 660 million consumer internet users. “At that time, we’ll actually be where China is today, or very close to that.”

“Each one is in the multiples of $100 billion,” as an opportunity, Krishnamurthy said.

In the meantime, Flipkart expects to marry its consumer insights — remember the 10TB of data a day it collects every Big Billion Day annual sale — with Asus’s tech prowess and actually launch a new line of phones in India: to be made by Asus, and sold via Flipkart.

Tweets by @forbesindia
Rohingya crisis: Images that won the Pulitzer Prize
Using big data: 3 reasons it fails and 4 ways to make it work