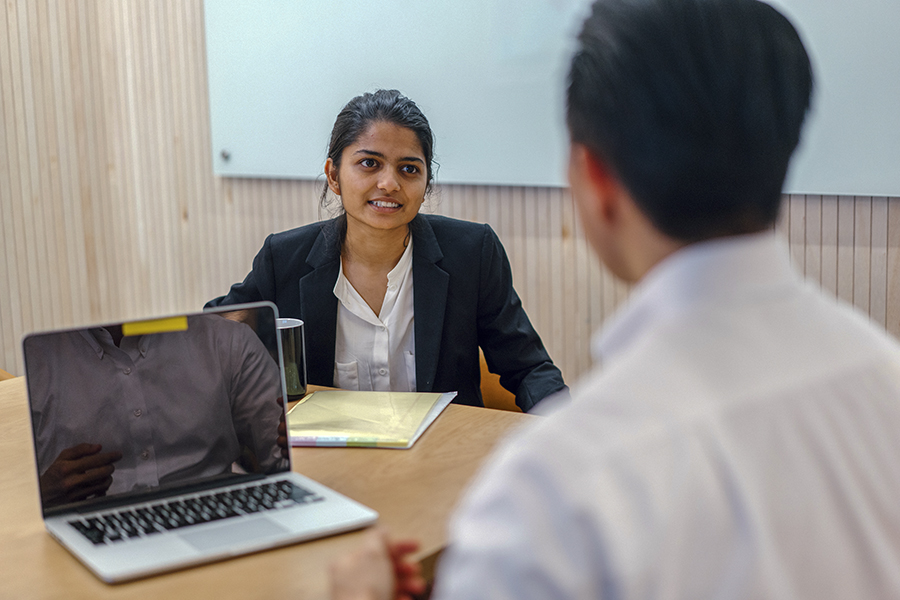 Women in male-dominated fields who “act like men” elicit a backlash.
Image: Shutterstock

A take-charge attitude at work typically earns men positive performance reviews, but for women, assertiveness only gets them so far. Although workplace evaluations are supposed to be merit-based, gender bias too often influences how supervisors rate employees, resulting in women having to meet a higher bar than their male colleagues to advance professionally.

These are the findings of a new study coauthored by Shelley J. Correll, a professor of organizational behavior (by courtesy) at Stanford Graduate School of Business. Published in the American Sociological Review, Correll’s paper pinpoints how and when managers’ beliefs about gender creep into their evaluations of workers.

The team meticulously coded the language used in performance reviews of employees at a Fortune 500 technology company and analyzed the numeric ratings on worker evaluations. Using the “viewing and valuing social cognitive processing” model, the scholars identified which employee behaviors managers noticed (viewed) and which ones they rated highly (valued).

“We want people to realize that when you’re evaluating someone, you are not just documenting their behavior, as if you’re some kind of computer,” Wynn explains. “You are interpreting their actions, and there’s a question about whether there’s bias in what you notice, what you remember, and how you categorize someone’s behavior — how you are, in essence, viewing their behavior. And then there’s also bias in the value you attach to those behaviors and how you assign rewards based on whether you think someone’s behavior is good or bad. Bias can enter into any of those processes.”

The study found that a poorly defined evaluation process opens the door for gender biases to shape performance evaluations, because managers too often perceive the same behaviors differently based on whether a man or woman engages in them. In male-dominated jobs, such as those that entail leadership or technical skills, the gender bias in favor of men is measured to be even greater.

“What we found is that managers are going into a process where they have to evaluate someone, but they don’t have a clear sense of what exactly they’re supposed to be doing,” Correll says. “The criteria they’re using might be undefined or unclear. It might be that they have criteria, but they don’t have a good way of measuring them. So they draw on cultural ideas about how different kinds of people are.”

Women in male-dominated professions can’t simply “act like men” to get ahead, because doing so elicits a backlash, the researchers found. While exhibiting competence and confidence does not hurt female professionals, openly engaging in confrontations or pursuing positions of power evoke negative reactions from supervisors. These behaviors can lead to critiques designed to get women to fall in line with gender norms, which is known as “gender policing.”

But when women indirectly pursue a promotion by having someone higher up in the company advocate on their behalf, their chances of earning top ratings increase. Of course, to benefit from such a situation, women need to have already established relationships with upper-level managers.

Supervisors do notice when women behave in ways that conform to gender conventions but do not always reward women for these actions. Women get higher marks on reviews for having “likable” personalities, but they enjoy few gains for demonstrating “communal” behavior, such as being helpful or considerate of their colleagues.

“We saw that women were more likely to be seen as communal than men were, but it did not, for men or women, lead to the highest rating,” Correll says.

Managers simply don’t value this characteristic as much as they do traits typically associated with men, such as having a take-charge attitude or being a visionary. Even when women are viewed as visionaries, they don’t earn higher ratings on evaluations, suggesting that managers don’t weigh female brilliance as heavily as they do that of males.

And when evaluators note on a review that a woman needs to improve her technical skills, she suffers professionally, while a man can exit the same scenario unscathed.

Although women clearly suffer when gender biases frame performance reviews, so do men. Men in the workplace who fail to take the initiative or exude confidence are often perceived as being “too soft.”

While having an advocate in the workplace can help women make important professional gains, the same isn’t true for men, and this isn’t the only area where women appear to have an advantage over their male colleagues. Other studiesopen in new window have shown that managers view men who have only part-time work experience as less hirable than women with the same part-time work experience — all due to gender expectations that label men as household breadwinners.

Examined more closely, some of the benefits women have in the workplace don’t actually give them an edge. For example, the researchers found that managers hesitated to overtly criticize women, even when needed. Their reluctance may stem from the fear that they would be accused of being unsupportive of their female employees. While managers refrained from using harsh language to judge women’s performances and often couched the criticism with light praise to soften the blow, this proved deceptive because they went on to give the same women lower ratings that didn’t correspond with the remarks on the evaluation.

“If men are given critical feedback, it’s developmental,” Correll says. “They’re told, ‘In order to get promoted you need to do X or get on Team Y.’ But for women, the feedback tends to be more vague, which turns out to be less helpful.”

The researchers expect that regardless of a manager’s gender, these sorts of biases infiltrate the process when evaluation protocols lack clarity and transparency. “We all live in the same world with the same stereotypes,” Correll says.

How to fix it?

Although societal stereotypes persist in the workplace, some evaluation formats are able to bypass managers’ gender biases. Tying evaluations to performance, ensuring that the process is transparent, and holding managers accountable for reviews can reduce the likelihood of gender stereotypes influencing the process, the researchers say. It’s also important to make sure managers have clear criteria for evaluating employees and that those criteria are applied consistently across all employees.

“Those are the kinds of things that will make sure that there’s less bias,” says Wynn, “and that it’s not an open box where managers can just say whatever they want about an employee.”