Those afflicted by orphan diseases are rare; companies looking for orphan drugs are rarer still. Among them is Aten Porus that has found early success in this uncharted region of medical science 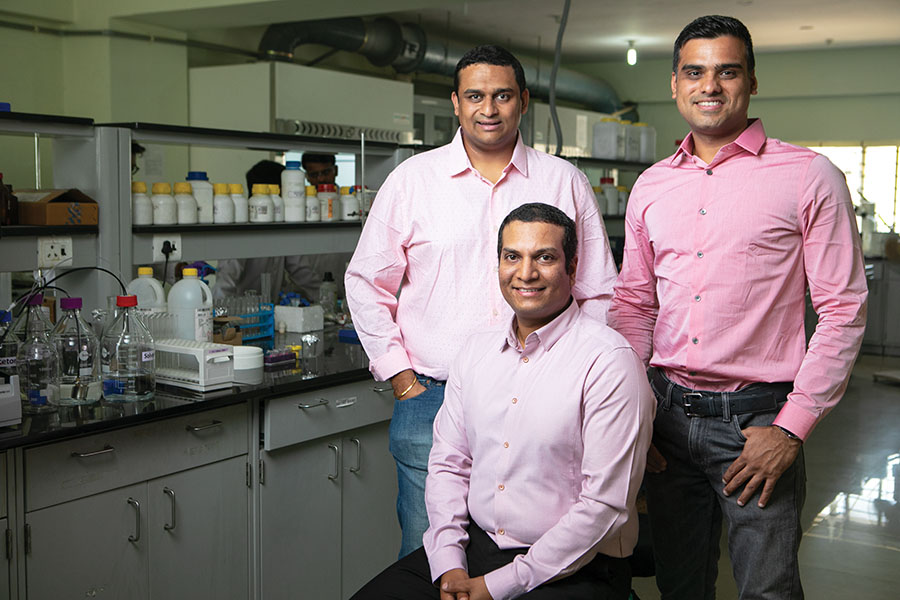 Arun Papaiah (extreme left), founder and CEO, Aten Porus, with Srinivasan Namala (centre), founder and director, and Aditya Kulkarni, founder and chief scientific officer, Aten Porus
Image by: Selvaprakash Lakshmanan for Forbes India
Throw the names Pompe, Niemann-Pick or focal segmental glomerulosclerosis at a medical practitioner and chances are that he/she may not have heard of it. These obscure illnesses are part of an estimated 7,000 afflictions classified as rare, or ‘orphan’, diseases. Most of them are life-threatening ones. The lack of resources for, and information about, orphan diseases puts them in the uncharted territories of medical science.

Aditya Kulkarni, 33, was drawn to this arcane area of medical research, while pursuing a PhD from Purdue University in the US. “These diseases are a challenge the world over,” he says, “and certainly in India.” Kulkarni estimates the country may have as many as 7 crore people suffering from some rare disease or the other.

He commenced professional work in the area, along with college mate Arun B Papaiah, 33, soon after his return to India in 2012. Kulkarni and Papaiah had bonded as undergraduate students of science in Bengaluru over 12 years ago.

The former then pursued higher specialisations in science—a master’s degree in Britain, before specialising in organic and bio-organic chemistry at Purdue—while the latter travelled to Australia to earn an MBA. 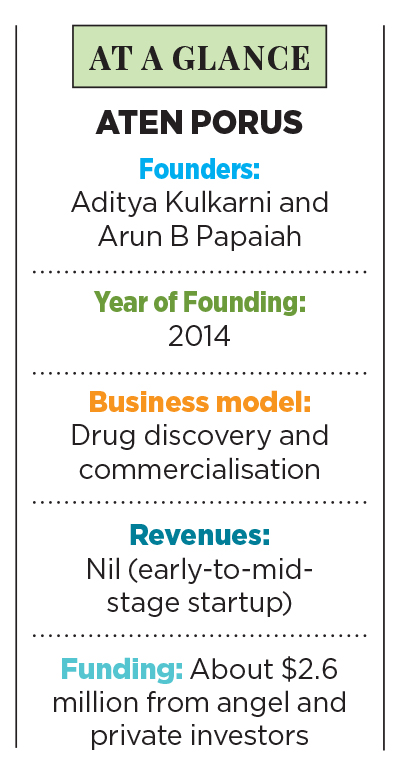 In 2012, the two were ready to combine their diverse expertise to build a venture. They agreed to focus on rare diseases, despite the challenges—patient population can be as small as 100 people globally for an orphan disease; most are fatal, 70-80 percent are genetic and they mostly afflict children. The low patient population is a deterrent for drug manufacturers as cost recovery becomes difficult.

These were the formidable hurdles when the duo founded Aten Porus Lifesciences in 2014 in Bengaluru, after a year of studying the landscape in India, including meetings with people in the pharmaceutical industry.

Despite the evident business risks in drug discovery for rare diseases, there are precedents for success like that of US-based Genzyme, which was acquired by French pharma giant Sanofi for $20 billion in 2011. The previous year, Genzyme had developed a drug for Pompe. The rare disease is characterised by the degeneration of muscle and nerve cells in the body due to excessive accumulation of glycogen, and plagues an estimated 5,000-10,000 patients globally.

With Genzyme’s drug, the treatment costs about $200,000-300,000 per year and the patient has to take the medicine lifelong, says Kulkarni, who is chief scientific officer at Aten Porus. The prohibitive costs make such drugs inaccessible and pharma companies have evinced little interest in the segment due to the small patient population. This is despite regulations like the US’s Orphan Drug Act of 1984, which incentivises research in this area.

In the last decade, however, deep-pocketed multinational pharma giants, in search of new revenue streams, have jumped in. This has been mostly through the acquisition route—in May, Japanese drug maker Takeda Pharmaceutical agreed to buy London-listed Shire Plc in a $62-billion deal—though some companies have also started their own research, Kulkarni and Papaiah say. 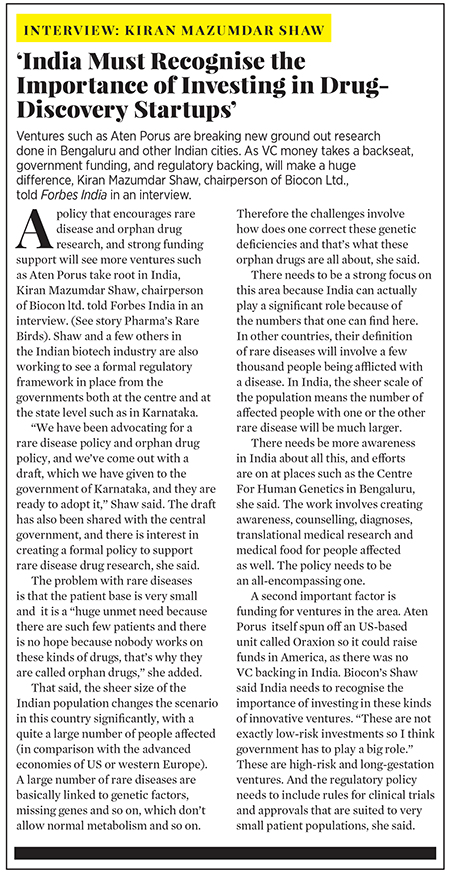 Exceptions apart, drug discovery in orphan diseases is a dormant area of medical science. In India, there isn’t a policy that can aid or abet research in these fields, says Kiran Mazumdar-Shaw, founder of the biopharmaceutical company Biocon, about Aten Porus’s efforts. She, along with a few like-minded others in the biotech industry, have submitted a set of recommendations to the Karnataka government.

She also drives home the point that there is little venture capital (VC) interest in India for such efforts. Aten Porus had to approach the US market to raise more money and spun off a US subsidiary [Oraxion Therapeutics] in 2016 for the purpose. “It’s a bold bet by Aditya and Arun to be doing their work in India,” she tells Forbes India.

But fortune does favour the brave. Aten Porus found an investor early on in Srinivasan Namala, CEO of Porus Labs, one of the few VCs willing to back its efforts. Papaiah recalls they had by then received their first grant (₹50 lakh) from India’s department of biotechnology; a second grant followed. But it was Srinivasan’s $1 million that set the ball rolling. Aten Porus has also raised an additional $1.4 million from US investors through Oraxion.

In February, Oraxion announced it had entered into a deal with an undisclosed US-based biopharmaceutical company to licence its lead drug ORX-301 for the treatment of two rare diseases—Niemann-Pick Type C disorder (NPC) and focal segmental glomerulosclerosis. (The former is a severe neuro-degenerative disease and the latter an ailment of the kidneys). The total aggregate payments under the agreement could be as high as $125 million, in addition to royalties and sales milestone payments, according to a press release.

Kulkarni says: “My PhD was in modifying molecules for gene therapy and drug delivery. Among the molecules I had worked with was HP Beta CD, which had proven applications in treating NPC. I decided to modify its pre-cursor [to create what is now the proprietary molecule ORX-301].” 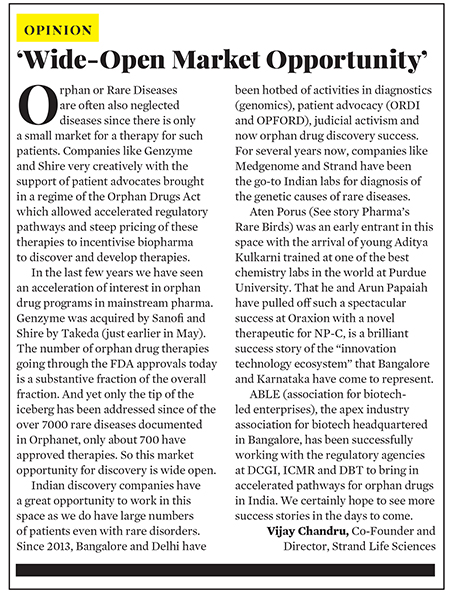 “That Aditya and Arun have pulled off a novel therapeutic for NPC is a brilliant success story. Indian drug discovery companies have a great opportunity in this space,” says Vijay Chandru, co-founder and director, Strand Life Sciences, a global bioinformatics and genomic profiling company. He adds that ABLE (Association for Biotechnology-Led Enterprises), the Bengaluru-based apex body for biotech firms, has been successfully working with regulatory agencies to bring in accelerated pathways for orphan drugs in India.

Once that is done, the pipeline of treatments for orphan diseases can only expand. And Aten Porus is well-placed to reap the benefits along with those affected by orphan diseases.

Tweets by @forbesindia
Does the market need your startup?
Fingerlix: Finger on the pulse