Fingerlix: Finger on the pulse 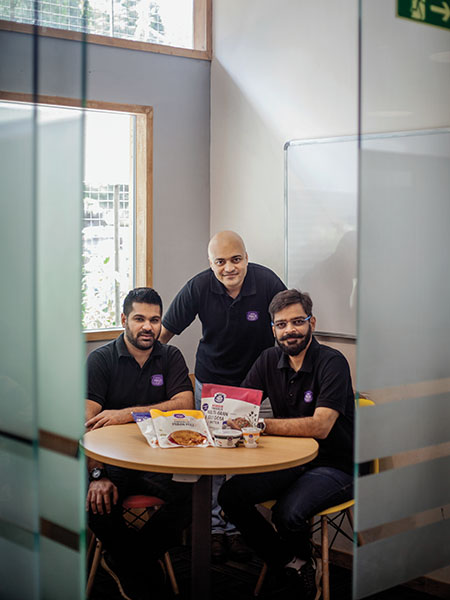 Team Fingerlix: Varun Khanna (left), Abhijit Berde (centre) and Shree Bharambe
Image: Aditi Tailang
In the decade that Shree Bharambe, 47, spent as a marketing professional, there was one trend he knew India’s housewives would wholeheartedly attest to. “While our lifestyles have changed, we are quite traditional when it comes to food. We still want our three freshly-cooked meals a day,” he says. Cooking had become one among many responsibilities and what came up recurrently was an urgent need to simplify the kitchen.

With ready-to-eat brands clogging supermarket shelves, Bharambe and his colleague Shripad Nadkarni, 57, realised that the opportunity lay in the market for fresh food—defined as anything with a shelf life of seven to 21 days. An initial plan to get into home delivery of fresh food was quickly shelved as preliminary research showed that with small order sizes, the economics of the business had a slim chance of working out. 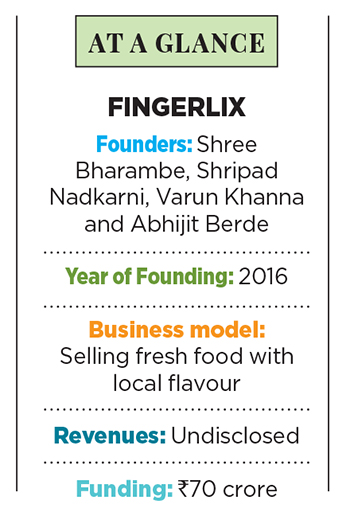 Unlike packaged food, which stays on the shelf longer and doesn’t require refrigeration, fresh as a category is far more difficult to get right. Still, if they got the product right, were able to forecast demand accurately and cracked the distribution challenge, they reckoned the model is a highly scalable one. The only nagging question they had was whether India was ready for disruption in the fresh food space. Eager to find out, Bharambe, Nadkarni and another colleague from their marketing consulting firm MarketGate, Varun Khanna, decided to test what is a relatively virgin market. Bengaluru-based iD Fresh Food competes with Fingerlix in some product categories, but its selection is not as extensive.

Taste of India
Fingerlix, which started operations in May 2016, also recruited chef Abhijit Berde, 39, who, by his own admission, spends a disproportionate amount of time experimenting with recipes. He needs to get them right for a particular region—the sambhar sold in Delhi is different from the sambhar Finglerlix sells in Bengaluru. So while people in North India won’t accept coconut in their fresh food, those in South India like their food to look red. In Delhi, the sour taste is usually associated with South Indian food and recipes have to be tweaked to accommodate that.

Fingerlix has 13 different products comprising parathas, idli and dosa batters as well as a recently launched pineapple halwa, which it claims is doing well. Berde has had to withdraw curries from the market as he realised customers want a product that is 95 percent ready. The chettinad curry that Fingerlix put on the shelf was about 70 percent ready leaving scope for customisation. “That is something customers found too much to do,” says Berde, who at any given time is working on at least five new products to be introduced. His only limitation is the finite shelf space available to the company at supermarkets.

Berde mentions that scaling up recipes presents its own set of challenges. “Making 100 kilograms of a product is not as simple as multiplying the recipe for 1 kilogram a hundred times. We have developed our own proprietary techniques of doing this,” he says. Another limitation is automation. There are no machines to make parathas on an industrial scale and one reason why Indians dislike frozen parathas is because they are made from donut machines. As Fingerlix produces larger quantities, it will probably have to work on making its own kitchen equipment.

For now, Fingerlix products are available in modern trade outlets across seven cities with kitchens located in Mumbai, Delhi and Bengaluru. Bharmabe and his team were aware of the acute need to stand out in supermarket shelves.

Elephant Design, which has worked with beverage brand Paper Boat and Greek yogurt label Epigamia, is responsible for Fingerlix’s hard-to-miss packaging. “The pack is the only opportunity you have to get your message across. We worked on handmade designs that show the fresh ingredients that come into our food,” says Ashwini Deshpande, co-founder, Elephant Design. Members of the founding team are all Asterix fans and the suffix ‘lix’ kept coming up in their initial discussions. Fingerlix and the logo, a cauldron, after Asterix’s magic potion cauldron, came out of these inspirations. (An initial idea to name the company Obelix was quickly shelved as they realised many Indians may not be familiar with the character.)

While Fingerlix declined to provide revenue numbers, company officials did mention that same store sales have quadrupled in the last year. The company sells 600,000 parathas a month and 150,000 kilos of dosa batter a month. Bharambe mentions that Fingerlix’s stretch target is ₹1,000 crore in sales in the next five years.

While there are no estimates of the market size for fresh packaged food, the total food market in India is estimated at $200 billion (₹140,000 crore). The company and the food category in general operates at 60 percent gross margins. Once the business scales up, net margins should settle at 12-15 percent. The team has so far raised two rounds of funding for a total of ₹70 crore and venture debt that is being used for kitchen automation.

In addition to the recipes, two areas that are key to success are logistics and demand forecasting. Being a highly perishable product, getting to stores quickly is crucial. Fingerlix decided against outsourcing and has wet leased trucks. The company adopts the replenishment model and products are delivered directly to stores.

It also now has enough data to forecast the quantity and type of product it needs to send to a particular store. Getting this right is key to minimising the number of returns as well as reducing the need to resort to discounting to get rid of products close to the expiry date. “We can predict how many laccha parathas will be consumed in Matunga over a weekday and over a weekend,” says Varun Khanna, vice president, sales and operations, at Fingerlix.

The next three years should see it expand to 25 cities across India along with an entry in East India. “Any city that is overnight distance from our kitchen is an addressable market for us,” says Khanna. Expect Fingerlix’s products to be available in cities like Jaipur and Chandigarh soon. While there is a lot of pressure on the company to expand to smaller cities like Jabalpur, Fingerlix plans to take its time in doing that. Spreading itself too thin is a fear the founders are conscious of.

Brand-building exercise
For the time being, Finglerix has had to rely on its packaging as well as sampling to power sales. In the two years since its launch, the product has proven itself among early adopters. There’s also discounting, which allows fence sitters to try the company’s products.

Bharambe says this will progressively reduce as Fingerlix works on moving its products from a utility to a brand. “We’re not even in the first lap of the brand building marathon,” says Prayank Swaroop of Accel Partners, investors in Fingerlix. As a thumb rule, once a brand crosses ₹500 crore in sales, a national advertising campaign can be followed.

Fingerlix took a strategic decision to focus on only one name and that should allow it to mount an effective national campaign. For now, Swaroop says he’s satisfied with the founders’ passion and the product and their relentless experimentation and new product pipeline. “Who would have thought puran poli would work in the Delhi market?” he says while adding Accel would be happy to up their investment in the next round.