In popular imagination, India’s startup ecosystem is synonymous with the posh software firms of Bengaluru, Pune and Gurgaon. While these have made the country a global powerhouse, their appeal eludes two-thirds of its population that are fighting for access to basic needs like clean toilets, good schools and hospitals. This is where a new clutch of companies have come up in recent years. These ventures are laying the groundwork for tapping these needs as business opportunities; they are not dependent on charity or grants, but on the citizens at the middle and the bottom of the pyramid to sustain them as paying customers. “The raison d’etre for all these companies is market failure at the mid- to low-income levels,” says Srikrishna Ramamoorthy, a partner at Unitus Seed Fund. “The entrepreneurs we fund are always asking ‘how can I make this scalable so I can make money because of the volume’.” Here’s a look at five such companies. 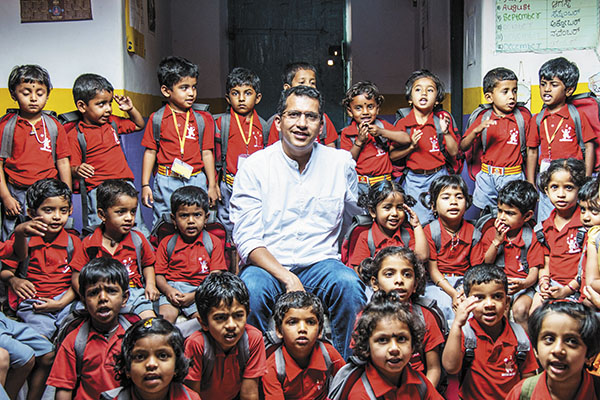 Image: Rakesh Sahai
Umesh Malhotra’s experience of building libraries for poor kids exposed him to the lopsided education system in the country


When Umesh Malhotra, 47, started Hippocampus Learning Centres five years ago, the idea was simple: Ensure that the poor get a headstart. The plan was to build and run an organisation that goes into villages and operates pre-schools (three years of schooling before class 1). “These three years of intervention empowers the children to face grade 1, where requirements are fairly stiff,” he tells Forbes India.

From 2011, when the first schools were started, Hippocampus has today expanded to 285 locations, predominantly in Karnataka, and includes 12 schools in neighbouring Maharashtra as well. These centres account for about 600 full-time teachers teaching 11,000 children five-and-a-half days a week. The company also has an 80-member staff to run operations like teacher training, meeting parents, getting feedback, enrolling children, collecting fees and running the backend IT systems. Hippocampus pays the salaries of the teachers from the school fees it collects. The fees range from Rs 3,000 to Rs 7,000 a child per year, depending on the size of the village and its economics. (The fees can be low as the programme is designed to keep costs down.)

Malhotra started his career as one of Infosys’s early employees, with an engineering degree from IIT-Madras; he worked at the IT major for nine years leading up to its listing on the Nasdaq stock exchange in 1999. He then quit to start his own IT company called Bangalore Labs, which he sold to IT services company Planet One Asia in 2002 and gravitated towards education thereafter. For the next five to six years, he focussed on building good libraries for children from low-income households. “The experience that the children were having, the joy of books… it all seemed to be a lot more fun than the IT stuff,” he says. “This was more real life and experiential.” The effort evolved into an “open source” model in which anybody could take his detailed set of prescriptions and how-to instructions and build libraries.

This experience exposed him to the education system in the country and, in 2010, he decided to enter the turbulence of that world. An early deliberate decision was to identify villages that had a “very, very long shot at being influenced” and, in 2011, Hippocampus started in the villages in Davangere and Mandya districts of Karnataka. Teachers were recruited and trained locally on a centralised curriculum.

Malhotra also had to ensure that enough families—typically villages of at least 3,000 to 5,000 people—would be interested and could afford the basic fees. The typical household income of such families would be about Rs 60,000 annually.

Today, the schools get a tablet with internet access; they also have software applications that track data about attendance, enrollment, collection of fees, student performance and rating of the teachers across villages. Parent-teacher meetings are conducted thrice a year and feedback is collected and sent back to Bengaluru.

Building Hippocampus as a for-profit also made it possible to attract venture capital funding of about Rs 21 crore, including Rs 14.4 crore in mid-2014, its biggest round to date. The funds are intended to strengthen the company’s operations, fortify its technology and expand its centres. The startup would break even at 20,000 students, Malhotra says, and that is just a year away. That is when the revenue, currently at approximately Rs 5 crore, will almost double.