Sugar daddies and babies: Inside the world of 'sugar dating' in India 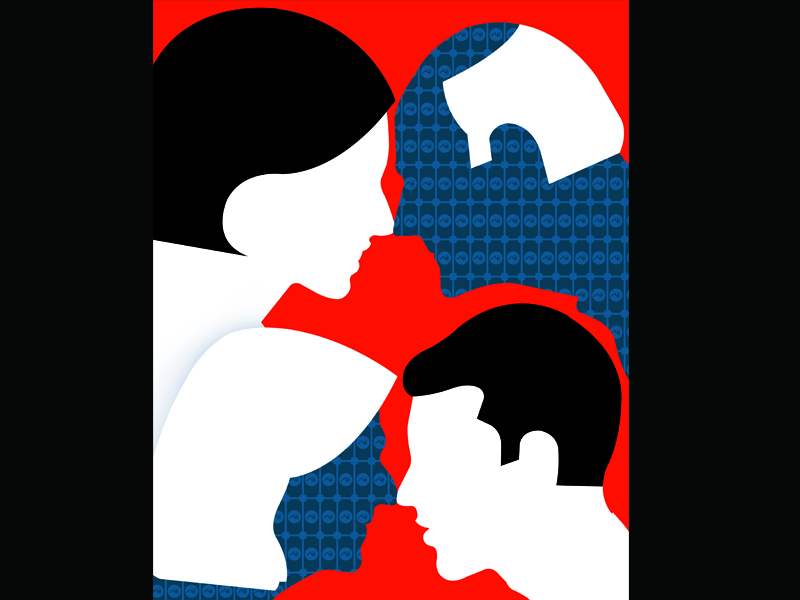 
It’s been a gruelling few months for millions of Indians, particularly the country’s young.

Stuck at home, glued to their televisions and mobile phones, devoid of any social interactions and outings during a nationwide lockdown, many have also had to bear the brunt of dwindling finances. In July alone, nearly 5 million salaried people lost their jobs, according to the Centre for Monitoring Indian Economy, taking the total number of job losses since March, when India imposed the lockdown, to 18.9 million.

But, if anything, that sense of despair never came in their way of scouting for potential relationships. That’s perhaps why popular online dating platforms such as Tinder, Hinge, Bumble and Happn have been seeing steady growth in the number of users. India currently has about 18 million users across online dating platforms, according to Statista, a market research firm.

Then, there were others such as Ankita (name changed), single and straight out of college amid a pandemic, who was struggling to find a job in an economy that is likely to register negative growth in the current financial year. “I was quite helpless since I had nobody to share my concerns with,” says the 21-year-old.

That’s when she stumbled upon SeekingArrangement , the Las Vegas-headquartered sugar-baby and sugar-daddy dating website, with a member base in excess of 22 million users globally. Unlike dating apps such as Tinder, Hinge, Bumble, or Happn, SeekingArrangement  remains relatively unknown in India, thanks to its rather controversial nature of business. For unlike the others, SeekingArrangement  is a platform that connects, what it calls, sugar-babies to sugar-daddies and sugar-mommas.

The company defines a sugar-baby as someone who knows their value and refuses to settle, especially in their relationships. “They are driven, successful, and empowered to date financially secure people who can upgrade their lifestyle,” a spokesperson for the company tells Forbes India. A sugar-daddy, on the other hand, is an older man who enjoys supporting his partner, according to the company. “Money is not an issue for these successful members, and oftentimes, work and travel schedules make traditional dating unappealing,” the spokesperson adds.

Put quite simply, sugar-daddies or sugar-mommas are looking for a sugar-baby to enter into a relationship, where the terms are clearly laid out, and in many cases involve payment in return for a favour. The latter could range from being a confidante, a mentee or in exchange for sex.  On average, a sugar-baby gets up to ₹35,000 in monthly allowances, according to SeekingArrangement , which began operations in 2006, and has been ramping up its India play since last year.

Ankita, for instance, met 48-year-old Nikhil (name changed), a Mumbai-based vice president at a multinational corporation, who recently quit his company to launch his own business. “As our conversation became deeper and meaningful, he liked the way I think and has asked me to help him set up the business,” she says. “We intend to launch it in October.”

SeekingArrangement calls this an upgraded relationship built on a foundation of honesty about expectations, says the spokesperson. “Whether it’s time constraints, polyamory, or wanting to be strictly platonic, these couples are open and upfront. We call it “Relationships on Your Terms”.

So far, the company has built a user base of 75,000 members in India, which it intends to double by next year. Their revenue is purely subscription-based. “India is a melting pot of many unique personas and a thriving urban population that essentially blows our minds, to say the least,” says Annette Joseph, the spokesperson for the group. “India’s population is so large, it’ll only be a matter of time before it becomes one of our biggest markets.”

At the height of the pandemic, when the lockdown and job losses hit India, the company saw a 39 percent spike of new members registered on the site from India and a staggering 158 percent surge of new users in India from 2019 to 2020 alone. “And the year hasn’t even ended,” the spokesperson adds.

On an average, an Indian sugar-daddy is worth $500,000 to $750,000 according to the company, with 48 percent of them being widowed, while the rest are divorced, single or in other categories. SeekingArrangement  says it doesn’t have any sugar-mommies in India, as of now. “Sugar-daddies and sugar-mommies don’t only come in the form of providing financial assistance, rather they also serve as mentors, offering financial guidance, networking opportunities and career advancements, among others—in the name of raising the bar for aspiring professionals while they’re still in university,” Brendon Wade, the CEO of SeekingArrangement, said in a statement. 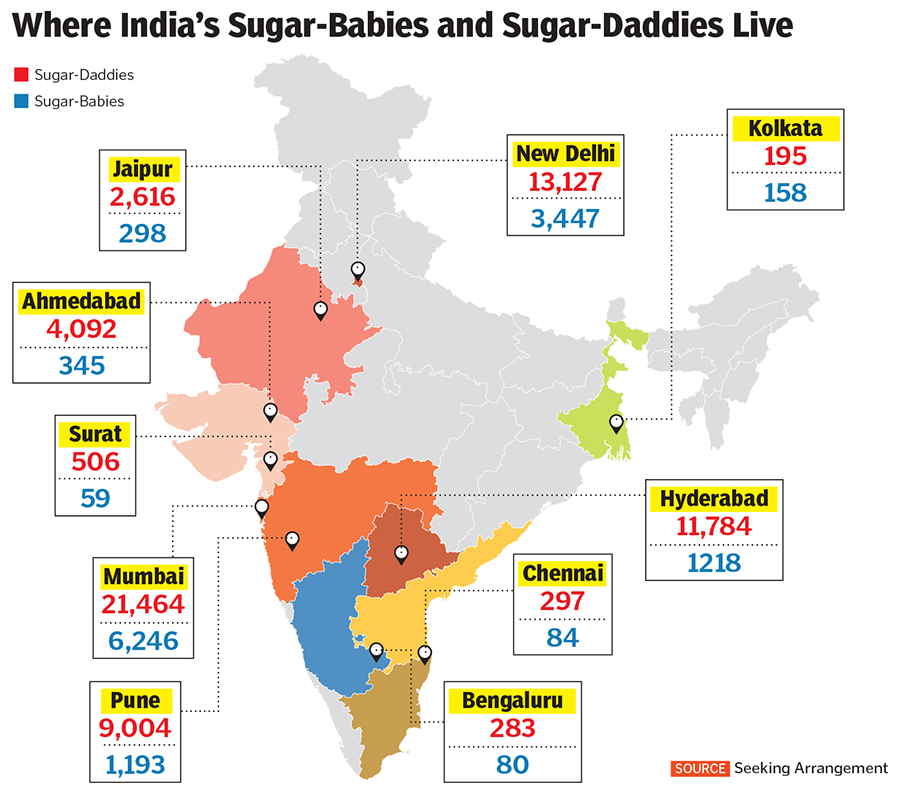 Mumbai-based Rajiv (name changed), a 46-year-old businessman had been rather unsuccessful when it came to finding a partner, despite trying out numerous dating apps. “I travel a lot and just never found the right partner who shared my mindset and interests,” he says. Around 2019, he stumbled upon SeekingArrangement  and has so far met over 10 women, with relationships ranging from coffee and movie dates to more intimate ones. Today, however, he has been going steady with Rupi (name changed), who he is also currently mentoring since they belong to the same line of business and is also trying to find her an overseas placement. “We have travelled to Greece and Croatia last year,” Rajiv says.

SeekingArrangement, however, claims that much of its success is a direct result of India’s growing unemployment rate. In 2019, India struggled with a 6.1 percent unemployment rate, which in May this year swelled to a staggering 27.11 percent. “Through our research with both members directly and credible online sources, it’s safe to say that more users have been drawn to the platform in light of India’s pandemic-injected unemployment,” the company tells Forbes India, believing that many of the members are students who had taken up education loans and are forecast to default. “Even worse, students find themselves juggling multiple jobs while in university and oftentimes end up dropping out as they are unable to cope with the mounting pressure,” adds Wade.

India’s online dating segment is pegged at $63 million currently, with the average revenue per user (ARPU) at $2.78, according to data from Statista. By 2024, the market is expected to grow to $77 million with over 26.8 million users. At the moment, on SeekingArrangement, sugar-daddies and sugar-mommas have to pay for the use, while for sugar-babies it is free. They need to indicate whether they are looking for ‘success and wealth’ or ‘looks and charm’.

Yet, for a company that has 14 million sugar-babies across the world, of which 8.7 million is in college, in comparison to 3.5 million sugar-daddies, SeekingArrangement  has also received flak for inadequate security. In 2014, Google executive Forrest Hayes was found dead on his yacht, reportedly from a heroin overdose that was injected by his sugar-baby. Then, in 2019, a sugar-baby, Mackenzie Lueck, was killed in Salt Lake City in the US, allegedly by her sugar-daddy. There have also been alleged incidents of rape, and assaults, highlighting the vulnerable situation sugar-babies find themselves in.

“At Seeking, we have a customer support team that works 24 hours a day, seven days a week from three different time zones,” the spokesperson adds. “We also have artificial intelligence, which crawls the site, looking for those violating our terms of use. Above all, we have a very strong self-reporting community, so if a member is found to be using the site inappropriately, they will likely be reported and banned entirely.”

The reservations or the moral policing a business like this could be subjected to in conservative India is “not a cause of concern at all,” says the spokesperson, “as relationships formed via the platform come like any other normal relationship. We’re a dating app after all.”

Over the past few years, India has seen the entry of controversial online platforms, including Gleeden, an app for extramarital affairs, which too saw a surge over the past few months. In May, the company had said that it crossed 10 lakh users in India. The surge was largely due to more women users on the platform, with the ratio currently at 36:64 between men and women.

“Prior to venturing into the Indian market, we did our research and found that we are not doing anything that is violating laws or harming the Indian people’s wellbeing,” the SeekingArrangement  spokesperson says. “Having had a global presence for almost 20 years and [being] a strong industry player, we are guided by insights and people behaviour of every region we are in.”

Perhaps, like many other online dating apps before them that have taken India by storm, it’s only a matter of time before more youngsters take to SeekingArrangement too. A gloomy economy might only hasten that.

Tweets by @forbesindia
Ad-vantage TV and digital
News by Numbers: Avg salary increments fell to 3.6% from 8.7% in 2020