The 16-year-old who can save your home from fire

Sixteen-year-old Shiv Kampani has created a device using IoT that detects gas leaks, and alerts users and the fire brigade via SMS and calls 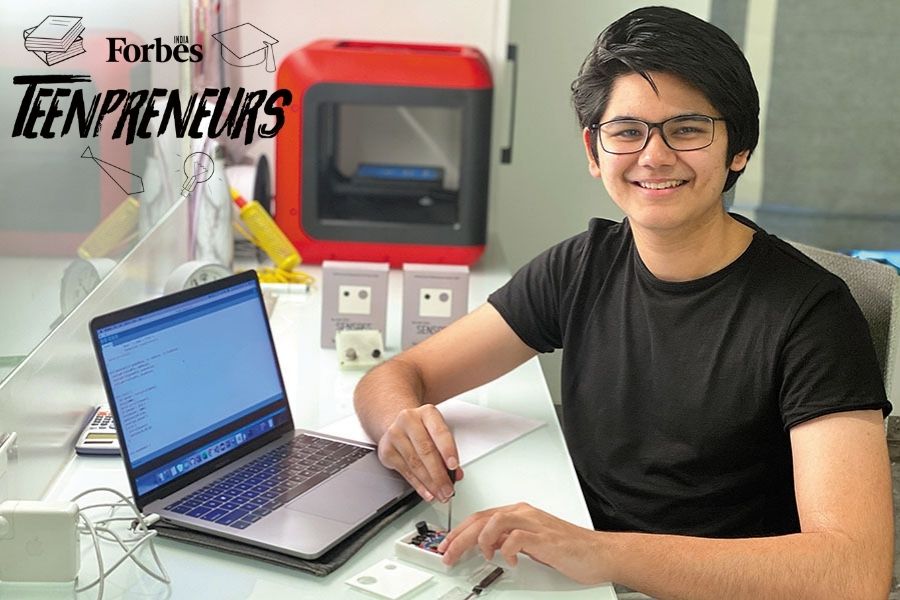 Shiv Kampani vividly remembers being in the line of fire, literally, a couple of years ago. A minor flame due to a short circuit turned into an uncontrollable blaze and covered the entire 32nd floor of BeauMondeTowers in Prabhadevi, Mumbai, on the night of June 13, 2018. Kampani, who resides in the same building, recollects how his grandparents had to climb down 20-plus floors so that they could escape unhurt. Closer to Diwali the same year, another fire took place, this time right outside Kampani’s house. The then-14-year-old woke up from his sleep around midnight because of the billowing smoke that had engulfed his apartment. “My parents weren’t home that night. It was an extremely traumatic experience… I decided to ensure that no one has to ever go through this,” says Kampani.

As the teenager began researching on the subject, he found that a number of fires take place in Mumbai every year, mostly due to gas leaks or a late reaction to them. “These fires don’t start off large, but the delayed response and the fact that they go unnoticed causes a fire to become bigger and spread faster,” he explains. If only the firemen are alerted earlier, the damage could either be prevented or minimised.

Kampani decided to create a device using his skills in robotics. After years of research and prototyping, his Internet of Things (IoT)-enabled smart gas detector Sensafe is at the second prototype stage. “The device is currently patent pending and I’m designing a printed circuit board to help me do away with the wires,” says Kampani, who is now 16. Once the patent is approved, he hopes to get Sensafe certified so that it is safe to install in homes. The current prototype is fully functional and has been installed at his home and a robotic centre.

The device senses the level of LPG, other flammable gases and smoke. It then compares this to a set of literature values (a fixed threshold) and checks if there’s actually a gas leak happening. What sets the device apart from a regular smoke detector is that, “instead of simply having the alarm go off—in which case the chances of someone not being at home to make the call to the fire brigade are high—Sensafe is IoT-connected, so it can send an SMS, email, and make an automated call to your mobile. In case you are busy, it can also forward these calls to the fire brigade”.

It took a number of trials and errors for the youngster to get the device right. Some of his initial models could only detect LPG, not other flammable gases. And they were only enabled to send SMSes and emails, not phone calls. “After some research, I realised that now my product can detect a fire 51.7x faster than the average amount of time,” claims Kampani, who set up a company, Scatter Innovations, in 2018.

However, the teenager did not realise the complexities of setting up a business—from supply chain to marketing. “I thought creating the product would be as simple as putting a few parts together, writing a code and selling it,” says Kampani. During this time, he was pursuing a 20-week entrepreneurship programme at the Young Entrepreneurs Academy (YEA) India, where he joined as a programmer. “He had a crisp identification of the problem… what he needed help with was understanding the business aspects,” recalls Namita Thapar, executive director at Emcure Pharmaceuticals and the India head of YEA. While pursuing the programme, Kampani continued working on the device, spent time doing market research and understood the importance of funding. While YEA does help with seed funding, Thapar says, “What has been disappointing for me personally is that I have not seen serious investors coming forward to support these children.”

Kampani met a number of real estate entrepreneurs to gauge customer insights and understand how relevant and user-friendly his product would be when installed. “Shiv has always had this fire in his belly. And I think that is what separates mediocrity from excellence. He is super passionate and likes to get into every little nuance of his venture, whether it is financials, market research or understanding the legalities of getting a patent,” adds Thapar.

Initially, when Kampani told his parents about the concept, they were encouraging of his idea, but never imagined he would set up a company. “At that point, it was nothing more than just an idea. But then making that idea into a reality has been an amazing journey,” says Kampani, who juggles his time between school work and company responsibilities. In November 2018, Kampani even attended a robotics festival—Robotex International in Estonia—to get feedback on his product. His plans to launch Sensafe this summer took a hit because of the coronavirus pandemic.

Apart from working on Sensafe, Kampani is working on an application that helps raise awareness about fire safety, in the form of a game. He is also working on a project called The Pipe Cleaner—a robot that can help combat the problem of manual scavenging in India. “I have visited the civic body’s sewage engineering department and based on my research, the first prototype of the robot is ready. However, due to Covid-19, I haven’t been able to make continuous visits or test the product yet,” says Kampani.

It’s not easy to manage multiple tasks, but Kampani believes his perseverance keeps him going. “Being the CEO of a company at 16,” he says, “is all I ever wanted to do and I want to continue doing that when I grow up as well.”

Teenpreneurs is a weekly podcast that features entrepreneurs and innovators under the age of 20. Subscribe to the podcast on Apple, Spotify and Google Podcasts. If you know someone who should be on the show, fill out this nomination form.

Tweets by @forbesindia
FCRA: How an Emergency-era law will alter the face of social work in India
Ten interesting things we read this week