The rise of South Indian Cinema: How Southern movies are going national 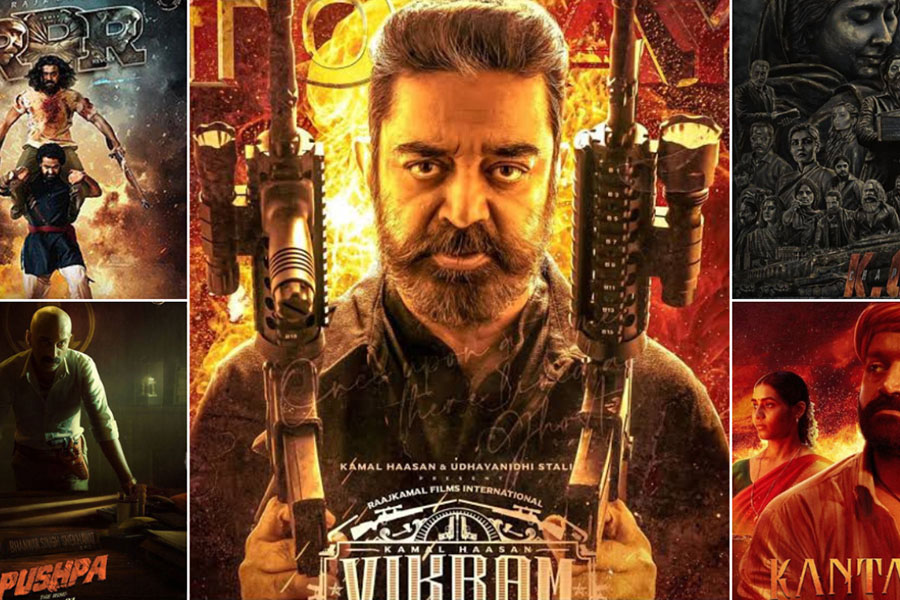 As per an EY-FICCI report, back in 2019, the domestic box office revenues of South Indian cinema stood at Rs 4,000 crore, while that of Hindi films stood at Rs 5,200 crore.

“Pushpa ante Flower anukunnava? Fireuuuu” is a dialogue every movie buff in the country knows, irrespective of the language they speak. And even if Shah Rukh Khan’s Dilwale Dulhaniya Le Jaayenge pose continues to grab eyeballs, Arjun aka Pushpa Raj’s ‘Main jhukega nahi’ gesture is a new favourite. The magic of southern cinema is spreading across India, bringing in a larger share to the overall revenue of the entertainment space than ever before.

According to the Confederation of Indian Industry, 62 percent of the overall box office collections in 2021 came from South Indian films. The numbers will only grow from here, say experts. KGF: Chapter 2’s Hindi-dubbed version raked in Rs 435 crore as overall box office collections. And that is not the isolated example of pan-India box office success of films from the south. RRR and Pushpa: The Rise Part-1 also entered the Rs 100-crore club in terms of collections. While RRR earned Rs 265 crore, Pushpa: The Rise Part-1 made close to Rs 106 crore.

As per an EY-FICCI report, back in 2019, the domestic box office revenues of South Indian cinema stood at Rs 4,000 crore, while that of Hindi films stood at Rs 5,200 crore. Cut to 2021, and the tables have turned. South Indian movies clocked in Rs 2,400 crore last year, while Hindi films generated a revenue of Rs 800 crore.

The trend doesn’t seem to be ending. Ormax Media, a consultancy with a strong focus on the entertainment business, said that between January 2020 and April 2022, the four South Indian languages contributed 57.3 percent of India's Rs 9,759-crore cumulative gross box office collections. During this period, out of the top 10 grossing films, seven were from the South. Some of the names are KGF: Chapter 2, RRR, Ponniyin Selvan: 1, Vikram and Kantara.

The pandemic-induced lockdowns and restrictions caused cinema halls across the country to suspend operations. This fed directly into a surge in people tapping over-the-top (OTT) platforms to get their dose of escapism. Unlike the traditional consumption of movies in theatres, this opened audiences to a range of viewing options, particularly from regions they had little or no exposure to, with subtitles overcoming the language barrier, and since then, the growth has been tremendous.

Apart from easy accessibility, increased usage of smartphones and the enthusiasm to explore a variety of genres made South Indian content and the industry’s reigning stars familiar to households on a pan-India level, especially in the north of India, where audiences are usually less open to experimenting when it comes to cinema.

As per an earlier Moneycontrol report, movies in Tamil, Telugu, Malayalam and Kannada broke all viewership records on Amazon Prime Video in 2021 where 50 percent of the audience was from outside their respective home states.

Rajender Singh Jyala, chief programming officer at multiplex operator Inox Leisure, said OTT helped them get well versed with the preferences of the audience. “The reach of South Indian films at present is better compared to its reception during the pre-Covid-19 times,” he said,

Jyala said southern producers were quick to notice the fact that the Hindi-speaking audience was taking interest in South Indian cinema, crunching the TRP numbers of South Indian movies on television channels, and their reach on OTT platforms. Hence, they started dubbing their movies into Hindi and began releasing them in North India.

Earlier, around five to seven southern movies in a year were dubbed into Hindi. Today, the number has increased to over 50. South Indian films have done well in the past but they were few in number.

Jyala said, “Previously, at Inox, the contribution of southern films was 20 percent. This year, the contribution stands at 35 percent.” At Inox, the box collections so far of RRR and KGF: Chapter 2 stand at Rs 73 crores and Rs 95 crores, respectively, and are touted as the big films from South India. On a pan-India level, their collections are more than Rs 770 crore and Rs 850 crore.

Another factor contributing to the rise in its viewership is the way films are being marketed. For instance, KGF’s lead actor Yash travelled to different parts of India to promote the film. To further build the hype, he also engaged with bloggers and YouTubers. This was something the northern belt saw only happening for Bollywood films. Similarly, item numbers from these films also reached out to a much wider audience than ever before. Oo Antava Mawa from Pushpa, for instance enjoyed equal popularity among fans who loved and praised Arijit Singh’s Kesariya number from Brahmastra.

When Pushpa: The Rise - Part 1 was released in the Hindi-speaking belt, it was highly appreciated, going from 1,401 screens to over 1,600 screens. As per a media report, till February this year, Telugu cinema was reportedly faring better at the box office compared to any other regional language cinema. As per an Ormax Media report, Telugu movies have seen significant growth in box office collections where they contributed 27 percent to overall revenues, compared to 12 percent in 2019.

Bijli said, “Telugu films mirror the Hindi films of the 1980s-1990s in terms of storytelling and, hence, are called massy. Tamil cinema is seeing a renaissance of sorts of the old guard where Vikram and Ponniyin Selvan: 1 are proof. That perennial underdog, Kannada cinema, has joined the party with the KGF series, 777 Charlie and Kantara.”

Jyala agreed, saying that out of all the four South Indian languages, the box office collections of Kannada movies used to be the lowest, despite the number of movies made in Kannada being the highest.

Earlier, if the box office contribution of Kannada films at Inox was 3-4 percent, this year it has increased to 15-16 percent. This is due to movies like KGF: Chapter 2, 777 Charlie, Vikrant Rona and Kantara. He added, “Mass viewership was always seen for Tamil and Telugu films. Malayalam cinema has a niche audience. But this year, Kannada cinema has found a fan following for itself.”

But it’s not like it’s all smooth sailing. Bilingual film Liger was released on August 25. The marketing was done on a grand scale, tapping into the star power of Telugu star Vijay Deverakonda. After its release, the movie was critically and commercially panned and the producers could not recover the cost.

This proves content is the ultimate king. “Today, audiences are connecting to a story and are increasingly becoming genre- and star-agnostic. If the content does not excite the audience, they will not connect with it. Liger and (T Acharya have been a disappointment at the box office despite tremendous star value,” pointed out Bijli. The Telugu movie Acharya boasts Ram Charan and Chiranjeevi as part of its cast.

Echoing Bijli, Jyala said, “Marketing can attract the audience for the first day, first show. Along with marketing, if the content also is good, then it can work in the film’s favour. If the content is good but the marketing is not grand, you will see the movie pick up good viewership either starting from Friday evening or Saturday morning.”

Will South Indian films hijack the aura of Hindi films?

Since the reopening of the cinema halls, Hindi films like Gangubai Kathiawadi, Bhool Bhulaiya 2, Kashmir Files, Vikram Vedha and Brahmastra have performed well. “But we are still not close to how the scene for Hindi movies’ box office collections were in the pre-pandemic era where their contribution was the highest,” said Jyala.

As per an Ormax Media report, Hindi films’ cumulative share in 2020 and 2021 is 28 percent. But it is lower than the pre-pandemic years where it was 43 percent in 2018 and 39 percent in 2019. This year, 42 percent of the Hindi box office collections have been driven primarily by dubbed versions of KGF: Chapter 2 and RRR.

When the cinema halls were not fully operational, some much-anticipated Hindi films could not get released. By the time cinema halls opened up, though, things had changed dramatically. “Those films were supposed to be released when the pandemic struck. But the audience and their choices evolved all thanks to OTT. There is a possibility that for an evolved audience, those movies became outdated,” added Jyala.