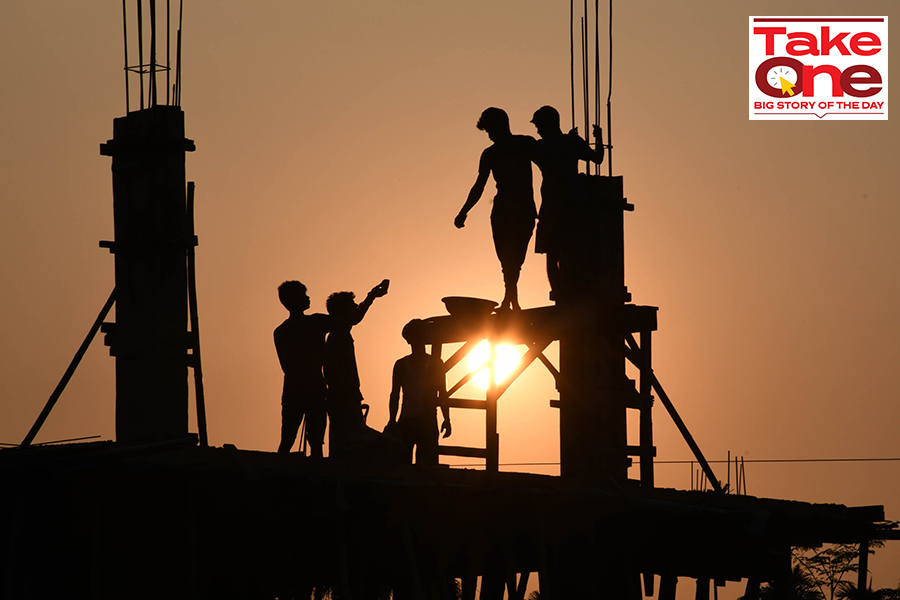 Business activity returned to normalcy in the second quarter.
Anuwar Ali Hazarika/Barcroft Media via Getty Images Second quarter numbers for a large swathe of corporate India point to business activity returning to normalcy. Sales are up, margins have held steady or recovered and profitability has surprised on the upside. As a result, analysts and industry watchers have scrambled to reassess their view on the impact of the pandemic on company financials. But the strong numbers mask the fact that much of the growth in profits has been on account of a significant reduction in fixed costs—employee expenses, finance costs and savings on account of power, fuel and travel costs. Apart from finance costs, which are expected to remain low for the next 18-24 months at least, it remains to be seen how many of these cost savings sustain. For now, it’s clear that corporate India, with its furious cost cutting, has probably its leanest balance sheet and cost structures in a decade. Once growth recovers, this should give them a disproportionate bump in profitability in the short term. “While travel costs and advertising will come back as sales recover, the more intriguing question is around the technology investments companies have madeto reduce costs permanently. I suspect the big companies have done that,” says Saurabh Mukherjea, founder of Marcellus Investment Managers. The extent of savings varies across industries and can broadly be divided into three categories. First, an increase in top line resulted in a disproportionate increase in bottom line, primarily on account of a reduction in fixed costs. In the case of Ultratech Cement, while top line rose 7 percent to Rs 10,354 crore, bottom line was up 55 percent to Rs 898 crore. The increase of Rs 320 crore was only on account of a Rs 356 crore cut in employee, finance and fuel costs. (All comparisons in the story are for Q2FY21 and Q2FY20). These are the cost reductions that are most likely to sustain, as the cost of money is likely to remain low for the next two years, at least benefitting companies with long-term debt as well as working capital limits. Fuel costs are also likely to stay lower than in the last two years; and while employee costs are specific to a particular industry, both managerial staff and workmen are likely to have low wage bargaining power. In the second category are companies with an increase in top line but low growth in bottom line. In all cases, companies cut fixed costs or saw them rise at a rate lower than the top line. This is primarily on account of low pricing power and portends badly from a one-year perspective. If sales slow down, there could be a disproportionate fall in profits. These businesses did see flat costs but that was not enough to drive profits.

Examples of such companies are primarily in the consumer space. Take Whirlpool India, which saw revenues rise 14 percent to Rs 1,599 crore, a 43 percent reduction in fixed costs but only a 4 percent rise in bottom line to Rs 128 crore. This could be on account of heavy promotional activities that consumer goods companies took to push sales. Voltas saw sales rise 12 percent, fixed costs rise 8 percent and profit fall 25 percent. The story repeats across other consumer businesses like Hero MotoCorp and Asian Paints. In both cases, top line grew faster than bottom line. “One of the reasons these businesses did better was on account of better availability of credit,” says Abhimanyu Sofat, head of research at IIFL. The cost of finance offers is usually split between the manufacturer and the finance company, which explains the lower margins. Another set of companies is those that had seen poor performance over the last three years. They too moved to cut costs and saw a lesser fall in bottom line as a result. While top line fell, the cut in fixed costs cushioned the fall in bottom line. Real estate and engineering companies are two prominent examples in this space. At Cummins India, revenue was down 12.6 percent to Rs 1,151 crore while fixed costs fell by Rs 32 crore or 5 percent. This cushioned the fall in post-tax profits, which dipped 5 percent to Rs 173 crore. Sobha Developers slashed fixed costs by Rs 815 crore or 24 percent. These businesses are also well positioned for an increase in profitability as fixed costs are unlikely to rise rapidly. According to Sofat of IIFL, corporate India’s situation is now akin to 2003 when companies had some of the leanest cost structures on account of slow growth in the preceding half decade. What this resulted in was a disproportionate rise in profitability when growth kicked off in 2004. “Sunk costs will come back but usually with a lag,” he says. Also, what is different this time is the argument that technology can reduce costs. Some cost reductions like lower travel, increased automation and lower power and fuel costs could be permanent. Last, information technology companies and banks were in a unique space. Banks saw their cost of funds fall and loan moratoriums made it hard to decode the bottom line, as not all banks followed uniform provisioning practices. Large IT outsourcing companies—TCS and Infosys—both saw higher demand for their services as well as higher employee costs. At Infosys, revenue was up 8.5 percent to Rs 24,570 crore while employee costs were up 5 percent to Rs 13,400 crore. Ditto at TCS. Revenues were up 2.9 percent while employee costs rose 5.5 percent.